Want to know how to make diagrams and kifu in the style of old Japanese books?

廿 and 丗 are non-standard but are very useful for long diagrams, avoiding font shrinkage.

For how to apply the labels, see my tutorial at Review request (lowly kyus) - #9 by bugcat – tl;dr the A label tool has a shift menu that accepts custom inputs. 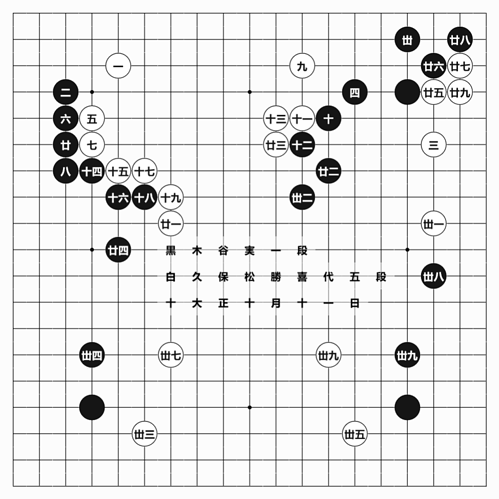 Your energy and creativity to open “new doors” in go is remarkable.

Any ideas on how to force vertical text?

Find a fancy way of inserting a newline character without pressing enter?

You can’t just copy-paste a two-line sequence in; the newline is converted to a space.

There are two 39th moves (which brings the question: how to label 40?)

By the way, my software BesoGo has a book theme and allows Unicode labels

I think vertical text could be achieved with a simple CSS tweak, but I’d need to check that.

Jisho suggests that forty has a kanji 卌.

Here is one possible syntax.

Note that this system is only based on Japanese numbers, and contains many innovations, with the intention of avoiding three-character numbers.

These looks exactly the same to me o_0

Let’s remember how it was done in real life. I probably already wrote it somewhere, but let’s repeat. I may also forget things.

Up to 19 it’s all obvious and normal. 20 is 廾 as was discussed, and then 21 is 廾一 and so on. Similarly 卅 is 30. But starting from 40 we come back to the usual 1-10 numbers 四十, 四一 and so on. I haven’t seen 卌. Hundred is 百 but for the moves after hundred we also use usual numbers, so 143 is 一四三, it’s convenient because when we write vertically 一 takes up little space.

First 四 can be written as 罒 (centered, of course), let me try to draw it

Since we don’t need to save space writing single digit 4 and 5, we can use “full” form for these two numbers and use “space-efficient” form for later numbers.

20 and 30 can be written as 廾 and 卅, of course. But nothing’s wrong with using 二 and 三 just like with 40+ numbers. For example, 21 would look like 二一, and since it’s written vertically try not to mix it up with 三.

Hundred is 百 but we can also be written as 口 and then numbers like 103 can be written 口三 to make it less annoying to write. Note that when we write 103 as 口三 we can still use 百 for the #100 move because when this symbol is alone, we don’t really need to save space.

Additionally, I feel the year is written like this: 大正十年

On second inspection, 弌 is the legal 1 but the legal 2 is 弍.

The legal 3 that I wrote as 弐 can also be 参.

From BasicJapaneseForReadingGoBooks/discussion at Sensei's Library

The Iroha order, a transcription of a poem of the Heian period, runs