Menu glyph can be confusing next to the OGS logo

I’m noticed in chat that we often get people asking very basic questions like “Where do I search for people?” The glyph from AwesomeFont currently used for the menu in the upper left corner is very close to the Logo, so it can be easily overlooked. I highly suspect many casual users don’t know there is functionality in the site because they can’t find this menu.

I didn’t realize it was there for many months before someone showed it to me.

Here is a possible suggestion for changing the UI.

I also agree that it is not as visible. It took me time to find it, especially since I am using the website mostly on mobile most of the time.

Your screenshot seems quite mysterious to me. On my screen, the three-bar glyph indicating that there is a menu is very obvious:

Curiously, the menu item next to the OGS logo on my screen is called “Home” wheras yours is called “Menu”.

Is something messing with your OGS?

@GreenAsJade: The screenshot was a suggestion how it COULD look. And the ‘very obvious’ is what has been contested by the other 2 posters.

@richyfourtytwo beat me to answering you, but yes, I hacked the output of the site and changed it subtly. I’m a web designer/developer so I have those tools readily in hand and it’s trivial to change a way a site looks for my own purposes. I’m also a usability expert so I’m trying to help.

In this case I wanted to show a possible alternative layout which didn’t remove any functionality but did immediately give access to something that quite a few people have asked about on the chats.

When I see so many people coming to chat (normally a last resort, representative of a minority of extroverts) then I intuit that there’s a much larger number who either gave up or had to look hard to find the answer themselves.

I think the site would be well served in either creating separation between what’s meant to be a menu button but is easily mistaken to be part of the logo or to move that functionality to a slightly different location. ( I don’t have the statistics, but my hunch is that few people click the home link in the top navigation )

Another option would be to move the menu icon to the right hand side like it is here in the forum. The search could even be split into a separate icon.

Yes, that’s a viable option, although not as easy to mock up with a few hacks like I did my example.

However they might address it, it would be nice if we could first agree that there’s a problem.

That was my primary purpose for posting an alternative, was to give people a sense of what it might have looked like if another designer had done it… and the possible repercussions of such a change.

No, I use the home link all the time! The black circle with number of games awaiting my move does not cycle through the games in order of least time left first, so if I do not have time to play a move in all my games, I go back with home to find the next game with lowest time left.

So, Please don’t remove it or change its function?

with home to find the next game with lowest time left.

Note in the design idea I had, the Home functionality is moved to the Icon… clicking the Icon would take you home. You’d lose absolutely no functionality and I would never suggest people should lose functionality. I’m suggesting a change to help people find the menu which is currently “hiding in plain sight”.

So go back to my original post and look at the layout, if you clicked on the OGS logo, you would go to the home page.

FWIW, I’m not in favour of a menu item called “Menu”.

I think there are other options, “Tools” etc… but this:

Doesn’t seem to be working for a large number of people.

Its strange, because that glyph universally means “here are more options if you click”. I suspect that it is generally positioned on the right, though, when it has that meaning.

In fact, check out the top right of this forum, which is completely different software: there is the ubiquitous three bar glyph telling you that “there’s more”.

On OGG, with it in the top left, it just looks deceptively like part of the logo, or a decoration, I guess.

One alternative is to put a small right facing arrow in the top left, which you click on to make the left bar pop out.

Its strange, because that glyph universally means “here are more options if you click”. I suspect that it is generally positioned on the right, though, when it has that meaning.

I agree. Hence my earlier suggestion to move the icon to the right-hand side.

The right hand side is also conveniently where the in game menu is located. It could make a certain amount of sense to have all our menus on the same side, however style wise top menu and lhs menu are standard practice and rhs menus are quite rare (due to English being a left to right read language)

Yes, the forum software shows current “best practices” and the menu icon is exactly where you expect to see it… and the resulting menu pops under the icon, it doesn’t slide in from the right or left.

My observation is that this icon on the OGS site get’s hidden from normal view because it is either confused with another graphical element (the OGS logo) or it’s not in the corner people normally see it.

So while the menu icon (three bars) is common enough, its location is suboptimal and get’s missed by users, which is a bad feedback loop. Older users are blind to the problem because they’ve become used to it; “Doesn’t bother me,” they say. Of course not, you’ve been trained to find it and now it would feel odd it was moved. This ends up being the only logical reason not to move it… existing user habits.

You can’t just put the menu glyph anywhere you want and think it’s going to magically work. For example it doesn’t even have alt text, so you can’t hover over it and get a tool tip telling what it is (try hovering over it in this forum to see what I mean.)

Even stranger is that the entire logo brings up that menu, not just the three bar glyph. What is normally a way back to the home page (clicking the site logo) is now a navigation tool to bring up more options… without any indication that this is the case.

BTW, I did try using a arrow and a triangle pointing right, but these just seemed to make the confusion of the glyph being part of the logo worse and didn’t look like navigation elements at all. You can try it yourself with a little on page editing. 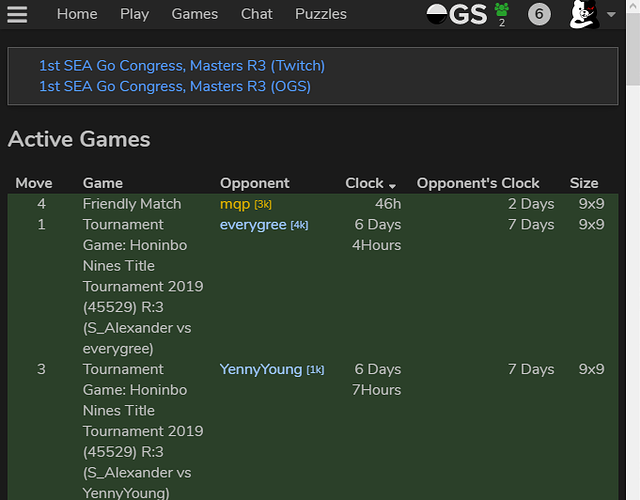 If anything, I would propose combining the OGS logo with the Home button, as that’s quite standard online, and then comining both the menu’s together over on the right where menus normally go 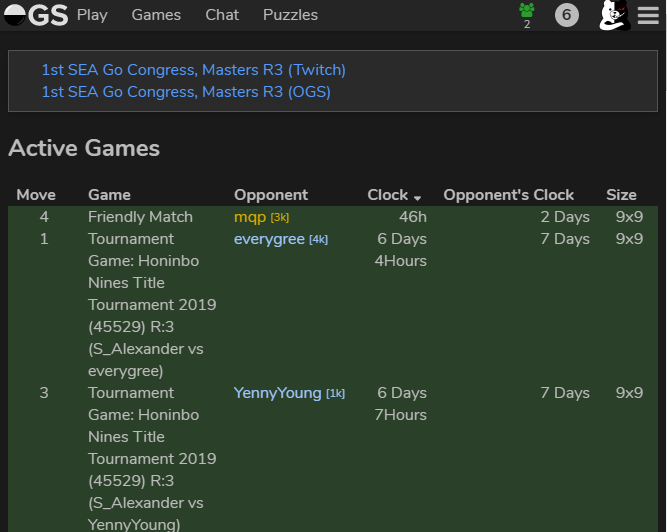 Yes. That looks much better.

You could even consider swapping the order of the two menus on the right-hand side to make them consistent with the forum, but that is a minor point.