For anyone who’s been lingering about these forums during the past few months, you know the drill: this is the part where I announce some annual event in the hopes that it’ll survive the turn of 2020. But please bear with me a little longer, because this is not it. Believe me, I have tried, and it’s a pain in the neck…

… (also, I keep my alternative accounts safely tucked under a low profile

What is this about, then?

Besides Go, I like playing games, solving puzzles, and that kind of stuff. I remember the Mathematics Room on KGS, where they would post a few interesting problems every now and then. I’m not sure if it is still active, but I don’t aim to make a copycat of that, rather, something more varied and accessible. I love the idea of online puzzles of the likes of notpron, even though I could not create (or solve) such a thing.

So, I recycled this group, where (for now) I intend to be posting games and puzzles somewhat regularly. I’m very interested to know if you have challenges of your own, for discussion on this thread, all in good fun.

To whet your appetite, I’ll leave you with two opening trivia:

If you answer one of these, I’ll invite you to our first mini-tournament. Just because.

EDIT: Please, as a general guideline, don’t spoil the answers to these puzzles. You can send Private Messages to the puzzle creator if you want to check if your answer is correct

You can also use the following template:

New problem of the week is out, give it a try


Please remember not to spoil the answer, you can send a Private Message to the puzzle creator instead. Discussion is otherwise encouraged.

Oh, the detail tag did work for you? I couldn’t make it work for myself. (EDIT: it works now, I must have made some sort of mistake)

I’m afraid that is not the answer,

New problem, not as cryptic as the last one

If the radius of a circle is 2 units
and the radii are two sides of a right angled triangle
What is the area of the segment created
by the hypotenuse and the segment arc?

What is the arc length of the segment?

Please remember not to spoil the answer (read the first post), you can send a Private Message to the puzzle creator instead. Discussion is otherwise encouraged.

One of our newest members came up with this puzzle invloving some “epistemic trickery”.

Can you tell what do you know that he knows that you know?

A teacher is testing his best students Albert, Bernard and Cheryl with a little game. He glued a piece of paper with a number written on it on each of their foreheads and told them that one of their numbers is the sum of the other two numbers, and that each of the numbers are between 1 and 5. The students can’t see their own foreheads, but they can see each other.

After the explanation the teacher asks Albert if he knows what number he has, to which Albert responds “No sir, but I know that Bernard also doesn’t know it”. The teacher then turns to Cheryl and asks whether she has the largest number or not. Cheryl, smart as she is, thought for a few seconds and declared “I didn’t know it before Albert answered your question, but I do know it now whether I’m the largest or not!” and then she proceeded to write the answer on a piece of paper which she showed only to the teacher.

During lunch break Diana, friend of Bernard’s, told him that she’d been eavesdropping the conversation, but that there was something still bugging her. “What was going on?” she asked. "Well," Bernard responded, “if you had lined us up in alphabetic order, you could have moved one of us towards the front of the line and get the numbers in ascending order”. Somehow, Diana was satisfied with this answer.

Please remember not to spoil the answer (read the first post), you can send a Private Message to the puzzle creator instead. Discussion is otherwise encouraged.

I present to you another epistemic puzzle, my personal favourite:

Albert and Bernard are being tested by their teacher once more. He gives them both a little note with a number on it, and he tells them both numbers are different from each other and of the following form for n and k natural numbers larger than 0:


Then the following conversation happens:

Which numbers are written on Albert’s and Bernard’s notes?

I’ve hidden the name of a go player in the following picture (top 500, with his / her name spelled as it is on goratings.org). 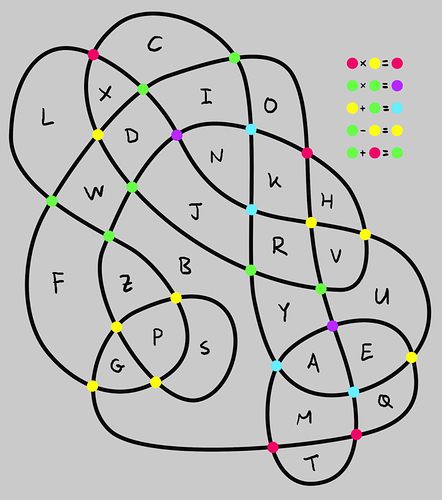 Problem #18: Matches on a Goban

I have a box with 21 matches and a single coin. I discovered that the coin fits (almost) perfectly inside one of the squares of the board, and that the matches have a length that they take up three squares if placed vertically or horizontally.

Find a way to put all the matches and the coin on the board such that each square is touched by exactly one match or has the coin on top of it.

For example, one could start as in the following picture: 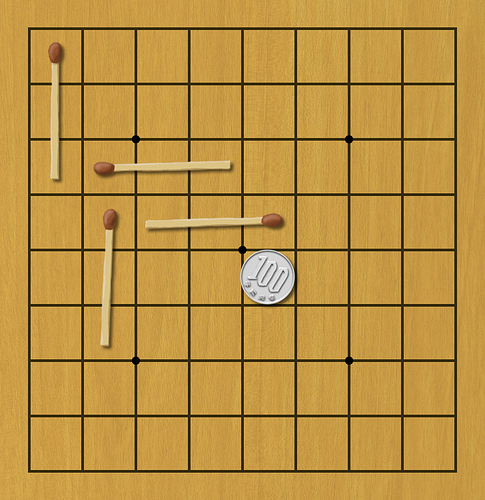 [N.B.: It is not a trick question: the matches don’t have to lie partly outside of the board, nor do any of the matches have to cover more than three squares, nor do they have to lie in a position that isn’t horizontal or vertical]

Is there a way to fill the board with the matches when the coin is placed as in the picture above?

I’m stumped by this one:

Holmes once had a visit from an old acquaintance whom I had never met before. I found them chatting freely in a way he seldom did with me as I came in to offer them some tea.

“And how are your children?” Holmes was asking. “You have three, if I remember rightly, although I must admit I don’t quite recall their ages.”

“You always enjoyed deduction, didn’t you, old chap?” his acquaintance replied. “What if I told you that the product of their ages was 40?”

“That’s not quite enough information for me to deduce their ages,” said Holmes.

“Alright, well I shall add that the sum of their ages is the number of years we’ve known each other.”

“Finally, the youngest was our first summer baby, born in July.”

Holmes suddenly turned to me. “Why don’t you tell this gentleman the ages of his children, then, Watson?”

I balked. “But I don’t know how long you’ve known each other!”

“That doesn’t matter, Watson! You now have enough information to deduce it.”

And indeed I did. How old are the three children?

Do you want this published in the group news? We haven’t updated in a long time

Sure, I don’t mind that you do. I’m not the author of this riddle, of course, and I don’t know the answer.

I love it! It reminds me of Conway’s bus wizards.

Last night I sat behind two wizards, Azemelius and Bartholomew, on a bus. I heard this conversation:

Bartholomew (looking at the number of the bus): Perhaps if you told me your age and how many children you had, I could work out their ages?

Azemelius: No, you could not.

Bartholomew: Aha! At last I know how old you are! (Bartholomew had been trying to find Azemelius’s age for a long time.)

What is the number of the bus?

(shamelessly copied from this site)

I still can’t get over that he passed away. RIP

He puts them in seperate prison cells, with no communication to one another. However, he offers a way to escape.

He gives Alice the sum of two distinct positive integers greater than 2 and less than 100, and Bob the product of them.

“I gave Alice the sum, and Bob the product, of two distinct positive integers strictly between 2 and 100. Every night, at 8:00, I will come to each of you, first Alice, then Bob, and ask if you know what the two numbers are. You may pass, or guess. If one of you guesses correctly, you will both be freed. If one of you guesses incorrectly, you will both be stuck here forever! Good luck!”

The first night, Alice passes, and then Bob passes. Bob wasn’t sure if Alice would be able to figure it out, but the next night, Alice does get it right and both are freed.

Assuming Alice and Bob would escape at the first possible opportunity, and do not take any chances, what are the numbers? What would they be if the sum was even (2 solutions)?

(another edit: I forgot to state that Bob wasn’t sure whether Alice would know. That’s quite an important point, otherwise there would be 2 more solutions for both the odd riddle and the even riddle.)

For clarification, is it