At one point in my life I tried learning keyboard (spoiler: I’m about as good at it as I am at Go). Pandemic lockdown works in mysterious ways, so I figured why not try playing?

Does anyone know where I kind find sheet music that

Always good to try new things. You won’t be good when you first start, or sometimes it takes a while to get good at something. It will happen sometime, you just have to spend time doing it and trying your best. I don’t play an instrument besides my attempt to play a ukulele, so I am unable to recommend music for you. Sorry I am unable to do so for you. Good Luck learning to play your keyboard though

You don’t need to know the theory behind the music you’re playing, but it makes it a lot easier to communicate about music, in some ways to perform it (since it might help in understanding the function of the notes in the music) and definitely in composition / analysis (since you’ll be able to describe why you like something, and not something else).

However, for a beginner, I would recommend to ignore music theory for now, and simply work with the idea that A, A♯ / B♭, B, C, C♯ / D♭, D, etc. refer to certain keys on your piano, and focus on pressing the right key at the right moment.

Final comment: if you want to learn the thing, don’t go searching for ‘training wheels’, but learn the actual thing. The faster you’re able to read scores and tackle chords, the easier it becomes to learn piano. It’s easier to learn Korean correctly if you start with learning the alphabet and then do everything with the Korean symbols, than if you start with learning things using crutches (such as ‘phonetic’ transcription of Korean in Latin letters) and have to switch back later.

It’s been a while but Solfegio is mostly for singing, most sheet music may have chord listings at the bottom, but generally don’t show note-for-note, none that I’ve used anyways. I’m sure they are out there, but yeah maybe there are all Mary Had a Little Lamb, etc. When I learned to read sheet music I would always write everything out on the top or bottom to help me read along. It’s hard and I’d stumble even now going thru it… Keyboards are laid out as letters… abcdefg, along w/ the sharps or flats… so do in the solfege would always be the first letter of the scales your playing…

Long story short is that in reading sheet music it’s hard to cut corners and still get by. It’d be easier youtubing colorful videos that literally show you what keys to play.

I’d suggest just going for a webpage that generally helps you to read sheet music, or just like Sheet Music for Dummies or something like that. It would feel daunting to jump into it without some knowledge of how scales work, the wheel of fifths, etc. I could dig out my old music theory book and see how cumbersome the lessons are, I doubt it was much more then 20 bucks.

Another quick no before I jet back to work: Most piano sheet music will have both clefs, the treble and bass clef, one for each hand. So I have seen books where they give a number above the note to give you a reference as to what finger to use. Sometimes this is helpful.

I would start with Ye Ol’ Google: https://www.google.com/search?q=solfege+worksheet+filetype%3Apdf

As others have mentioned, it’s hard to answer the question, because solfege (do, re, mi, and so on) is a movable technique for singing in any key. By contrast, composers write piano music in a fixed key (C major is the most basic). So if you’re not comfortable with keys yet, I’d look for solfege worksheets (or songs in C major) and write the solfege notes below each music note as appropriate. In the process, I think you’ll pick up the basics of keys!

I do this for guitar/ukelele all the time:

Here’s an example of an Adele song: 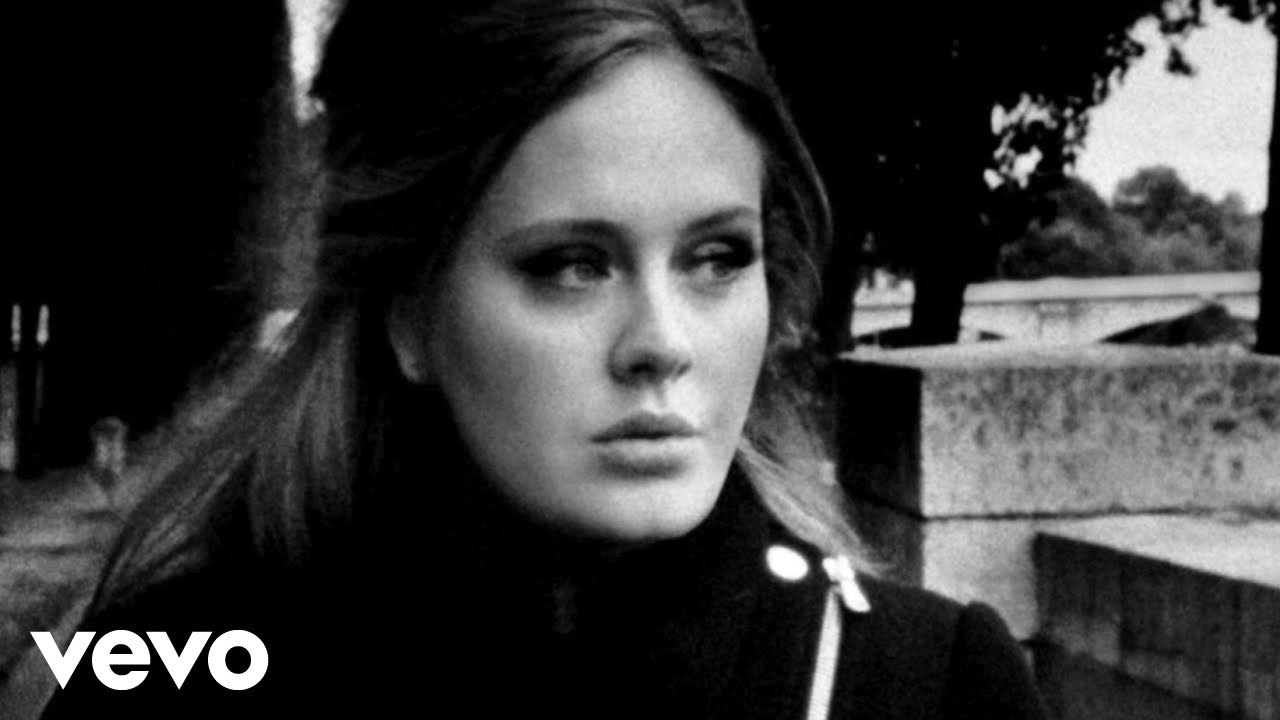 Interactive chords for Adele - Someone Like You. Learn to play with piano, guitar and ukulele in minutes.

Some sites are 100% free. Some sites will give you a certain amount of freebies and then ask you to sign up. Just investigate the options and see what’s out there.

I would google “[name of song] simple piano” and check the image search results. 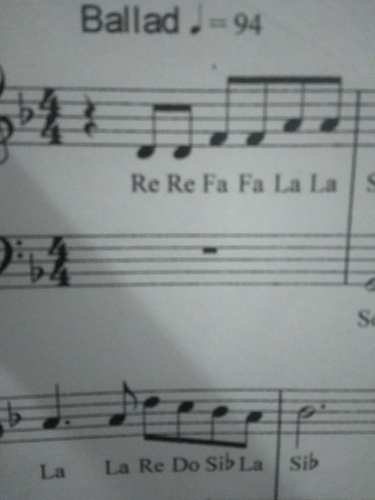 EDIT: For the record, I’ve learned this song and can play it to the best of my abilities, nobody in the room complains. I just can’t find other similar sheets.

I like you all very much, and thank you for taking the time to reply, but I don’t want to learn anything more than I already know. The same as how I am with Go. I don’t want to learn the A, B, C system, or chords, or devote studying time.
Google gives me sheets with the results I mentioned above and these don’t work for me.

No wonder you are all good at what you do, but please don’t forget I’m a lowly form.

(Still like all of you very much and thank you).

That looks awful in my eyes, though.

There is one flat, namely B-flat, and it calls the D a “re”, which implies that D is the supertonic. Hence the “re re fa fa” etc. implies that the piece is written in the C-mixolydian mode.

However, the first notes that are written are clearly a D-minor chord (D F A), which makes sense, because having one flat (B-flat) is indeed correct for D-minor. But then D is the tonic, so it should say “do do mi mi so so”, and not “re re fa fa la la”.

If I were your music teacher, I’d recommend another book

I agree with you. At the same time, it looks like @Gia just needs fun sheet music with solfege tacked on in C major, even if the song is in another key. Since that’s the case, I can’t offer any help. I tried Googling solfege songs to no avail, and I’ve not seen anything like it in my years in music school.

My recommendation to Gia is to write it yourself. Find a song that you might enjoy, and write under each note using this conversion chart: http://thepracticeroom.net/solfege.php

About 30 years ago, at school, we learned a bit of music and C (as I now know) was do, D was re etc. This I didn’t forget and is easy for me to read and for my fingers to go to the right keys without even looking, especially if I’ve played the song a few times or know the melody. ABC is new, and I don’t want to learn a new language.

If I were your music teacher, I’d recommend another book

Please don’t hate me for being a disapppointment.

I tried Googling solfege songs to no avail

Validation is a silver lining, it’s not just me, they’re not easy to find.

I showed this to my father (a professional orchestra musician), who explained to me that in some countries (notably France, Italy, Spain, etc), they actually use “do = C”, “re = D” etc. I didn’t know this, because, well, I learnt that there was a difference between the usage of the two things.

So it seems I’ll have to take back at least partially what I said above. You might therefore have more luck searching for your music in some Romance language!

Thank father V for saving me.

I like you all very much, and thank you for taking the time to reply, but I don’t want to learn anything more than I already know. The same as how I am with Go. I don’t want to learn the A, B, C system, or chords, or devote studying time.
Google gives me sheets with the results I mentioned above and these don’t work for me.

No wonder you are all good at what you do, but please don’t forget I’m a lowly form

Still, you’ll only handicap yourself for later. Bad habits are hard to forget.

One option would be to use the program Synthesia, which takes in a .midi file for each song and will show you the notes as they’re being played. You can also hook up your keyboard through midi to play along in program, but that’s not necessary. It has support to display the Do-Re-Mi labels as well. It’s pretty easy to start this way, especially since you don’t need to learn how to read sheet music. Depending on your goals, you’ll probably still want to learn to read sheet music so you don’t become completely dependent on Synthesia, but that’s up to you. It can be tried for free so I figured I’d throw it in as an option.

Music notation is very efficient, and way more versatile than writing the names of the notes themselves.

Borrowing from your previous example, that’s why I avoided romanization from the start and focused on Hangeul. But if someone just wants to sing “saranghe” along with Oppa

I’ve tried Synthesia years ago when I first decided to learn, even watched some videos on YT. Didn’t really work for me the way sheets do, but I might revisit it.

You can also hook up your keyboard

My keyboard is not that good