This is a humble game, lowest possible level, against the easiest AI.

I played 20 games and lost all, until this game, number 21, that went like this:

I know we learn more from our defeats than from our wins, but if you could kindle show me where to improve I’ll be glad.

Congrats on your first win! The first of many I hope.

Since you’re just starting, you should pay attention to the most basic tactic of all: cutting and connecting. As you probably know, stones have liberties. Stones without liberties are captured and removed from the board. Connected stones share liberties and strengthen one another. So staying connected is a big part of Go strategy. Cutting stones apart is often powerful for the same reason. This happened in the first 5 moves. Read this:

That’s the biggest issue that I noticed. And changing your thinking may take some time. So I’d start with that and focus on that one thing. Take chances to connect stones together, and take chances to safely cut enemy stones.

As you improve, you will start to notice when you might already be connected and don’t need an extra move. Examples of overly defensive moves are moves 16 and 24. Imagining that you played elsewhere and Black cut, a skillful player would be able to capture the cutting stone. But it’s ok to make those kinds of moves right now. I recommend focusing on connection and cutting.

Just curious. Are you the same Mark I’m watching right now here on this channel?

Yes, move 4. Maybe I shouldn’t type this late at night…

Hey there! Welcome to OGS

Congratulations on your very first win! A little over a year ago I was literally at the same place you are now. Today I am a confident 14K on the 9x9. I’ve put together some information specifically for newcomers. If you are interested, you can find that here.

I had intended to leave a few comments in the chat of your game, but found myself getting carried away. In retrospect I should have created an actual review. Sorry about that

. I hope you find it helpful

I am happy to see you are here and hope Go turns out to be as fun and rewarding for you as it has been in my own experience. Take care

I had intended to leave a few comments in the chat of your game, but found myself getting carried away. In retrospect I should have created an actual review. Sorry about that

. I hope you find it helpful

You made a terrific work on the chat. Well done! Thank you so much. I’ll reply here with some quotes and comments.

Nick Sibicky, a strong Go player, tournament winner, and popular Go Teacher, stated that victory on the 9x9 is often decided by Move 8. That at Dan level play, considering neither player makes a mistake from Move 9 and onwards, the framework established at the end of Move 8 will determine who will win the match.

I didn’t know that. I kind of suspected that the opening was very influential in the game following it, but now I realize that in a 9x9 game it is even more so.

However, a powerful (first) move for Black that White rarely considers is E5

I actually like it. It is called tengen, right? I learned about it here: https://youtu.be/JTmyQVsSTw4?t=62
But alas I’m White in this game (which is actually good, because it values my first victory even more).

Bellow an image of a variation you set up on the game and commented in the chat. What you did is amazing! Lots of information. I’m thankful for you to spend your time teaching me so much:

A common opening is to play two different Komoku points on turns 1 and 3 for Black or turns 2 and 4 for White. 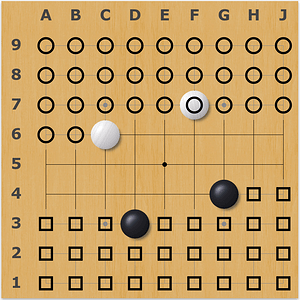 Turn 4: I think you are playing too close when you place a stone at D5. In the beginning of a 9x9 match you want to build a framework that you can fill in over the rest of the game.

So, I guess this is the problem for beginners: we don’t know the big picture. I can see only small “local fights”, and I am afraid to play stones apart from each other as they look isolated and weak. I don’t easily “see” how I can make a path from one to another. I think this will go away with practice.

So rather than D5, other strong options would be E6, F6, and G6. I would have personally chosen F6. I feel E6 is too close and G6 is too far. F6 is the sweet spot here.

This is just what I’m talking about. You “feel” E6 is too close and you “feel” G6 is too far. Consider that: my way of thinking is exactly like yours, but I “felt” (wrongly) that everything else except D5 was too far. It is just a matter of adjusting the “feeling” with practice.

I would do this because I am afraid that if I extend at E5, Black will wall me off and prevent me from growing downwards.

I see! Great advice. Sometimes in the previous games I lost, I found myself walled and boxed too easily.

Black cannot play A6 next without White immediately capturing that stone. So Black must still play A5 or choose to play elsewhere. Look for opportunities to do this at the edges. It is a very useful response.

Very interesting variant. An implication on H3 influences A7, the other side of the board! Hard for beginners to see the whole board like that.

This is why B6 is a poor choice. White must play at F5, G5, F6, or G6 in order to successfully defend from Black placing a stone at F5 or G5

To see “weaknesses” like that is hard because one need to see what happens next. It all depends on the ability to preview if a group will be dead or alive at the end of a series of moves. I have something to say about that, but I’ll save to the end of this post, regarding to the correct way to approach how a beginner should learn Go.

I show you this to give you an idea of the reasoning of why moves are made at certain points in a game.

Your comments and variations are perfect to show that! Thank you.

Turn 16: An alternate move to E7 is F3. Black must respond to keep you from claiming too much territory. From that point on the game follows a logical progression which has White win by 0.5 points.

The end is approaching, and the moves start to be “forcing”, following a logical progression. But even there, a beginner wouldn’t know exactly how to finish. That is why I find it annoying when the computer “resigns”. The computer shouldn’t resign at lower levels, since we probably “want” to see how the game ends, how the areas are completely covered. Even dead stones that is “presumably dead” should be made “explicitly dead”. Play until the last drop of blood, and learn by looking at real positions (not by imagining them).

Cool! Thanks for pointing that out. I was uncertain if I needed to play there or not. I guess a couple of points is always good.

Turn 24: C8 is completely unnecessary. White can easily defend that position if Black plays there.

Exactly what I’m talking about. It is really hard to see why a move is necessary or not without seen how to defend. When a good player sees something that it find “obvious” or “easy”, as a beginner nothing is like that. I’m struggling to learn Go because the youtube videos or lessons I read, from time to time, states that something is “easy” and don’t explain how or why. (Not your case here, you really showed all the variations!!)

I think that is because it is probably “boring” to great players to state something so trivial or to explain a maneuver that may take lots of moves but is “obvious”, spending precious time with basic stuff, when it is clear that the great joy of Go is to look at the good stuff, that is, how the big picture is affected.

Of course I will get there, but to get there and appreciate the art of looking to a full Go board, first I need to understand little tricks and small fights, and be able to also tell “that is easy to defend”, by knowing the maneuvers by heart.

In the image bellow you show how Black loses the fight!

Variation: Black Will Lose That Fight (White plays G4 instead of C8) 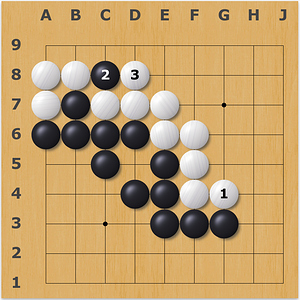 Turn 32: Without your successful invasion Black would have won this game by 3.5 points. Black made a mistake by responding at F2. Had it chosen D2, you would have immediately failed and the game would have been a Black victory.

In the end, that was how I won. Now I understand. I defended a small territory above. Not small enough to lose. Then I got luck with an invasion in a space that was possible for Black to defend. But that doesn’t take away my merit, after all we don’t play perfectly and the invasion was a nice experience to learn from.

If you’ve enjoyed this style of review, you can find a lot more information by referencing one of my teaching/study games, also linked in my newcomers guide.

I loved! Thank you. I recommend to all beginners like me here to check out your studies.

The correct way to approach how a beginner should learn Go.
(Wait for link to the post, as I’m new and I have restrictions to create 2 posts per day only)

Edited, the link is: The correct way to approach how a beginner should learn Go

Although our esteemed colleague mark5000 is too modest to mention it, I highly recommend his three tutorials for beginners, which you can find on the first page of the Puzzles tab.

I am so happy to hear that my review was so well received. I have never had someone come back with comments and expressing so much wonderful gratitude. You have put a smile on my face for the rest of the day. Thank you for your kind words