Hello all
there has been several issues recently where players did not follow the rules of sportsmanship and moderator had to step in, or hard feelings arose. I would like to remind everyone, that Go is a game with a very long tradition and certain codex of ethics should be followed.
I have taken the liberty of copying several rules from http://chapters.usgo.org/penngo that could inspire you on how to behave - especially if you are playing against a stronger player.

@anoek will soon add the support to displace the stones slightly off center and add mandatory microphone support so you could really scream at your opponent insted of just using the chat option.

P.S.: If you somehow hadn’t by now gathered that this is a satire please note that this is funny only in theory, not in real-life and there is really nothing to be gained by playing like a retard and annoying other players… and please don’t ban me

I think I’d rather have this in some other category than “Announcements”, though. Perhaps you know how often people take The Onion seriously even though everything on that page screams “satire” … we may have such people here, too (and they may be the same people who also play that way

BTW, I like to whistle the tune of “Twilight Zone” when playing my move

I think I’d rather have this in some other category than “Announcements”, though

Yeah I though as much and believe me that I had a long inner moral dispute. However the cheeky bastard side of me which thoutght it would be funnier like this won :-D. I apologize, feel free to move it elsewhere if you can.

Well, let’s see how it goes … maybe others, users as well as team members, have opinions on this, too

It’s not as if it were really problematic

Meanwhile, you may want to listen to this while pondering over your next move

Adam, I realize your posting is just trying to help using humor, but I do believe that newcomers to OGS who state that they are beginners should be shown a short list of required civil behavior expected here. This is not done currently. It might help make the site more enjoyable for everyone.

Great idea, @david265, what about compiling such a short list and posting it in https://forums.online-go.com/c/go-resources/beginners? That would be cool!

Adam, I realize your posting is just trying to help using humor

Oh, David, you misunderstand, I am not trying to help at all

But to repent, and to support a good idea and beginners, I will translate rules of ethics from one of my books so we have something to start from.

And if someone will eventually post it for beginners, I think it would be prudent to first discuss those rules here so we would agree upfront and everyone has a say before making it “official” 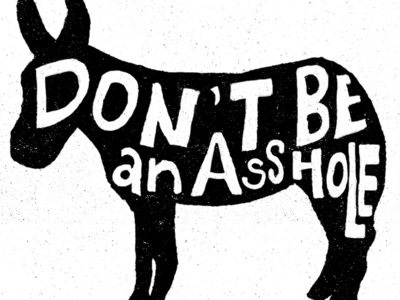 Nice, and if I may expand …

- If you are losing by too big a margin, it is more polite to resign, rather than trying many trick moves and unecesarily prolonging the unevitable. There is no enjoyment in playing such a game for either of the players.

Well, yes, sort of … this assumes that people realize that they are losing “by too big a margin”. Please be nice to people, they may NOT realize that it is so.

And “Asshöle” is quite relative, as in: black box. Different people think different things are bad. So I’d prefer to leave it at your first (expanded

This suggestions makes me inclined to be against such a list, unless it comes with certain qualifiers.

Very well, I concede on almost all of your points and especially apologize on my second point that was some seriously wrong articulation on my part. So how about:

But to be completely honest (for once) do you really feel that stating such “rules” is necesarry? It just seems to me that all of those are quite obvious/natural, unless you are the proverbial backside of a donkey (maybe apart from nr. 2). and as @Wulfenia quite accurately indicated

The others won’t change because of some text.

right? So I will just post my original rules for the begginers as well and let’s be done with it

What bothers me is the “It is polite to resign” - rule

“It is okay to resign, you dont have to play to the end.” or
"It is not unpolite when you resign"
would maybe implement a better behavoir.

I think “Its polite…” implies to often a quitting-behavoir what feels more frustrating then get treated polite.

I would love to see a rule that states, that abandoning a correspondence game for it to timeout is extremely unpolite as being extremly frustrating for the other side (at least me). This goes especially for games that have just been accepted, and have 1 or 2 moves. Abandoning longer games is also annoying as it ruins the rank system. I never lost by timeout but won like 30% of my games “thanks” to it.

Something that beginners also do a lot is to accept a correspondence game just to quit after joining, sometimes leaving a joyful comment like “47h !? seriously dude?”.

There should be a rule stating - start the game only when you know you want to play it, check time and handicap settings before starting!

I want add one (I think important) “rule” for more politness

The winnner shows his respect to his opponent with a “thank you for the game”.

This “rule” is more important then one could think.
It is a sozial/psychological thing what shows the weaker person respect on an interhuman level (and helps him/her to deal with his/her emotions).

(something like this, should be a basic behavoir for everyone in ervery situation and would make the world to a better place)

I like your rules, and believe that they are a good start, and worthy of posting as given and adding to over time. However, I would eliminate your final rule, “Don’t be an asshole”. This will be viewed by many as uncivil and insulting, even if you do not yourself interpret the statement this way.

I definitely agree with you and others here that beginners need an introduction to greeting their opponent (when language use allows) and other fundamental guidelines for acceptable textual and other conduct during go games.

But to be completely honest (for once) do you really feel that stating such “rules” is necesarry? It just seems to me that all of those are quite obvious/natural

I have played many beginners in my off and on amateur go ‘career’ since I first learned from Bruce Wilcox in 1971. My experience is quite different from yours. I believe that almost every beginner would benefit from seeing a list of guidelines or suggestions for literate, or at least polite, go playing behavior before they are allowed to start playing for the first time.

This is very important, I missed this in my reply.

There are indeed quite a few people who have issues with typing. Also, some players may have been chatbanned for some or other reasons …

Therefore, if your opponent does not greet you or thank you for the game, don’t jump to conclusions!

I will add that I have played on many servers where you rarely get any comments in the chat, or similar feature.

I try to follow the lead of the other player. I like to talk, so I can get going at times. Others may not enjoy that as much.

I believe that almost every beginner would benefit from seeing a list of guidelines or suggestions for literate, or at least polite, go playing behavior before they are allowed to start playing for the first time.

Well, I kinda like that. Only not quite sure how it could and should be implemented …

I have been in many mailing lists since 1991, owning one myself (a German Mac-/Apple-related mailing list), and it is usual (or used to be usual?) that newly registered receive a welcoming mail that includes some text or URLs about netiquette, which I like a LOT.

I see a repeated assumption that people actually read these things. I think that is even less true than in 1991 because we have all been trained to ignore the legalese you have to click through to install updates of one of hundreds of apps.

Well, ja, you may be right … I am a dinosaur from times when people actually read ReadMe files …