New players at OGS and how strong they are

This histogram shows the ratings of new players after they finished their 1st, 2nd, 5th, and 15th game on OGS. It reaches 1 year back. 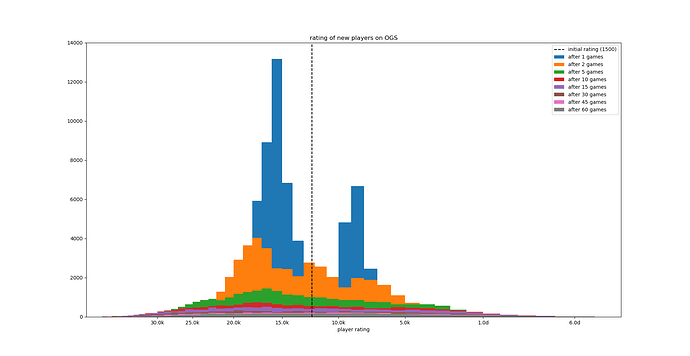 When only looking at September, the mean and median are lower.
It looks like we get more unexperienced players lately. 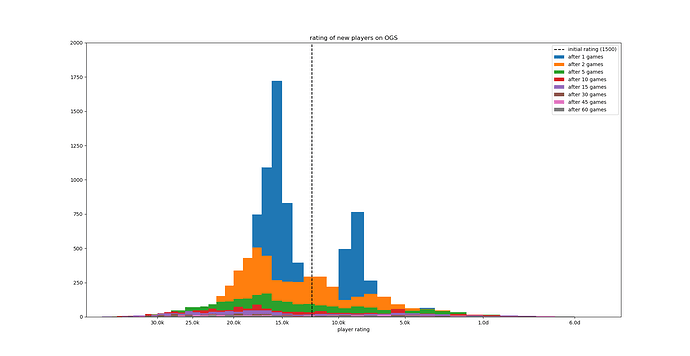 Its interesting that even by 5 games, the spread is very flat, which means that people joining up are very well spread, not biased in the direction of beginners.

The two peaks after 1 game makes sense because one person wins and the other loses, so the higher peak is those people who won their first game.

Rating increases toward the right and the leftmost blue peak is higher than the one to the right, so there are more people who lose their initial game. This spread is pretty much what I imagined it would be. I’m also a little happy to see a trimodal distribution for the first time.

The two peaks after 1 game makes sense because one person wins and the other loses, so the higher peak is those people who won their first game.

The left peak are player who lost their first game, the right player which won.

PS: It just came to my mind. This includes every ranked win of the first game. Including resignations because opponent got bored or realized they are playing against an inexperienced player.

would you be able to make separate distribution graphs for the ‘after 15 games’ category? That would be greatly informative especially if you could include percentile breakdown.

Player distribution after their first 15 games 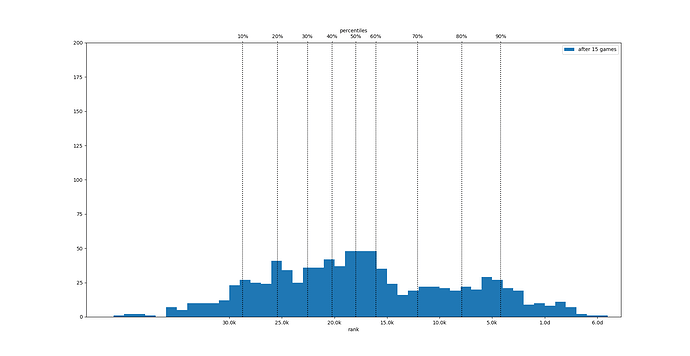 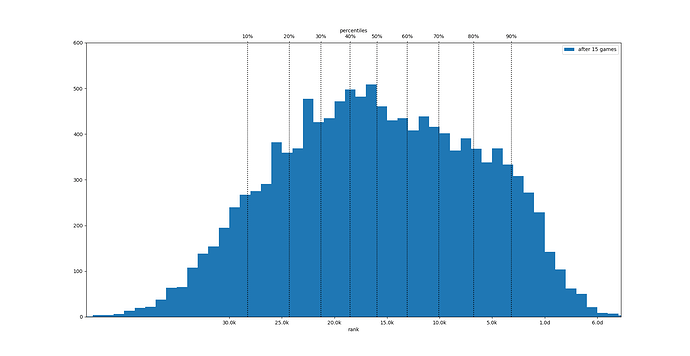 So cool, thank you!!

That statistic is amazing, but it includes a distorting factor that is hard to quantify. I have seen several cases where it seemed that someone had created two accounts and was using one to rank up the other. In other words, playing against themselves and using one account as the losing account.

I didn’t filter for sandbaggers or heliumballooners

What about players who quit after few games? Did you filter them? How many players are in each group?

Surely compared to the total number of players and games, the number doing that nonsense is in the noise?

Since we are in this wishing mode… Can I ask for the distribution of final ranks, for players who never got to their 15th game?

I.e. who are the players who could have stayed with us, but didn’t.

What about players who quit after few games? Did you filter them? How many players are in each group?

Basically I filter nothing. If the rating history contains at least 1 game, they go in the 1 game group, if it contains 2 games they go in the 2 games group as well, and so on.
I added the total number of player to the table in the first post.

Can I ask for the distribution of final ranks, for players who never got to their 15th game?

I.e. who are the players who could have stayed with us, but didn’t.

I won’t do this in the near future.
There are some problems to that:

I just don’t have the time to do that right now.

Edit: This would probably don’t show anything interesting. If you take a look at the table in the initial post, you can see that while the number of players which have played at least 15 games is a fifth of all players with at least 1 game. The percentage of players weaker than initial rating stays almost the same (≈70% → ≈64%).

If my estimation is correct 19% of the weaker players and 24% of the stronger players stayed for 15 games.

I took a look on how long it takes the average player to finish 15 games if they are new on OGS:

The histogram for September hasn’t settled yet completely.

I made another plot for fans of plots which are hard to read: 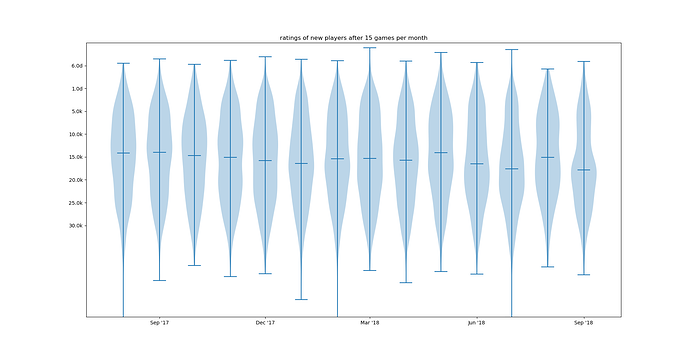 I added the total number of player to the table in the first post.

Thank you very much.

So we can infer from your data that, out of 63025 new accounts on OGS:

In other words: the visible part of each colour in your first histogram is the number of player that didn’t get to the successive group.

If we assume that 60 games are enough to think that a player is willing to stay undefinitely, those players are only 7,4% of new subscribers.
Also about 60% of new players won’t get to play 5 ranked games.
It’s quite impressive, isn’t it?

Could we paraphrase, and say

If you said that to me, I would have thought “well, pretty good!”