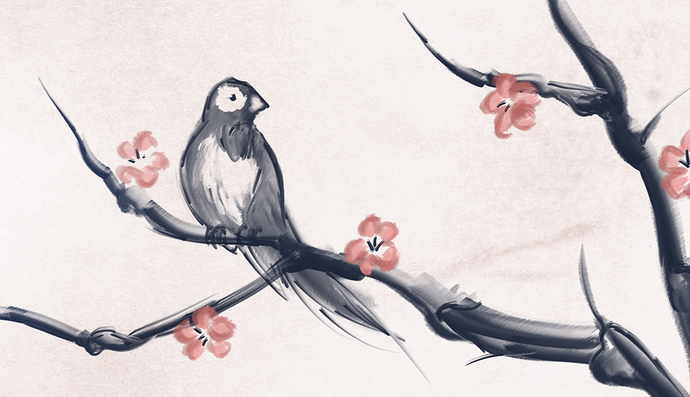 Long, long ago, in the time-hazy era called by the Ancients “2017”, a thread was made called “Christmas Go Haiku Challenge”. Many mightily-skilled poets of legend gathered there, and promptly left after seeing we’d turned up. Still, much fun was had, and a fine collection of rustic odes to the beautiful game were penned. With that in mind, it’s been in my brain to start a new challenge: Go poetry for New Year! I’m going to write a haiku about Go for every day of this month, and you’re all invited to join me. But this time it’s different: I’m encouraging you to write a tanka as well. Whereas a haiku has a syllable pattern of 5-7-5, the tanka are longer and go 5-7-5-7-7. With that in mind, let’s have a go…

A Message from Go, on her Birthday

Four thousand you say?
Seems like only yesterday
I taught him to play:
Shusaku. Soon went away…
Still, look forward to today!

And From the World Champion Ke Jie

Weiqi is like a
Whirlpool dragging me deeper
Down into its heart.

Forefinger below,
Middlefinger above, they hold
Endless potential.

Great leadership
Is what they ascribe to me.
But nothing will ever
Comfort the gorge in my heart
Emerged from your sacrifice.

A single eye tears: It is unable to save a dying dragon.

Perhaps a tanka sometime in the future

I feel I more or less emptied out my brain on the Christmas Go Haiku Challenge, but maybe I can crank out a few more here.

Dragons don’t breath flame,
The magic sword is rusty;
Tombstone’s just a name,
Like taisha or nadare:
Go is more than what you see.

The history of Go:
No-one ever really lost
(except for the clams.)

It’s Been a While

It’s been a while
Since I last played a Go game:
Reading is fuzzy,
Fluffy like a dust bunny.
How do the stones move again?

An old joseki:
John Fairbairn says it was found
In a pyramid.

The board’s four sides are
Four gates to a mandala
Of intertwined paths
Lined with black and white pebbles.
Let’s explore it together.

Brutalist Go set:
The board is made of concrete
And the stones are square.

Fate will not be moved.
Three hundred sixty-one points
Become null and void.
Seemingly infinite chance,
And again it comes to this.

A clump’s called “dumpling”
But it also looks like snow
Or a floating cloud,
Or a pile of blossoms
Fallen on the board.

What to Work On When

I felt in love with my sensei moves.
I just played that flat move with my sticky fingers.

Poem From a Kaya Tree

Once an old kaya,
Now a thick goban with legs
In the NHK.
But my games still have branches
For the players to climb up.

Brits play underground:
Hidden dwarves who only leave
To get a curry.

Read all about it,
Two great legends fight it out –
Biggest ever match!

Go is Change, Playing is Opinion

I play from nature
Until I shall fall and rest
Upon the Go board
Which has supplied me with peace
And I use for many games.

Round Robin or
The Happy Hour

The clock says begin.
Clackity-clack fills the room.
We raise another.

Seven stones no less,
And it might have ruled the world.
There’s your influence.
Fighting spirit somehow fled,
The great wall so beguiled me.

Woops, looks like I missed a day. Going to need to make two days’ worth now…

Final Musing of a Dictator for Life

“Funny, it’s just like
That pleb’s game latrunculi
(Wisely called “brigands”) –
See how many are needed
To kill but a single one!”

That one’s going to take a bit of explaining, so bear with me. The speaker is Julius Caesar, its a mental monologue, and he’s referencing a real Roman game as he’s assassinated by the gang of senators. Latrunculi was similar in some aspects of its equipment and rules to Go but was probably more like the modern Japanese game hasami shogi.

When I Played a Pro

“Choose how many stones,”
he said. I took the board and
Covered it in sand.

The stone vorpal-glowed,
Held by the spined insectid,
Humming patiently.
The holo-pundits looked on
(Still dressed for the '70s.)

The Birth of European Go

Splitting with the Pope,
Henry made new rules, claiming
Himself England’s Meijin.

Samurai soldiers,
It is said, worked off tension
With the game of go.
Bloodless war welcome relief
From carnage, from mounting grief.

That’s your best yet.

Dear Go Players:
If you like LISP and beards
Then choose GnuGo.

In the City of the Blind

My group has no eyes
So there’s a lot of bad aj.
Nothing works: atar
nor nob. Not even a sek…
Can’t make life without any —

Thanks. I think I’m more of a tanka man. It seems you can stay on point, whereas haiku requires an intuitive leap. ( I wonder if I’ve actually written one).