Hi,
I posted this GitHub report but no answer:

Newcomers (with rank "?") can play game despite maximum ranking 19k

I am user dhpmrou Describe the bug I create games specifying minimum (worse) rank to be my own rank+3, so typically 19k or...

Describe the bug
I create games specifying minimum (worse) rank to be my own rank+3, so typically 19k or 20k.
I have seen several times (as one can see from my games), players entering my game with rank “?”. Some of them are reasonably good, but some are really a waste of time.

To Reproduce
Steps to reproduce the behavior:
I guess one would have to create a dummy account Bob (with rank “?”), create a game from account Alice with a well defined rank, limiting the Rank to 19k, and check that Bob is able to Enter Alice’s game.

Expected behavior
I would expect newcomers to have the equivalent of rank 25k or whatever, and not be able to enter game where the minimum rank is <24k.

Not bug. Newcomer may be new on this site, but very experienced in Go. To have no discrimination on new users, you have no option to filter them.

Existence of such option would be good for experienced OGS users, but there will be less new users, because they will not like that they can’t accept anything.

Well this is a choice, but frankly this causes bad experience. Since I started 5 weeks ago, I ave played a dozen ? players, just one was extremely good, a few reasonable, and maybe half a waste of time. I’m always nice but if you have someone playing very slowly, continuing to play in a hopeless way this is not a good experience. And I guess everyone is sharing this bad experience. Also as soon as the new player wins a game he is 25k and he cannot anymore play players conditioning the rank of their adversary, so…
While a very good player would, OK waste his time a few games, but he will climb the ladder very fast to reach his true rank. Or he can invite or be invited by a friend who is already there.

For the most part, this has been only an occasional problem, and one we’ve all been willing to wear.

Having a dozen [?] games in a short time would be really rare.

However, I suspect we may be seeing an increase in the this experience due to the corona-virus burst of new members on the site who are exploring Go with nothing else to do…

… food for thought there for sure.

There’s no way around some pain with new players and rating uncertainty, that’s just an unfortunate truth about rating algorithms. I played a provisional rank game a bit ago against someone who probably is around 5k. I’m 10k, for reference. Forcing this player to start around 25k games would be a bad experience as well, in which newer players are demolished, and the strong provisional player must wade through these games, inadvertently sandbagging.

I should have said I’m playing only 9x9 short games, so can play 10 games in a row in one evening. But actually the waste of time is even worse fo 13x13 or 19x19 I imagine.
Actually I wonder if this very fact explain a phenomenon I’ve observed : games that are proposed (in particular short games) are matched within a few seconds, meaning there are much more players watching the list of offered games, than players creating their own games.
Why is that ? Is this not because people prefer to chose their opponent, while when creating a game bracketing the rank of the opponent there is a risk to have a complete beginner ?
(sorry to be bitching, I should have started by writing ogs is the best thing that has happened to me in Covid time, the whole system is really amazing)

there would be a simple solution to defuse this situation:

I’m 15k (well, today), games with 18k are enjoyable (to me), I might even lose some. The absolute beginners I’m talking about hardly know what an eye is, even less the necessity of two eyes, will atari with one of their stone in atari (many times), think they should not stop as long as there is some room on the board to place their stones, etc…
A flux of new (good or bad) players entering at low rank would destabilize the pyramid only if this flux is significant wrt people that are there, does not seem the case to me but you have the data.
Note that all I’m saying is that as a player creating games, I’d like to avoid these newcomers.
David

Ranks of new accounts (after March 25th) gray are still provisional, black got a stable rating. The gray spikes are player with 1 or 2 games. 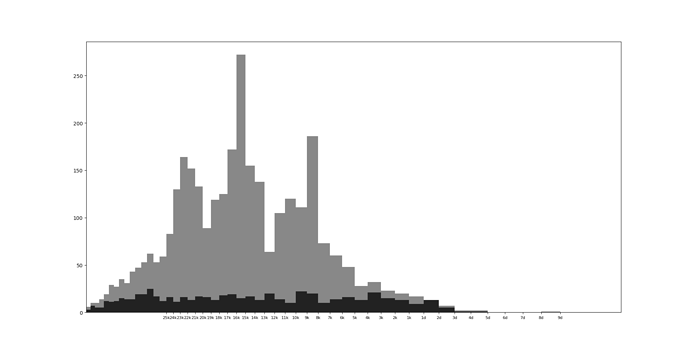 Here’s my take: We can’t ask new users questions and quizzes about things, it’s not beginner friendly. It’s great for folks who already know how to play the game, but one of our primary goals has been to grow the community, and asking brand new players questions about things they don’t know about yet is not a very welcoming thing to do. Also allowing people to set their own rank causes a bunch of problems (as mentioned in a previous post, we used to do this, it caused a lot of problems with sand…

but the starting rank is provisional only, so it shouldn’t really make a difference, or am i overlooking something?

Also I can’t see the problem if beginners get a ranking which is “more accurate” than the default one.

Due to the uncertainty in their rank, newcomers are already treated as about 19k for the purpose of matchmaking, or supposed to be.

So if there is a game where the ranking band was set above this and a newcomer joined, we should find out why.

To have no discrimination on new users, you have no option to filter them.

The lack of this option does not prevent discrimination against new users. One “work-around”, which I guess would be frowned upon by some, would be to immediately cancel the game if the opponent that turns up is a new user with the ? in their rank. Further, if one winds up having the same user turn up again and again, I guess the block user feature could be used.

Thus, people can still filter out new users, but they just have to do so manually and in a more disruptive manner.

To be clear, I’m not condoning this behavior, but just pointing out that it is still possible. I suppose the argument against having the option would be that it might send an implicit signal in support of avoiding games against new users.

One way this issue is mitigated is through the rating system being not zero-sum. For a new player with a provisional rating (high uncertainty/deviation), their rating is adjusted more and their opponent’s is adjusted less. This allows the new player’s rating to be adjusted quicker, while reducing the impact on any opponents that they face.

Giving new players the average rating is less important than giving them a large ratings deviation. In principle, since the system is not zero-sum, the average and median rating can drift (hopefully, while tracking an actual increase or decline in the skill of the player base).

Since the actual skill-level of the player base can drift over time (maybe with surges of new players, or the existing players becoming generally stronger over time), it is natural for the average/median to drift. It could actually be detrimental to use a purely zero-sum rating system, since then rating inflation/deflation have to inevitably happen as the actual skill-level of the player based shifts.

What you’ve said sounds reasonable - I was really just quoting what I have been told, which is that for rating system stability new users have to all have the same rank, about 13k and high uncertainty.

This has in fact been discussed to death before, where that conclusion was very firmly stated - maybe one of our forum necromancers could dig that thread back up for our reference now.

It is also true that you are allowed to cancel games if you discover something unacceptable about your opponent. This only becomes an issue if you do it too often.

It remains the case that newcomers should be 19k for matchmaking purposes, so higher ranked players should be able to avoid them, as far as I know. (This was the “humble rank” solution).

If that isn’t working, we need some concrete evidence to track down what is going on.

A few notes about the rating system.

Here is a thread that was the culmination of a lot of discussion last time this came up.

As you will see there, I initially thought that the 1500 pt (13k) starting rank was giving us the bad experience reported here, and opened that thread to discuss it.

What I learned, and you can read in that thread, is that the 1500pt starting rank is chosen for the stability of the ranking system.

I don’t understand why that is - I have taken it on face value because experts say it is so, and you can read about it in that thead.

At the end of that thread there was a proposal for “humble rank” to solve the matchmaking problem that this starting rank causes.

This is supposed to ensure that new players are treated as 19k for matchmaking purposes.

Hah - flovo pointed out to me that it’s a previously acknowledged bug, eh @anoek …

I think, the graphic that @flovo posted shows how well the rating system works even for new players who have only played one or two games. This graphic alone seems to be a quite good argument against having different starting ranks.