No sounds in Mozilla

suddenly I dont hear any sound with Mozilla (on OGS website only)
other websites like yt work, other browser like chrome works with OGS as usual…

Anybody idea? Am completely clueless here …

(And yes I do play with chrome in the meantime

I have no problems with mozzilla myself.

The usual suspects might be any new extensions? Are you sure you did not disable sound by chance? Be it the right game panel slider, or the tab itself…

If you wanna try some troubleshooting go to your settings https://online-go.com/user/settings > sound settings click F12 to open dev tools and go to console. Click some of the test play buttons and see if something new comes up

Or if there is some error instead… Or nothing, which would be least usefull

Hi Adam, being a long term sw developer, no the usual suspects are not guilty in this case.

as i have absolutely NO experience with web development; i m just a “normal” user here
i press F12 to see the dev tools

when I press the buttons., I hear nth at all; where should I see the mentioned text?!
I go to another tab ; evry other website works; the ogs tab is of course not muted, mozilla is set back, new installed …

To open javascript console you either F12 (Fn+F12 if you have function keys enabled) and select the console tab, or I believe ctr+shift+k should get you there directly.

You should see something like this (pardon the different language, I am too lazy to switch it):

Any big problems will be highlighted red, warnings are yellow. But it also completely possible there will be nothing of interest 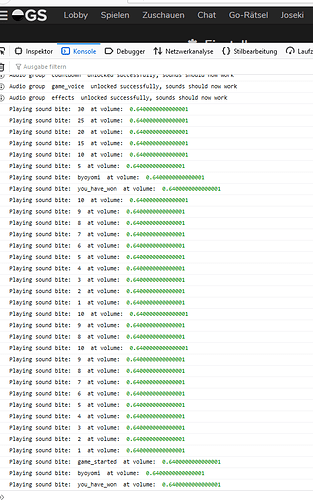 Not sure if this is relevant but playing on safari on ipad, I occasionally lose sound but refreshing fixes it.

I have the same problem in Mozilla. Actually, the sounds play, but the volume is extremely low so you barely hear it. I figured it was a problem with their whatever and switched to Chromium (on Linux) temporarily / permanently.

Seems to work on some versions (?) of Firefox on Windows (?) though. So it could be a Pulseaudio issue, because Firefox always uses Pulseaudio on Linux, unlike Chromium which may use ALSA.

I play exclusively on phone, using Firefox - everything works fine, except for the byo-yomi countdown.

I’ll give it a try on Chrome, see if the problem persists. ^^

Hi folks, I’m playing exclusively on phone at the moment. I use the submit button to avoid clickos - I noticed that the audio byo-yomi countdown gets cut off as soon as I place the “virtual” move on the board, before submitting it. Any idea why that is?

There is already another thread (have to find it) describing such issues. I also have erratic sound and I believe that either the used sound library or its usage has a race condition. I had a brief look at the code and it seemed to me like something is tricky there, and someone had to try hard to get it to work, e. g. that volume seems to be set again and again at each invocation, and of course the debug output.

Igloo linked this in the other thread I made:

At least for the cut byo-yomi countdown it seems to be a known issue.

I’ve just upgraded my web browser from Firefox 68.10 to 78.11 and all sounds on OGS disappeared.

Sounds on several other websites I’ve tried are fine . Launching a browser in the safe mode (no extensions) doesn’t help.

[edit 1: found 2 other websites where the sound stopped working too.]
[edit 2: changing sound drivers/system solved the problem; apparently different sound can be playing using different systems or something.]

Unlike for the original reporter, however, the symptoms are slightly different. On the OGS sound setting page, whenever I click the sound testing button:

Any troubleshooting tips are appreciated.