sometimes I want to see how many kibitzers are watching a game, and I want to be able to sort the current games by rank, by time played or remaining time, by size …

Yep re the rest of the sorting options, they’re not forgotten, just have to figure out how to do that efficiently on the backend

There’s a couple technical issues to solve to make that happen, we’ll have to think on them a bit when we get there. We’re planning on revamping that page in the not too distant future, so we’ll keep it in mind when we do so

Sorting live matches by rank or number of observers

Definitely some good ideas, and it’s something we plan on redoing pretty soon. That list of games is a little heavy to calculate at the moment so we are looking at better ways to do that.

Sorting live matches by rank or number of observers

This is discussion about improving the game list view, specifically the Watch page, but also the Home page. (See issue #151). @Lemurek’s game list looks like this: [image] My game list looks like this: [image] (Yes, there’s a lot of white space on my page. The lower half is completely blank.) I feel the issues can be categorized in this way: What information should be displayed? How should the information be organized on the page? What information to display: The current page displays …

The OGS kibitz situation is awful compared to KGS, for a number of simple design reasons. Visibility - When you log on (KGS), you immediately see the highest ranked players’ active games. OGS shows you… a large page with your own games. If you’re not playing any games, it shows you a lot of blank space. Overview - If you want to observe a game on KGS, you just pick from the names, ranks, board sizes, move # or observer count. Notice: observer count. If you want to chat, this game with 20 peopl…

It seems like many people on OGS have requested these features since at least 2014, including almost all the current moderator team. In 2014 it was stated above that server back-end optimization was required. It seems possible that some of this was done, as the git blame for GameList.tsx seems to have all been written between then and now.

I was wondering if @anoek (or @matburt) could please confirm whether sufficient back-end optimisation has been performed such that this could be revisited. In this thread @flovo seems to have already done some digging into this project also and did not seem to have much success. If possible I would like to look into implementing not only sort by rank / observers / bot / board size / etc. but also the ability to prioritise friends on the observe games page.

However, beginning work on such a grandiose project would be silly if the back-end cannot yet support such features and if there are no immediate plans for that to change, despite matburt’s assurances above from both 2014 and 2015 that it was coming #Soon.TM

I fully understand that priorities change and that many wonderful things have been added over the last 5 years, so this is in no way a criticism but rather an attempt to check in on the current state of the back end to determine whether beginning front end work on this project to resolve Issue 702 has merit or if it is a fool’s errand

Borrowed from Got Stats?, I was thinking a collapsible filter at the top of the page might work well (assuming the project is viable)

Though, thinking about it over the last day or so, I’ve been wondering how much of a market there is to kibitz Correspondence games? Maybe we could totally remove Corr from the page, which would drastically reduce server load for variable searching.

Is there some reason to look for Correspondence games from the Observe Games page that I have overlooked?

Blast I forgot it was still the weekend in America, sorry anoek I’ll poke you in 11 hours when it’s Monday morning for you.

Maybe we could totally remove Corr from the page

Totally makes sense to me (and I play correspondence exclusively! Maybe I just don’t want ppl to watch my sh!tty play? But no, I don’t think so

I used to exclusively play corr back in the day as well, and still cannot think of a single reason why anyone would want to browse “ongoing” games.

The ability to mark games to permanently follow is another matter, but that’s totally out of scope for this topic.

One reason: top 9d+ games are there. If you look at top of the top correspondence games there, they’re being commented on (and who knows how many people looked at them without commenting).

I don’t think there’s other easy way to find top 9d+ games? So now you know one reason.

top 9d+ games are there

I’m sure we can find some middle ground between not being able to see when Sadaharu has interesting new games and having to search through all 18,000 games when you just want to filter live games

Maybe we can just leave Corr how it currently works and only implement the search filters on the live games side?

For live games, my observation is we don’t need a bunch of filters, on KGS at least, people pretty much just pick one of the top few games on the server and hop on to kibitz about it. Because of that, it’s been our long time intention to do a sort of “OGS TV” system, borrowing from “Lichess TV” concept, which is basically a special page that always has a top rated live/blitz game for kibitzing on, when it concludes, it automatically loads up the next one. With this same system we also want to add embedded twitch.tv support to make it easy for folks’ to see ongoing lectures or other go related twitch tv content and the like.

For correspondence games, some more filtering would be nice, but each search dimension is at least another index, so basically we just need to par that down to what people actually want to search by, not just add everything.

What I definitely want to do is add a “favorite player” system so you can easily see a list of games by all of your favorite players, both correspondence and live. But that’s somewhat of a different system all together.

basically we just need to par that down to what people actually want to search by, not just add everything

If that’s the case, the number one request I’ve seen is

it’s been our long time intention to do a sort of “OGS TV” system, borrowing from “Lichess TV” concept, which is basically a special page that always has a top rated live/blitz game for kibitzing on, when it concludes, it automatically loads up the next one.

Such a system would definitely need built into it not just player ranks but whether a game (or demo board / review) already has a high number of viewers and prioritise that.

Also, you didn’t really answer the question as to whether there was sufficient back end development / optimisation to begin work on this on the front end.

Nope, gotta add new indices and expand the api to use them at the very least

Good to know. Thanks boss. For now I guess I’ll settle for poking it back near the top of your precariously balanced to-do list

Can we please reopen Observe Games page overhaul ? The discussion has been closed due to inactivity, but none of the features have been implemented.

There we went … and re-opened it

none of the features have been implemented

Since ratings are still being analysed and optimised, no work should be expected on this feature in the near future

That’s fine by me, I just don’t want it to get lost down the memory hole.

So… I guess this is done now!

I am using this feature and I am very thankful that this has been implemented, since I felt the need for it for longtime.
So, thanks a lot to everyone that helped reaching this goal.

Now that we have it, we also have something to complain about, so it’s double feature!

Well, I find confusing that some filters could hide the whole list.
There’s a logical hierarchy but it isn’t clear visually. So, as an example, you can uncheck both “ranked” and “unranked” and nothing remains. 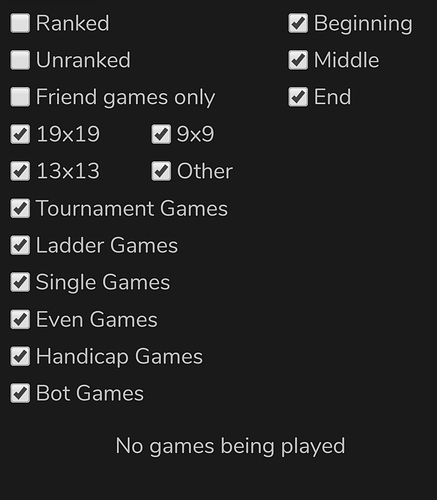 @BHydden posted an image in a previous message where these buttons were grouped. I don’t know if it’s only for bigger screens, or if it was a mock up or what, but on my mobile everything is glued together.
Having some space would help understanding the logic, but I think that it would be even better if some button was replaced by a switch: ranked/ unranked, just like the winrate/points in AI analysis.
This wouldn’t allow to see all of them though.

Some other options is confusing: selecting live games and ladder games leaves nothing in the list. That shouldn’t even be an option.

“Friend games only” is the one and only button that must be unchecked in order to see all games.

And eventually, what does even “single games” mean?