When you say you have 1800 new players a week, do you really honestly mean that? How do you assess that around two thirds of them have never played Go before? I can imagine that you’d get 1800 new registrations a week, but, 1800 new players would indicate a massive surge in the global Go playing population that was previously unknown to the worldwide community.

When you say you have 1800 new players a week, do you really honestly mean that? How do you assess that around two thirds of them have never played Go before? I can imagine that you’d get 1800 new registrations a week, but, 1800 new players would indicate a massive surge in the global Go playing population that was previously unknown to the worldwide community.

We do. When I ran those numbers I looked at the number of new accounts created, removed duplicates, and it came out to be about 1800 on average. From those accounts we looked at how many set their rank to ‘Never played before’ and that’s where the 1200 came from. Obviously people can lie, and some experienced players like to work their way up, but generally we feel like it’s probably a fairly reasonable ballpark figure.

This is the reason matburt and I started this project. When we were interested in getting into the game we almost didn’t because there wasn’t anywhere to play the game that we felt didn’t kinda suck in some way or another. So one of our biggest goals for OGS is to provide a place that is very approachable and removes all the barriers to entry for new players. We want it so when someone hears about the game from a movie, book, friend, or wherever, the first thing that pops up on google is a place that makes it really easy to learn the game and start playing. There’s a lot we still want to do to make it even easier and better, but this is where the majority of our growth comes from, getting new players into the game.

As for a massive surge in the global go playing population and worldwide community, two notes: 1) 1200 new users is still a drop in the bucket for the worldwide community, I wouldn’t be surprised if Asia has more daily churn in players than the entire western community. (But we’re growing!

) - and 2) while we introduce the game to a lot of new players, it doesn’t mean that they all stick around and become big participants in the larger go community, especially not right away. Last time we ran the numbers (which was maybe 2 years ago now), our sticky rate was about 8-10 % if i recall correctly, meaning that of say 1200 users, we could expect maybe 100-120 to still be around in a month… and then you have some natural churn from the larger pool of established users as players come and go, so at some point you reach a population equilibrium if your sign up rate doesn’t continuously increase and your sticky rate stays the same.

Sorry for the long response there, but in summary, yes those numbers are real, and we’re only looking to make them even bigger

Interesting, how are you defining a duplicate? If it is only on an email basis then experience tells me to be deeply suspicious about the accuracy. Is there any breakdown available on geographical regions, or even email domains?

Interesting, how are you defining a duplicate?

Is there any breakdown available on geographical regions, or even email domains?

I haven’t looked at those numbers for new users specifically, but I’d imagine they are roughly in line with our site stats overall, which in summary is 35% from the US, 8% from the rest of the America’s, 34% from Europe, 6% from Russia, 15% from Asia, and 2% from Oceania+Africa. I’ve never looked at email domain distribution.

Interesting, but it still adds up to saying that a number equivalent to the entire AGA membership joins up every week, which seems suspect.

Every user has unique id on OGS. Like 115 or 115115 if you suspect the numbers you can figure out the current number OGS is at now, save it and check where it has progressed in a week.

Simply looking at the number of new accounts registered doesn’t say anything useful.

All of the information necessary to do your own analysis @NeonLights. If you are suspicious of our data, please feel free to gather and analyze your own. We all look forward to your results. We’re always anxious to get more useful data.

Maybe this is way off topic for some people, but I’m sure you can see why I might be suspicious of your data. Using your own figures, in just 10 weeks the euro/russian section of unique new players coming to OGS is larger than the active population of the EGD. That’s pretty fast, isn’t it? Especially when the EGD population is (sadly) declining. For me the claim smacks of [605 million]

(http://streathambrixtonchess.blogspot.com.es/2006/10/605-million-index.html). Sure though, of course I’ll go ahead and analyse the data in my lunch breaks.

I am looking forward to the results.

Are you really, or did you just write that as a way to say be quiet?

I always look forward to people putting up. It indicates that you care enough about the service we provide to go through the effort of correcting our dataset,.

Not sure why you find it hard to believe that our numbers are higher than the EGF / AGA, those organizations cater to a subset of the established community - the part that likes playing games in person and doing things like taking trips to go to tournament events in person, and/or love the game so much that they are willing to donate to those organizations and get little in return other than the satisfaction that their donation will be used to further promote the game and be of some benefit to the Go community at large.

Compare that to OGS where we cater to everyone from those that have a fleeting interest or curiosity about the game all the way up to enthusiasts, and there is no barrier to entry to make an account on OGS - it takes less than 5 seconds to create an account here. It should be quite intuitive that our numbers are going to be quite a bit larger than theirs.

[quote=“NeonLights, post:9, topic:6102”]
in just 10 weeks the euro/russian section of unique new players coming to OGS is larger than the active population of the EGD[/quote]
Unsurprising, IMHO.

If then you take into account that the number of active (!) players is a LOT higher than the number of those who visit tournaments (etc.) … also, for example, there are perhaps a little over 2.000 members in the German Go Association (DGoB) while estimates are that there are over 20K active players in Germany.

Of course, that figure is only a percentage of the playing population. In order to support the figures you claim, how small would it have to be? You can look at the completely unique player who has played before figure, you can then say that in 30 weeks you replicate the active EGD population. Does that seem likely? Not at all sure that it does in a server of this age. Look at DE in http://www.europeangodatabase.eu/EGD/Stats_Country.php - since 2005 the population is in decline. It then makes your figure very interesting - to say that the completely unique player registration who have never played before is so high. I suppose that it doesn’t have to be impossible, it just doesn’t seem particularly plausible given the statistics and observational evidence I’ve access to. What seems more plausible is that the ability to say that they are unique is weak, perhaps as weak as to say that those claiming they’ve never played before are genuine. How popular is sandbagging on OGS?

Whelp I’ve given you all the information I have, what you make of it is up to you.

Look at DE in http://www.europeangodatabase.eu/EGD/Stats_Country.php - since 2005 the population is in decline.

Note this, taken from http://www.europeangodatabase.eu/EGD/EGF_rating_system.php “If a player has not participated at any considered tournament for some time (this period is set to 2 years for dan players, 12 months for 1-10 kyu, and 6 months for 11-20 kyu; the actual year/month is not counted), he/she drops out from the current rating list.”

So, EGF only has data from those who actively take part of EGF rated tournaments, and those aren’t free! Also, there is only a handful of those per year in a small country like Finland for example, are even those are mostly in Helsinki.

Hmm I think if you compare OGS to a MMO server you will find the number easier to understand.

In an imaginary scenario, Youth A learned about go from a friend and played a game or two with that friend. Later that night he thinks the game was pretty fun and goes to Google and type in “online go”. Ding ding, what does he get? 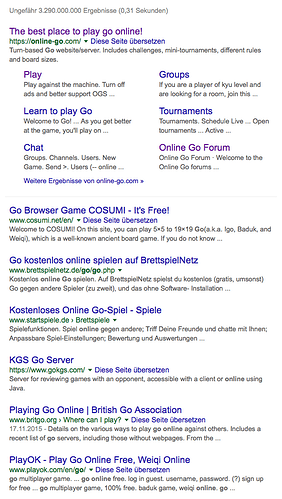