FYI there is a graph of OJE usage, which you can find on the “Updates” tab hidden by the button called “Details” 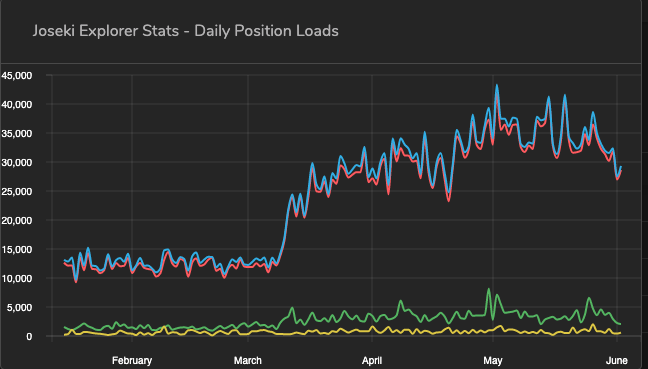 What do the different colors mean?

Add a new color for when the joseki dictionary is used by a user and at the same time that user is having a real time game, it would be nice to see that info

5 posts were split to a new topic: OGS Joseki Explorer has “Play Mode”

I’d say the OJE is probably a reasonable success? If I get a bit more focus I’ll try add more to it again from books or from Michael Redmonds videos etc.

It’s actually pretty interesting to play though, there’s a lot of variation even just playing the 4-4 point.

@Vsotvep are you pressing the back to empty board button or the play button again or?

Actually a suggestion I might make if it does get updated, is that now that there’s positions which just end with a link to other positions eg https://online-go.com/joseki/11044 the game just stops at that point.

So if it could either in play mode just jump to the linked continuation that could be great, or another option (might be harder?) would be that it could somehow avoid playing variations that end prematurely in a dead end because of a linked position.