Opponent gives up, sort of?

i’m in two separate tournaments against the same player, one match i won. the other match they sort of gave up halfway and kept passing. what should i do with it?, or should i do nothing?

Link to the game?

first match, second or both?

If they are behind, yeah that’s bad behavior and you should report it.

I would just play 10-15 moves to secure the entire board and then request counting.

Sometimes when I am very far ahead, I will pass to give a friendly hint to my opponent that they should resign. Not sure if that is the case here. Might help to see that game.

The match in which the opponent keeps passing? 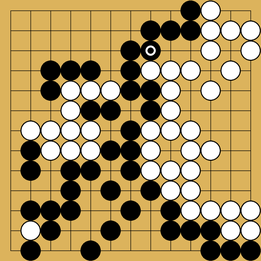 I think passing shouldn’t be considered “rude behaviour” under no circumstances. Refusing to count or meddling with the counting algorithm on the other hand should. So I think you should aim to reach that phase.

Oh yep, your opponent was ahead and got bored.

The game is almost finished, close the borders and then pass.

The border is not yet closed. Do you see where?

but why pass randomly from time to time then? they keep randomly passing.

Don’t care. YOU close the borders first and THEN you will pass.

They are passing because they can still win (by a lot) even if they pass. If this were an even game, I would say you should have resigned a long time ago, but if you are a beginner I can understand if you don’t see that.

Playing inside of your own territory ([REDACTED]) will lose you 1 point. You should focus on closing off the borders ([REDACTED]) and then passing yourself.

but why pass randomly from time to time then? they keep randomly passing.

It’s on them. When they pass they lose X points, where X is the value of the biggest sente move on the board right now. You can consider every pass a +X points to your score.

Sometimes when I am very far ahead, I will pass to give a friendly hint to my opponent that they should resign.

Is there really such a thing as a “friendly hint” that you think someone should stop wasting your time? That’s effectively what’s been said by passing early right? “I’m winning, I don’t want to play the game to the end, you’re wasting my time, please resign”, and maybe the please isn’t always implied.

Your last move (N12) still doesn’t close the border of your territory, and actually you lost a point by playing it.