OGS uses the rating and ranking system developed by the European Go Federation (EGF), which is an ELO based rating system. After each ranked game you play on OGS your rating will be adjusted a certain amount, depending on the relative skill of you and your opponent, and whether you won or lost the game. Your rating is then used to determine your rank, which in turn is primarily used to gauge how much of a handicap players should play with when they play against one another in order to have a more balanced and competitive game.

Ranks begin with 30 Kyu (often written as 30k) being the lowest beginner rank counting down to 1k being a very good player, then proceed to the next rank of 1 Dan (written as 1d) which is the start of the Advanced Amateur ranks, which then count up to 7 Dan being a very advanced amateur rank. There are also Professional rankings, written as 1 Pro (generally equivalent to a 7 Dan and written 1p) through to the highest rank, 9 Pro. Games played on OGS where a player has a professional rank are always unranked. 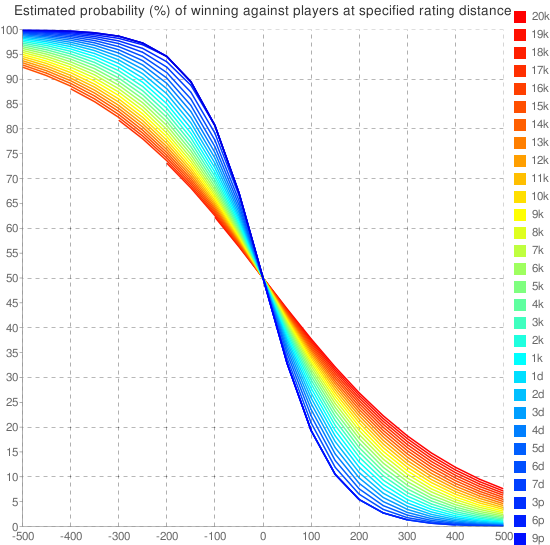 Graph showing the win probability of a player against players at specified rating distances, as calculated by the EGF rating formulas.

You can find more detailed information about Go Ranks and the math behind them in this page.

7 Likes
The ranking system
Docs on ratings?
Why does the rank go down after a lost game?
How i can read the stats in my profile?
Can anyone explain me how works statistics?
OGS Ratings Revisited
I'm new and I don't know how the rankings work
Scores in my Game History are incorrect!
Mourner June 30, 2014, 10:06pm #3

Question — does it count ratings at the moment of the end of the game or the beginning?

Is it possible to plot a similar graph of actual win/loss percentages derived from OGS? Might be useful to see how close to ideal the current system is. Would be very interesting too!

The rating that counts is which you have at the moment of the end of the game, @Mourner.

@jmstone if you go to someone’s profile you’ll see a plot of his/her ratings history. You can even zoom in/out and move the view using the mouse wheel and dragging. If that’s not what you refer to, then I didn’t quite get the idea.

The graph you posted is the estimated (theoretical) win percent. I think what @jmstone is talking about is the same plot, but with actual real data from OGS instead.

Exactly! Would be nice to have access to the game result database…