Sometimes an opponent will leave during a match. When this happens, I cannot click on their name, because of the countdown timer over their username/avatar/points area. If they have talked in the chat, this isn’t a problem. But often this happens when they have not spoken.

It would be nice to be able to easily contact them, without opening the side window. This is far from crucial, but it would be a nice little tweak to make the site even more accessible/efficient.

I am quite confident it is only a frontend matter, so if any coder is looking for a simple github task that would be appreciated by the community consider this issue

You can also open “Game Information” from right side menu, there are working namelinks for both player.

But yeah, i can see how annoying that can be. Maybe names could be shown under the timeout counter when the timer appears? Or would that look too messy?

I’m not so sure that would be a good idea. It would probably be primarily used by players to hassle the escaper, which is something we moderators advise against because it would lead to more fights.

I was curious as to what the point was to contact someone who’s left the game? Other than what you mentioned

Unless it’s more like “hey would you like me to pause the game, if you’re definitely coming back”

If they’re coming back, they’d be back by the time they reply to a PM … genuine disconnections are typically connectivity issues.

But at least you can see the whether they are still online or not when you open a pm window with them, even if you don’t even send any messages.

Of course you can never know if someone went offline because network issues or have they just closed their browser / ogs tabs on purpose, nor you can assume that everyone who leaves the game is an escaper, maybe your opponent is just quickly checking your profile and glancing your game history since the timeout timer allows it ^___^

what the point was to contact someone who’s left

Contacting is not the only action that is hindered by the escaper clock.

One might wanna check their profile to see if it is common for them to disconnect and thus they are unlikely to return so one can move to another match also report/block. I do not think all this functionality should be missing.

I’m not so sure that would be a good idea. It would probably be primarily used by players to hassle the escaper, which is something we moderators advise against because it would lead to more fights.

This is a really negative way of looking at it. If you have the types of players who go around hassling other players because they can, I don’t think the overlay is going to stop them from hopping into the person’s profile. If fear of bad player behavior leads to a lack of innovation or accessibility for the good players, then I think the bad players have already won

I was curious as to what the point was to contact someone who’s left the game? Other than what you mentioned

I agree that there are enough reasons to fix this.

I’ve taken a quick look, and while it is only front-end code, it’s not as easy as you would hope, because the layout of the game page is very funky, and the lightning bolt overlay is a funky part of the funky page.

Here’s a concept I found can be done easily, and I think has some merit: 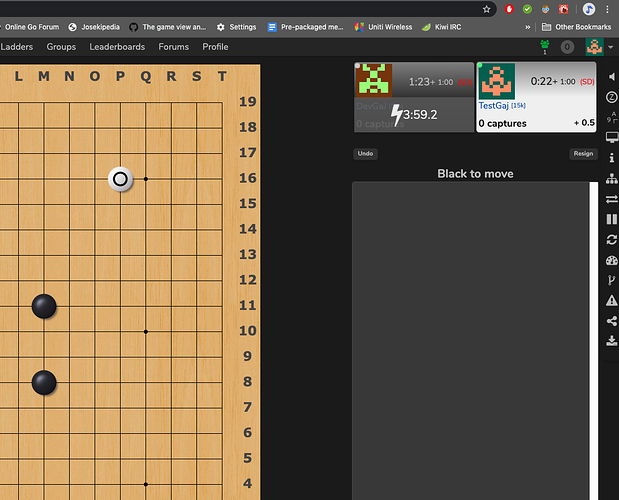 What I like about this is that it covers up the player’s name and the score (indicating the player has gone, and the score might be irrelevant now) and it leaves the game timer showing as well as the disconnect timer - this IMO is an improvement because the game timer still applies even when the disconnect timer is running. The current cover-everything lightning bolt obscures that fact.

Ummm…With their name still covered it’s still necessary to open the game info to find it. How about just covering the avatar?

On a related issue, I’ve often thought it would be handy to have a second indicator where that green dot is for ‘on page’.

So one for ‘on game page’ and one for ‘connected to site’.

Hah - LOL - I thought we could click on the avatar

Theoretically, the green indicator on the game page is only green if they are indeed on this page.

You definitely can see times where a person is grey on a game and green in a PM.

Just covering the avatar is not as easy as it sounds, because… layout funkiness. I’ll see about that though.

The green dot on the game page is called ChatPresenceIndicator in the pages source code.

What’s this one called and could it be easily added to game pages?

The main reason I sometimes want to click on a user’s name when they’ve left the page is simply to see this indicator.

How hard would it be to get hide the overlay when a user mouses over?

It would look basically the same as what it does now, but the box would be much more functional

On a related issue, I’ve often thought it would be handy to have a second indicator where that green dot is for ‘on page’. So one for ‘on game page’ and one for ‘connected to site’.

I cannot second this loudly enough. PLEASE!! And Kosh, you have vision my friend

This problem is further compounded by the fact that the lightening countdown does not disappear even after the match concludes. Is that part of the design, or an oversight? Doesn’t seem to offer any benefit after the match ends.

Can’t you just boost the z-index of the name and call it a day?

(probably a stupid idea, but I wanted to show off my z-index knowledge to the world…)

Probably an oversight, but it has inadvertent value to mods trying to confirm an escape rather than a legitimate timeout, especially since the majority of escapes, in my experience, end by the game clock rather than the lightning.