Players who disappear when behind

Sometimes when playing the other player simply disconnects without resigning or pausing or otherwise indicating that they have to leave.

I believe that there may a method for reducing the number of times that this happens.

Whenever someone does this to me (I let the clock on them run down to 1:00 minute before doing it, in case they are able and desire to reconnect) I resign. I believe that if massive numbers of us did this it would shame people into abandoning the practice.

What do other people think about taking measures like this to punish those who leave in the middle of a game?

From a moderation perspective, please don’t do this. In ranked games, not only will you lose rating points unjustly, your opponent will gain rating points unjustly. Giving them free rank may unintentionally incentivize their bad behavior. It can also put YOU in violation of our Terms of Service by disrupting the normal rank distribution and negatively affecting other users’ ability to find good matches.

I advise you to report such cases for moderation. Warnings from us will carry more weight than anything you can do, and our warnings are backed by the ban hammer. If you want to do more, you can let them know that leaving a game in progress is a rude and dishonorable act, and tell them to resign the next time.

Also note that it is within the rules to spend all your main time thinking and playing within the last minute. Ironically, You might be the one leaving the game without a proper reason.

i totally don’t understand how your resignation is a “punishment” to them.

6 Likes
lucasfelix September 7, 2019, 3:12pm #5
Yeah, I can’t imagine someone who consistently does that kind of stuff seeing the resignation and going “I’m so ashamed, I’ll change my wicked ways” instead of happily pocketing the win. 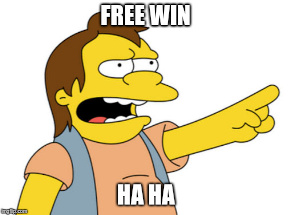 From a moderation perspective, please don’t do this

Woops. I have been deliberately tanking my rating recently by asking oppos not to resign (if they felt they were losing) in 9*9s so I could resign instead and drop rating.

I had managed to get to start getting an improved rank and was approaching 22 Kyu at 99 when I decided to start trying 1919. I suck badly at 1919 and have a realistic rating of probably around 25 kyu. So when I got a game against a 25 kyu then he would get 2-3 stones so (to me) it was not a fair game or representative of my own 1919 skill level. Therefore I decided to drop my rating back down to 25kyu so I would have fairer and more enjoyable 19*19 fights.

If the server ranked you according to your skill set at different board sizes then this would not matter.

So after having tanked the rating (sorry…) I had my first 25kyu game versus a 25kyu and lost but it was a fun game and probably fairly even as well.

I have to avoid 99s now as I am better at those but think I will learn more at 1919 playing against opponents at my skill level.

it was not a fair game or representative of my own 19 19 skill level.

You don’t need to “adjust” your ranking to achieve this. If, as in your case, you’re 22k for 9x9 but 25k for 19x19 then you can set up a custom game with no handicap that is open to 25k opponents only.

You can do almost anything with the custom game option. It is also possible to specifiy no-handicap in quickmatch finder and the rank range that you are happy to play against.

Woops. I have been deliberately tanking my rating recently by asking oppos not to resign (if they felt they were losing) in 9*9s so I could resign instead and drop rating.

As you have realised, you must not do this.

If you feel that you are differently ranked in different game types, you are allowed to set up separate accounts for using in different ways.

It helps a lot to be transparent about this, by putting a note to this effect in the description of the accounts.

You don’t need to “adjust” your ranking to achieve this. If, as in your case, you’re 22k for 9x9 but 25k for 19x19 then you can set up a custom game with no handicap that is open to 25k opponents only.

Is that true? I was under the impression that you have one rating that applies to all games and the tabuler shot of different ratings for different boards/types was for info purposes and not matchmaking purposes.

The fact that profile said I was essentially 25 kyu for the 19 times 19 and the combined field said 23 kyu then played a 25kyu at 19 times 19 and my opponent had 2 stones would seem to indicates this is true.

I think it will be an interesting question to confirm if overall or individual ranks are used for matchmaking - I for one are not clear on that!

Individual ratings are used for dealing handi stones, not overall rank- Two 10 kyus could play and one could give the other 2 stones cuz of the difference in their rating for that specific board size. (tested it after noticing some strange handi dealing)

edit: withdrawn after testing it again

As long as Conrad doesn’t catch him? shrug

Anoek has said several times that the overall rank is used for EVERYTHING and that the others are PURELY INFORMATIONAL. Any experience otherwise should be reported as a bug.

thanks for confirming that. It matched my own experience of matchmaking and I was fairly sure I had read it as part of the ‘how do ratings work’ lengthy discussion.

As long as Conrad doesn’t catch him? shrug

Actually, I always pay attention to whether the alt accounts are being used in a special way, board size, or time controls. Just yesterday, I left an alt account unbanned because it was clear that the player was using it for a variety of odd time controls, compared to his main account. I put a mod note on it for future reference.

Anoek has said several times that the overall rank is used for EVERYTHING and that the others are PURELY INFORMATIONAL.

I believe this to be correct. I have never seen evidence to the contrary.

Nonetheless, If you have a site overall ranking of 22k, you still have the option of setting up even games against 25k opponents using “Custom Challenge”. eg: 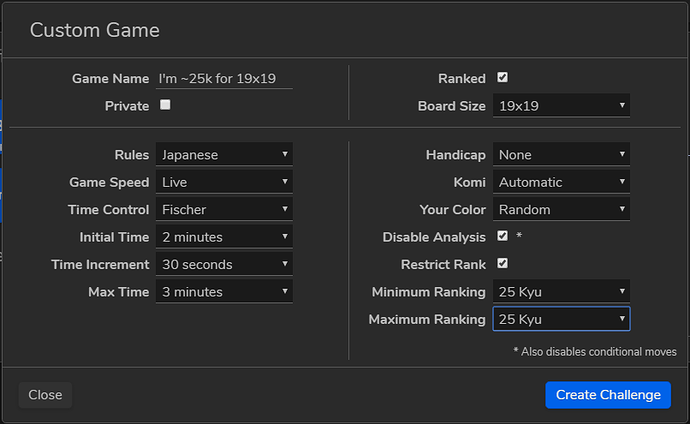 For ranked games, there is a limit of 9k difference in even games but this will work for anyone up to 16k.

The Quickmatch Finder settings aren’t as flexible as I thought. The best you can do is set them to no-handicap and seek a game from 25k up to your own ranking. ie. 25k-22k.

Note also that the different ratings on your Profile page/Rating Chart are not comparable to each other. For example, the only thing you can legitimately use your ‘Live 9x9’ rating for is comparing it to someone else’s ‘Live 9x9’ rating. You can’t meaningfully compare it to your ‘Live 19x19’ rating or a correspondence rating because these are derived from different pools of players/results.

I also have a higher 9x9 rating but my experiences suggest that you will quickly adapt enough to 19x19 to make the difference negligible, especially in DDK land. Multiple accounts can cause headaches in a variety of ways, especially if you use forums too.