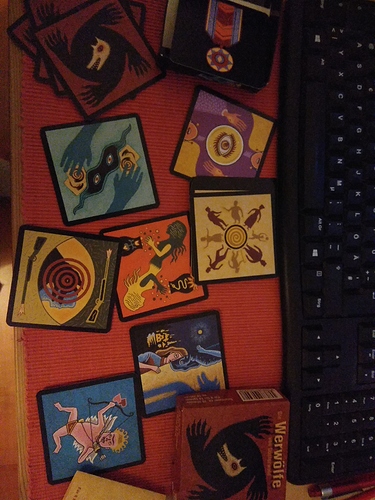 Amor works as follows: After everyone knows their role, Amor will, during the first night (with which the game usually starts - maybe it should be the first day here), choose two players (one of them might be Amor himself) who fall in love. These players are notified by the game master who the other one is (only the name, not the role!). If one of them dies, the other one dies as well. So, if one of them happens to be a werewolf and the other one a villager, they can only win if they are the last remaining survivors.

@yebellz if you want to have a go at it, I’ll volunteer to be the organiser for the second game, when that will eventually take place.

Maybe giving the seer a vision in night 0 would increase the dynamic of day 1.

I like this suggestion. Also, adding a night 0 would also let the werewolves discuss (with no night 0 killing) their game plan going into day 1.

I’d personally prefer it if the roles weren’t revealed upon death. It leaves more room for uncertainty if we don’t know for sure if the person we killed is a villager or werewolf.

I think this is definitely something we should consider. We used full information, while @RubyMineshaft is suggesting no information. Another option is partial information, i.e., reveal the team (werewolf or villager), but not the special roles (seer, protector, etc.).

First of all, I propose to change the rules, in general. If we play with more or less the same few players and same rules it’s a bit boring. Although It would emphasize who says what and how people played previous games, I’d find it more interesting if each game was played with slightly different rules and each side would try to take advantage of it, like Formula 1.

Yes, I think we should definitely change the rules for every single game. In past games on another forum or in parties, we used different rules in every single game, even if it was a little tweak that we thought might make it better/more balanced. I don’t think we should immediately rush into starting game two, but rather give it some time and thought about what new rules, different roles, and other changes are needed.

We could even give different games different themes, like call the faction “mafia”, “vampires”, “zombies”, etc., with appropriate modifications to fit each theme. I think it would be interesting to have “vampires” that have the option to “convert” a villager into a new vampire rather than killing (maybe this would be limited to only a few attempts over the entire game, and these could be blocked by the protector). Further, maybe if the vampires fail to kill for three consecutive nights (from protection or by choosing to convert instead), they all immediately lose due to starvation. Of course, this would require a lot more players and fewer initial vampires for this to work.

The wikipedia article has tons of ideas for different roles: https://en.wikipedia.org/wiki/Werewolf_(social_deduction_game)#Optional_roles

Second of all, lunatic breaks the game, doesn’t it. And probably specifically because they form their own faction.

I think we need to carefully consider how to design the lunatic role in future games. I agree that a three faction is particularly problematic and makes things difficult to balance. Even balancing a two faction game (when considering all of the possible special roles and mechanisms) is very tricky, and throwing in a wild card third faction that may have to resort to desperate strategies can create a lot of chaos in the game.

Could we maybe give a “night shift” to a random villager each time?

That’s a great idea to give everyone a chance to be involved during the night phase. I guess we could have the one or more of the roles randomly rotate, but maybe there is still the possibility that the role being eliminated if the wolves happen to target the person assigned to that role for the night.

game with few players. By the way, I’ve looked up the “original” werewolf game and it’s for “8 to 18” players.

Seven players was definitely on the smaller side, and I think led to things ending too early. The game gets really interesting with more players, since analyzing voting patterns and associations over several days gleans a lot of information. Visible cliques begin to form. I really hope a lot more people sign up for game two.

Speed: As we are in very different timezones, 2 days per day seems to be ideal to me. And yes, the night was boring as a villager. What do our “werewolves” say, would a 24h-night also be sufficient?

I think a 48-hour day and 24-hour night would work well. We used something like that in other forum games before. It only puts a little more time crunch on the strategizing by the wolves, but I think it’s still feasible.

I’ll volunteer to be the organiser for the second game

Thank you, that would be great! I really appreciate your offer to organize the next game.

How about the following rules for game 2?

I have 6 to 9 players in mind. With more players we can include more roles.

There will be one secret vampire, and the following special roles for the villagers:

The day phase will take 48 hours, followed by a night phase of 24 hours. We will start the game with a night phase.

During the night phase the following happens, in this order:

During the day phase the villagers get to choose one player to be executed.

Upon death, the affiliation (villager / vampire) of the player will be announced, but not the special role.

The vampires win when the whole villages consists of vampires, and the villagers win when no vampires remain.

Who wants to play along for game 2?

I’ll try to recruit a few more players from outside OGS, if necessary.

Perhaps you might even interest them in playing go!

To the suggestion that we shake up the rules, I couldn’t agree more. We’ve seen each other in action and will need to keep it fresh each time to minimize any psychological and strategic carryover. Unless of course it’s to be a completely different group, which looks highly unlikely. And, as S Alexander pointed out, it just gets boring otherwise.

So the doctor’s treatment is a hit and miss thing? Am I understanding that correctly?

That sounds fun, but what happens when a vampire is cured and becomes a normal villager? Wouldn’t they know the identity of every other vampire?

So the doctor’s treatment is a hit and miss thing? Am I understanding that correctly?

I guess so, we could add that the doctor gets notified about if he was succesful or not.

That sounds fun, but what happens when a vampire is cured and becomes a normal villager? Wouldn’t they know the identity of every other vampire?

Yes, but then the following night new vampires might be recruited, or old ones might become cured, and of course there’s the problem that nobody might believe the cured villager.

and of course there’s the problem that nobody might believe the cured villager.

In the case of a successful cure, if the doctor was not killed, then at least they would believe the villager. It still seems like a very powerful mechanic that can reveal a lot of information at once.

Wouldn’t the vampires always want to convert rather than kill? This removes a villager and bolsters their numbers.

By the way, in an earlier post I suggested that we add mechanics that limit conversion abilities of the vampires:

“vampires” that have the option to “convert” a villager into a new vampire rather than killing (maybe this would be limited to only a few attempts over the entire game, and these could be blocked by the protector). Further, maybe if the vampires fail to kill for three consecutive nights (from protection or by choosing to convert instead), they all immediately lose due to starvation.

Feel free to suggest how to change the rules to improve them, because I don’t really know either.

By the way, in an earlier post I suggested that we add mechanics that limit conversion abilities of the vampires:

After thinking a bit more about faction switching mechanics, I think we should be very careful about introducing them into the game.

For faction switching from villager to vampire, this might have the effect of accelerating the game into the favor of the vampires. Thus, I think we need to start with relatively few vampires and limit their conversion abilities in some way.

For faction switching from vampire to villager, I think we might want to avoid this altogether. First, it has the potential of revealing all of the information all at once to the villagers. If the doctor makes a successful heal, then the cured player should immediately reveal the identities of the vampires on the next day. Even if the cured player is then immediately executed, that would only confirm that the identities (if player factions are revealed at death). Second, the presence of this mechanism might create a perverse incentive for a vampire to actively betray their team, say by trying to hint to the doctor that they should be cured, and then winning as a villager after being converted. In fact, when cured, I think that new villager would want to reveal the vampires and then actually request to be immediately executed in order to prevent being converted back to a vampire, which are now at a distinct disadvantage.

Faction switching (if not limited) could also result in some peaceful endgames where all of the players win.

For example, the villagers could choose not to execute anyone during the day, and not try to block any conversions at night, while the vampires convert all of the villagers without killing anyone. Eventually, everyone could win as a vampire.

Another example, the vampires could reveal themselves and agree not to kill or convert anyone, ask that the villagers do not kill anyone, and wait for the doctor to eventually cure all of them. Then, everyone could win as a villager.

Good, you’ve convinced me. Then how about this:

The doctor gets to cure a villager of vampirism only on the same night that the villager is converted by the vampires.

Ok, I think this would work, but the doctor here is essentially just a protector that can only block conversion attempts.

I tell you what, Dracula would have been mightily perturbed at having to wait 48 hours. But I like it. This has the potential to be very complex indeed. It’s a hearty brew.

I don’t want to commit right away. If the numbers are thin again I’ll play, but if there’s an influx of new players I’d prefer to sit this one out. Either way, I’ll be following with great interest.

I think this sounds much more manageable. Starting with a single vampire is a good idea