Hey, I was just wondering if there was a good source for playing capture go/atari go online
I want to use it as a teaching tool to entice my partners (we’re long distance), but it’s hard to find anywhere to actually play it.

Any help would be nice <3

I’m not aware of any good place that supports capture go specifically - my suggestion in this case would be to just play on your favorite go server (I hear this one is pretty nice) and agree that the first player to get captured will resign.

If the other player doesn’t already have an account, the new challenge links feature could be useful.

Good luck with the enticing!

yeah, I’ve been getting by with screensharing a demo board, but it occurred to me that I might ask about it…

Indeed could be a nice feature to implement

Capture go might be a nice next variant to add to

Collective development of a server for variants Go Variants

I realize the previous “Next Up” steps have been completed in some form, so I’ll post another update

Many times, we initiated players to our subtle art just push far too much into many obscure concepts so that could offer some more simple way and goal to reach at first.

I’ve been getting by with screensharing a demo board,

What about playing unranked games and just resigning whenever someone captures some stones? That should be easier than using a demo board.

Would capture go be an easy variant to add?

If the game already tracks captures you just need to end the game when the first capture happens?

Would capture go be an easy variant to add?

This should be one of the easier ones. One way to do this would be to inherit from the existing Baduk variant, and end the game when captures becomes non-zero. You could check out Phantom Go as an example of a variant that is so similar it just inherits from Baduk.

One big issue: we don’t actually show that the game is over in the UI, so its a little anti-climactic to end a game at the moment. Respect "gameover" phase · Issue #26 · benjaminpjones/govariants · GitHub

TypeScript! The other notable tech is Vue (client framework), Express (backend), Mongo (database), but you wouldnt necessarily need to touch all that. Most new variant PRs only touch the shared code (just TypeScript) and a little bit of client code (Vue + TS).

Hi, I found this, if it helps. It’s Atari Go on a 9x9 board, and it’s possible to set the goal so its first to capture one up to ten. There are different levels of difficulty. I’ve only learned Go four days ago, so I don’t know if this is complex enough for you, but it’s helped me. There is a lot of free content for beginners on this website too,I think people will enjoy it. Play Atari Go (aka Capture Go) Online with a Computer / Bot

It looks interesting for beginners, however it doesn’t allow two different players to play against each other, unless they are in the same room and use the same computer.
The bot is DDK level and is pretty slow at levels 5 or 6, but is probably good enough for beginners.

thank you for showing it to me,
it’s not quite what I’m looking for, but I’ll send it to my partners if they want to use it

Thank you - I thought it might be a bit too easy! I’ve only been playing a week, and I’m pretty rough around the edges.

Gomagic are asking for suggestions of what to develop next - maybe drop them a line and see if they’re interested in developing a more sophisticated version of this that you’d get more use out if?

I am a rank beginner - I can only just beat it on level 2. I’ve been playing a week and my brain is slow. Maybe taking it up at 51 will stop me getting dementia, but I hope the younger, more talented set here will have patience! I hope to get better, but I don’t know what my chances of hitting SDK are.

Don’t worry, you are not senile at 51 yet. You can certainly become SDK if you study patiently.

Capture go is arguably the simplest possible go variant. The only rules are: Black and white take turns placing stones. Passing is not allowed. The first player to capture one (or more) of the opponent’s stones wins. Capture go is a great way to introduce new players to go, since you don’t have to explain scoring or ko. But it is also an interesting variant for experienced players. Many of the tactics from normal go no longer works, most obviously snapbacks and throw-ins. This means that it i…

Edit: I’ve beaten level 5 now but it takes forever to make its moves when it’s losing, and level 6 might have a bit of a weakness 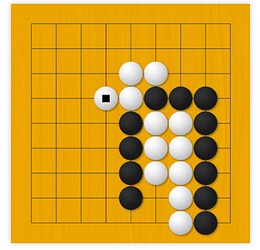 Oh, I know I’m not senile yet, just hoping to stave it off! I worked with dementia patients, and it put the fear in me, unfortunately. I noticed that the patients who had more than one language, or who played games of skill (chess and go) or who knitted had far better outcomes though. But mainly I’m learning because it seems like such a wonderful game. I play chess, but Go seems to have a different vibe. Chess seems more spikey; Go, on the other hand, seems like you’re trying to reforest an island. It’s like if the Ents went to war, instead of men and orks. (Okay, I am a Tolkien nerd.)

I just merged a pull request for Capture Go on govariants.com if you would like to try it. I think the “create game” flow is a little rough so I’ve written instructions here, and let me know if there are any issues in starting the game.

Here’s a game I played by myself locally (note: I have to keep clicking the “seats” to switch players. You won’t have to do this if you are playing someone else.)

And I just played my first game against an opponent here! Go Variants

Just a heads up, on the Fox server, if you click the “Choice” button right next to “Fast Matching” it will display two modes: Capture 3 Stones on a 9x9 and Capture 5 Stones on a 13x13. Haven’t tried it though!

Thank you very much! I will absolutely try this out!