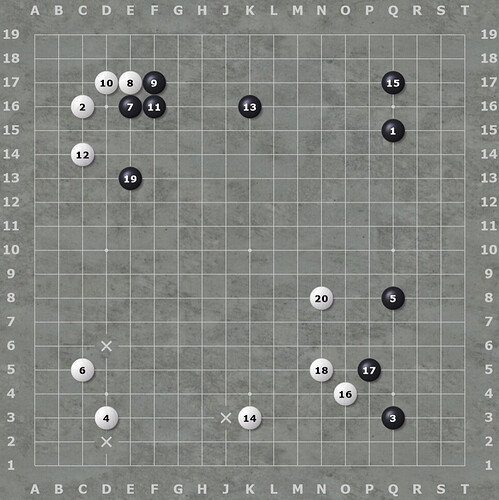 Playing the South Manchurian against @Trevoke

On (13), I can choose between the extension and the immediate enclosure at (15). I still prefer the extension.

(17) would’ve been a bit more reasonable at Q5, rather than at P5 where it was a little thin.

(18) is interesting in that it doesn’t induce Black to thicken the corner, unlike an exchange O6–P6.
I was very unsure of where to play (19). At first I considered playing it at O8, which I still find reasonable but slightly overconcentrated. Then I thought about a move like Q11, which I did play later on (41). In the end, the game move seemed most efficient.

After White’s photogenic jump (20), I invaded fancily by exploiting the X points.

If I were to play the opening again, I might not be so grasping with (17). The bot suggests that (17)'s value is very similar at P5 and Q5, but Q5 is clearly more solid. 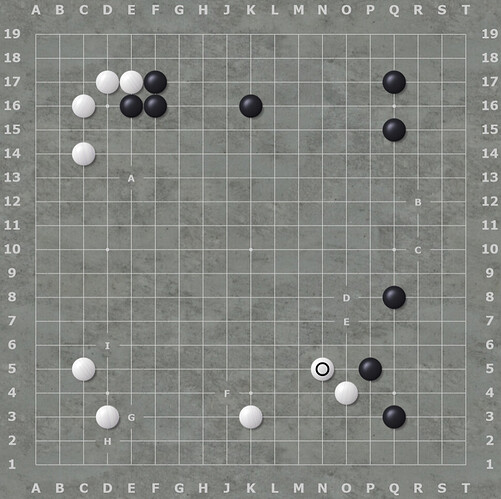 A is the game (–7%). C is the blue move. F and I are green; some unmarked spots are also greenish.

I do not understand this. Are you suggesting I should … do this joseki first, and then come back to 6?

I’m suggesting that your E17, that you played as Move 8, should’ve been played on Move 6 instead.

ie. that it would’ve been more natural to enclose that corner before enclosing the lower left.

I think we misunderstand each other – I’ll make a diagram.

Oh no - because I already have a stone in the top left. I see. Hmm. 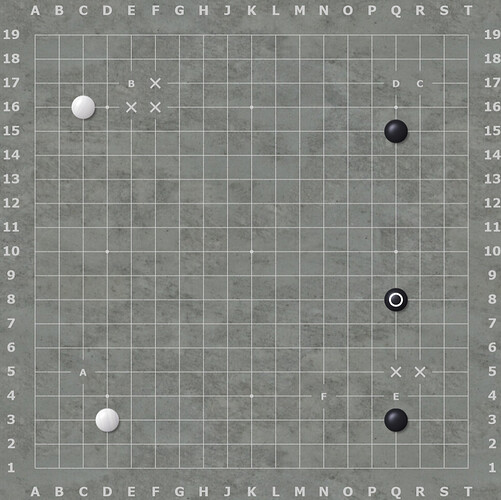 There are essentially four key areas on this board.

The opinion of the bot is that you should immediately take the invasion C. This is a fine way to play but perhaps a little inhuman as Black can, after concluding play in the top right, proceed to the top left and begin play there. This is what happened in my discussed game against fledermaus.

The idea of enclosing at B or one of the Xes is to increase the “depth” of your left-side formation, which is to say its development potential, and simultaneously diminish the value of the top, which is advantageous since Black can play there afterwards (which, after B, he may not even want to do).

In the southeast, the Xes are the most committal ways of addressing a Chinese formation. In pre-Hypermodern play, they were contrasted with the “non-confrontational” F, but AI-era Go has adopted the flexible attachment E.

Why is A flawed? Because the top side is more important than the bottom side.
Why is the top larger than the bottom? Because of the position of your komoku. If it was the other komoku at D17, not allowing Black such a pleasant approach, then the top side would not be so urgent.

Consider a similar position, with a sanrensei on the board. 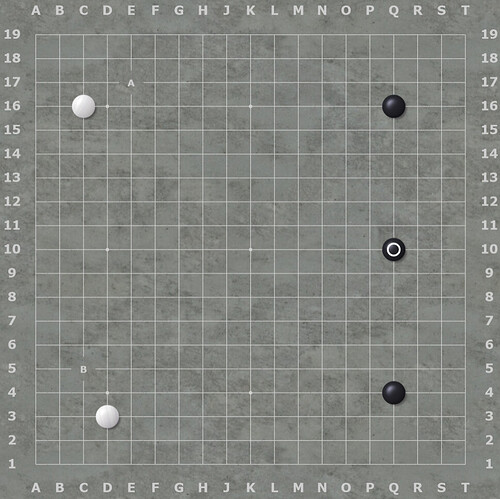 Do you want to enclose at A or at B? How do you think the opening will progress from either option?

Can you see why A is more of a foil to Black’s intentions than B?

Here are a few relevant pro games with the “rotating komoku system” as well.

Back on topic, these pages are relevant as well.

SL uses the term 1-3-5 as an equivalent to Sino-Tibetan formation. I forgot that, or else I might have continued using that term as well.

Maybe you can really reconsider the name system which confuse people on a way players play this in some areas of the earth.
Some more poetic neutral names?

Manchurian fuseki has been the term in use for over twenty years. It’s not a new name.

Used by who, where? It’s in sensei library once, didn’t notice myself to be an established name of general use. Chinese opening is a adopted name with go historical reference. Manchurian is a kind of not so well inspired name which lead in confusion, and extending that to even more denomination even worse.

Used by who, where?

That doesn’t make it a go term.

The mere fact that it is being used as a Go term is all that is necessary to “make it a Go term”.

But is it used? Just find us somewhere else where this name is used. Some openings article in some go Western newspaper some tournament report… 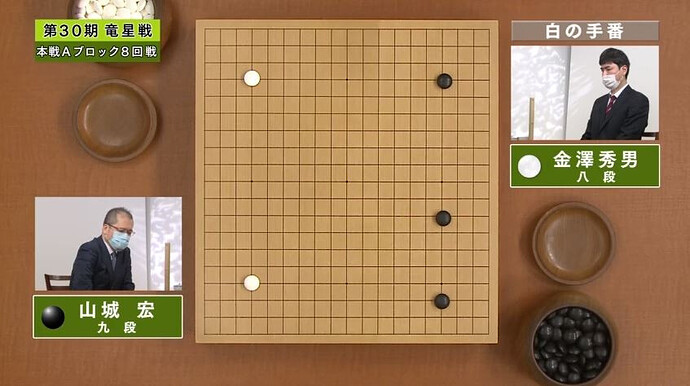 Its third-line equivalent is called the runty Chinese on OJE.

In this thread from January, Alex suggested that that third-line variant was called the Vietnam fuseki, and I responded that I called it the South Chinese and that I thought I’d heard Cantonese fuseki before.

To give names like these it should have some (modern) historic reference at least, like cantonese players favored it, or their pros.