I notice that the UI has been completely revamped, meaning that information given to our club group members to help them navigate the system is now wrong in places.

Also, a game that was played in our club group is not visible to me, even though it was not, afaik, labelled private. On enquiring about this of one of the players, I was told perhaps it has something to do with something called ‘access settings’ which I had never heard of and which perhaps(?) didn’t exist until recently. I didn’t know what it was or how to find it, but a screen shot of the game from the player made me aware it is now an option on the game menu. It’s not an option on the game menu for any of my games, probably because it only came into existence after I played my most recent game(?). Therefore I have no idea what is all about and can’t even find out by stumbling about blindly in the system, because that button literally doesn’t exist for me.

Wouldn’t it be a good idea to notify of important changes to the system, preferably before they’re implemented and to supply some documentation about how they work?

Having found the new location of the docs & faq menu entry and clicked on it, I searched for ‘access settings’, but the phrase only occurs in the middle of some computer code which I don’t understand and don’t want to have to learn just to play go with my friends.

Hi All, We’ve got a new experimental navigation bar available that we’d like to see how y’all like before deploying it for everyone. It looks something like this: [image] It’s overall a bit taller for most devices, though if you have a short screen it’ll collapse to be the same height as the existing bar. The bar will also collapse to a hamburger type menu when the window is narrow (like you’re on a mobile device for instance). You can opt in to this experiment by flipping the “Enable exper…

Sorry you missed the announcement and subsequent discussion. If you have feedback and especially suggestions for improvement it would be great to hear about them in that thread.

Most users find the new interface an improvement even if there might be a period of adjustment.

The docs and FAQs are a wiki so hopefully someone will update them at some point.

I’m not sure about the access setting thing so I’ll have to get back to you on that. Are you able to share a screenshot? PM me if you prefer.

Chiming in about access settings, those haven’t changed at all and have been present for many years now.

If you can’t access a game because it’s private, you’ll have to ask one of the players to give you access to it.

Here is the game menu from my most recent game: 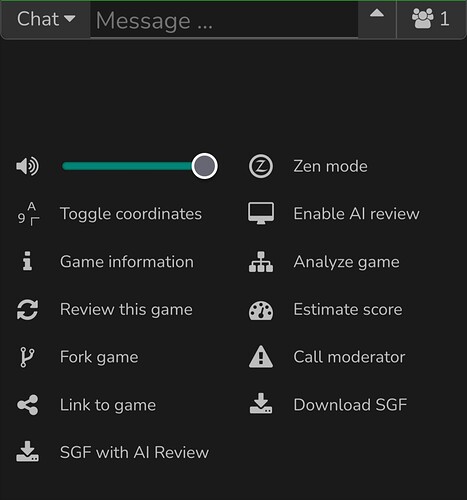 and here us the game menu from the one I can’t access (player sent me screen shot): 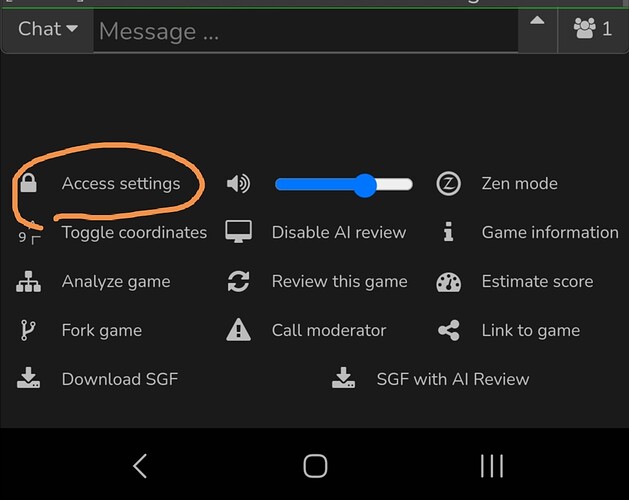 Access settings is not an option on my game.

Access settings is a menu that does (and I think always has?) appear only on private games.

Games are “private” when that checkbox is ticket on challenge creation.

Therefore the only possible conclusion is that “private” was ticked when this game was created, and in order to see it you need the owner of the game to click that button and add you.

Eugene, thanks for explaining. I’ve just come off the phone from talking to my colleague (the challenger in the game in the screen shot) and that is what happened, although he hadn’t realised originally that the game was set to private. That was just a hangover from his previous game, which he had intended to set private. I’ve never used the ‘private’ option, so had no idea of the ins and outs. We did an experiment where I challenged him to a private 9x9. Sure enough, ‘access settings’ came up as an option when I viewed the game menu afterwards. I also experimented with adjusting the privacy and found I could make the game available to our club group. There doesn’t seem to be an option, though, to set it available to all, only selected individuals and groups.

That is definitely true. There is currently no way to make a game “no longer private”.

I suspect that the rationale is a compromise between “needing to expand the visibility of a game once thought to be totally between two people” and “needing to protect people who acted in whatever way (playing experimentally?) thinking that they were safe from scrutiny suddenly being exposed to the whole world”.

Yes, that sounds reasonable. Btw, is it only the challenger who gets to change the access settings?

Why don’t you challenge me to a private game and we can find out!

Thanks for the offer, Pierre, but I’ll just ask AJ about our test 9x9.

Now you mention it, I do remember that. Was the forthcoming change announced on OGS itself, I wonder? (Not everyone read the forums.) Was it, in fact, announced even on the forum once the new format was settled?