Progress, Encouragements, and Resignations in the WDC!

Play 100 Ranked games in February for the Western Dan Challenge!

Firstly, there’s no shame in giving up. Maybe it turned out to be harder than you expected to fit into your schedule, or unexpected affairs popped up, or you plain just lost interest. It happens. Playing in tournament-like conditions is stressful. (Have you heard about the Chess Grandmaster Diet)? It’s an actual challenging challenge to play 100 ranked games in 28 days. So it’s normal to start and give up.

That said, it’s not too late to Not Give Up and keep going! There are still three weeks left! That’s an average of about 4.762 games per day starting from nothing right now!

This thread is for giving and receiving encouragement, announcing your progress, making and taking polls, as well as throwing in the towel.

Here’s my story so far: I started strong with 10 games played on Feb 1st, and 7 games played on Feb 2nd. That was comfortably ahead of schedule. I got a little too optimistic and thought I’d be able to do 200 games by the end of the month. But my progress tapered off sharply and now I’m behind schedule for even 100! I need to play about 3.762 games per day on average to finish the Challenge, and I know I’m going to get busy the last week of February, so… oh … wow I have to get playing. Wish me luck!

How’s it going for you?

I did six on the 1st, five on the 2nd, and three on the 3rd and I haven’t played since then.

After this encouragement, though, I’m going to play some today.

I’d also need about 3 ¾ games / day to get to a hundred. But as long as that number stays under 4 or even 5, you and I are still pretty much on track.

I am trying to reach 1000. This means 36 games/day.
I am on the average right now (correspondence helps a lot) but it’s quite hard, I will maybe resign my plan. Let’s see

wowww, One Thousand. That’s gotta be the real NaNoWriMo of go. I wish you determination and success!

I wanted to discuss this position from the game I just played. 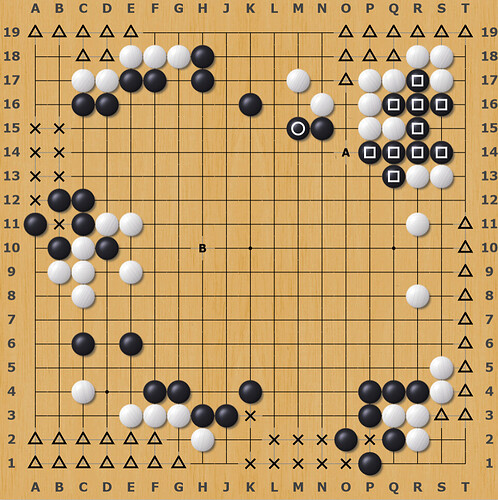 Black has made a few mistakes in the opening, so White has a better position. White has about 40 clear points (before komi), whereas Black has less than 20. Black has also has a cyclopean group, marked with squares.

The correct answer is B. Since White hasn’t yet defended the left-side group, it’s premature to enter a fight in the centre – although the squared group is weak, it will still be stronger than the cutting stones; either the newly-created A group or the established left-side group could potentially be harmed in the combat.

In the game, this fight resulted in the capture of that left-side group, though I still won by 15 points with komi; if I’d made a mistake in time pressure, though, I might’ve had to concede large parts of the centre.

The lower-right shape, by the way, emerged from Black Q18 in Play Go at online-go.com! | OGS.

Forcing yourself to play Go is never fun, but 100 games is reachable I think. It helps when you find a nice opponent who will accept rematches over and over. I might do a mini challenge to see how many blitz games I can play in one day, and then cool off after that and just get 1 or 2 in daily.

19/100 so far. 3.867 per day to go.
@_Sofiam How do you find 36 matches per day on OGS? I have to wait quite some time for automatch or accept weird time settings… what is the best time to find games on OGS?

I usually play blitz on afternoon/evening CET. I am 5-6k and I never had problems at finding opponents, I don’t restrict rank in any way and play even games.
Another good way to find games are automatic sitewide tournaments, I join all the Blitz 19x19 and Live Swiss 19x19 that I see.
But as I told before correspondence helps me a lot. I started 1026 games in december [Plotting number of simultaneous games over time see this] and I have to finish most of them, I was going slowly before this challenge and now I am trying to hurry up (without forcing anyone to answer me quickly, obviously)

I played a couple of games today (16 total), so my games / day from tomorrow would be about four.

Usually I play about 20.

Currently have 23 games completed (if I only count in my time zone, I forget how many it is if I count the extra ones from the GMT start, maybe 26), so just barely on pace for 107 (not counting today, as I have yet to play games today).

My rate has decreased slightly the past couple days as I have been in a bit of a negative mood about my play and focused a bit more on studying pro games and books, but intend to be back on the grind.

I’m averaging about 2 games per day so far, which is pretty good by my standards

Today I lost against a 3k in an even game, and won against a 1d giving three stones handicap. My mood really affects my playing strength a lot, hoping to be a bit more stable by the end of the month

I signed up for the challenge but I was under no illusions from the start - I was never going to achieve 100 games in Feb. So I was never aiming to do that. I am just aiming to play more than usual, which I am doing.

I usually play mostly correspondence with about 20 simultaneous games so I usually complete 1 or 2 per month, if that. Plus occasional live games here and there. But, thanks to this challenge, I am currently playing one blitz game most days, sometimes two, and trying to complete all of my ongoing correspondence games this month (depending on opponents of course). If I do that, I reckon a realistic target for me is 30. But I’m interested whether other people have personal targets that are less (or more) than 100. So, anyone got a target other than 100? I’ll post this question as a poll if I can work out how to do that…

Actually, I don’t take part at all; I just wanted to see how others voted.

Although I must admit that only from reading about the challenge, I’m tempted to play my first ever blitz game. Maybe even this month. 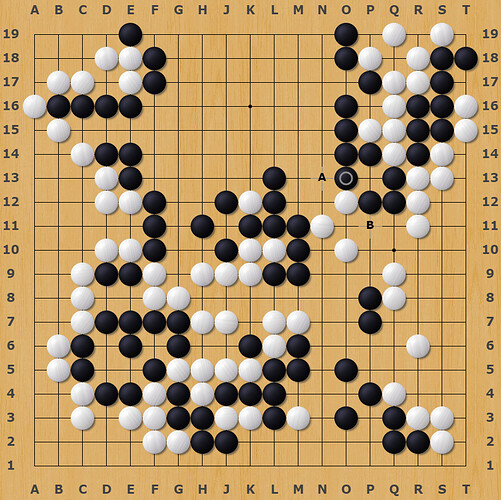 I chose incorrectly in the game

B is definitely safer haha. Is the game close?

I think you can play A. You seem to be able to connect to either the right-side or central group, and retain connection to the A stone.

N10 is an interesting move in both sequences to find though