Question about playing branches during a game

I often visit ogs, as a guest, to watch games currently going on and will play branches of the moves actually played. Recently, the players commented in chat that the guest was distracting. Can players see the new branches that a guest or logged in user makes during the game? If so, I will stop, as I do not want to disturb players and will wait until the game is done and review it privately.

I don’t think they can see your variations (or if they can, its a bug), but they can see that you’re watching

Note that the players in theory can’t even see the comments you make in chat, let alone branches you explore.

So in theory we have done everything we can to prevent onlookers distracting the players.

As benjito said, it is most likely the mere presence (which they can see) that distracted them.

I wonder what we all think about “should the players be able to tell that there are people watching?”

I wonder what we all think about “should the players be able to tell that there are people watching?”

If it bothers players that someone is watching their game, they have the choice to play in zen mode. In that case everything but the goban and play controls are hidden.

Zen mode can be activated via the game control panel. 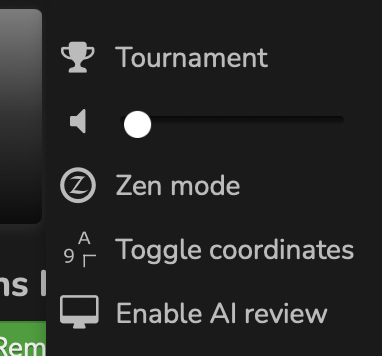 Deactivation by clicking the encircled Z in the top right corner.

Also, if you don’t like being watched, you can make a game private.

In a custom game (when you create a challenge) you can opt for a private game.

Is there, when you accept a challenge or participate in a tournament, an option for a private game?
Not sure about it, but I think it is not possible in this case.

Probably if you’re above 1d I can imagine there being a chance of there being a small audience watching, since they’d be sorted to the top of the games pages.

the players commented in chat that the guest was distracting

This seems very strange to me.
I wonder how a player could be distracted by that small number being more than 2.
That’s the only thing players can see during the game.

Is it possible that one of the third party apps allows players to see more than they should?

i have had the players talk about me in chat while i was spectating a game before. apparently some do notice

Thanks for all the replies! I should have just asked “Can players see comments or alternative branches that I do while their game is ongoing?”.

Or if they cheat by using a second device or browser (¿tab?), Under a different user or logged out.

They can find out who is watching by clicking on the number of participants.

But it could easily be that people unused to playing in public are just uncomfortable with the thought of being watched.