What name would you chose for a variant of a famous drink aimed at go players?

And for Australian players: Koka Koala.

The question I want to ask but doesn’t deserve its own thread is:

Did y’all know this

The Aarne–Thompson–Uther Index (ATU Index) is a catalogue of folktale types used in folklore studies. The ATU Index is the product of a series of revisions and expansions by an international group of scholars: Originally composed in German by Finnish folklorist Antti Aarne (1910); the index was translated into English, revised, and expanded by American folklorist Stith Thompson (1928, 1961); and later further revised and expanded by German folklorist Hans-Jörg Uther (2004). The ATU Index, along w...

Because I’m fascinated and never heard of it before, although I’ve been interested in folklore for decades now.

Yes, I know of it, and I have a copy of it in an appendix to Stith Thompson’s classic book, The Folktale (1946). Folktales and folklore have always been a huge interest of mine, as I have mentioned once or twice on OGS. It is a major category in my book collection, numbering several hundred volumes and having a worldwide scope. I have never bothered with exploitative retellings. I prefer first-hand material, or high-end retellings that have detailed source information. Some of my most prized volumes include James Izett’s Maori Lore (1904), Tibetan Tales Derived from Indian Sources by F. Anton von Schiefner, translated into English by W.R.S. Ralston (1906), Myths and Myth-Makers by John Fiske (1872), Xingu: The Indians, Their Myths by Orlando and Claudio Villas Boas (1970/1973), How Did the Great Bear Originate: Folktales from Mongolia (1988), and many others. One with special meaning for me is Hollow Folk (1933), a classic anthropological study of an Appalachian community, by Mandel Sherman (anthropologist) and Thomas R. Henry (a journalist and ghost writer). I have hiked the hollows and mountains of the study community and seen their ruins and other remains in Shenandoah National Park. In addition, my mother was a friend of Tom Henry, and I believe I met him at a National Press Club picnic in the 1960s. 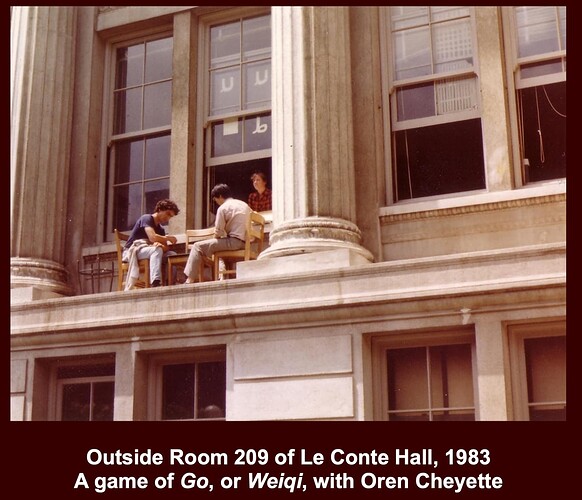 You didn’t ask a question, but I’ll try to answer. Having dropped in on a physics class maybe in this exact hall, and finding it impossible to focus on the lecture even though it was from the world’s leading authority on the magnetic field of an infinite cylindrical wire or whatever the topic was, with the beautiful Berkeley spring day drawing my attention to those windows - I can totally understand their motivation here! 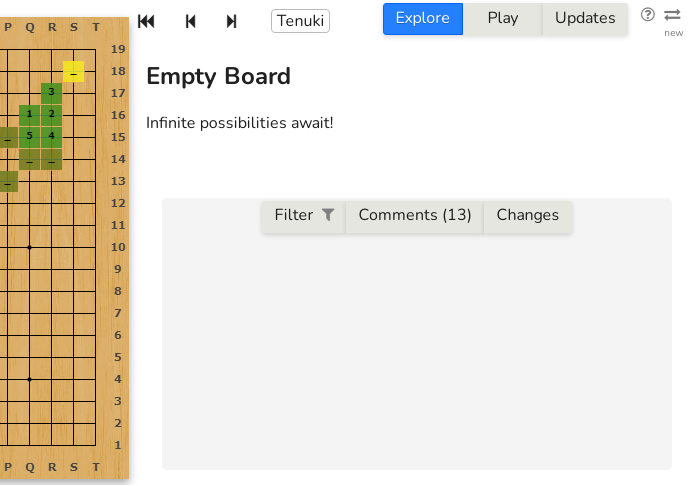 The way to answer this is to swap and see which one is faster.

If you can’t tell, then it doesn’t matter

Just kidding - this is perennial problem with buttons like this. In this case, the “new” means “you are on the new” and the button means “press this to swap”.

How about having both “new” and “old” there, and one of them greyed out?

Yeah - that sounds right. It takes some space, but I’ll bear that in mind for another time.

What is the supposed difference between “old” and “new”?

Is new version just meant to run faster? Or are the joseki actually different? Why have both versions?

Old is the “old backend, which I built on Java when I was learning Java and experimenting with Neo4j”

New is “the new backend I built compatible with OGS technology, with hopefully faster and simpler implementation, and amenable to anoek help if performance tuning is needed”.

Old versions of the Android App are still pointing at the old server, but it is locked down for edit.

How often do you get internet disconnections from your provider at home?

About two or three times a week, but it’s always in the middle of the night, which I guess is good for most people, but I find it pretty annoying. Usually is solved within 10 to 15 minutes as well.

Amsterdam was about once a month, I guess.

Now that I have discovered this thread!
Does the ranking system care for different komi and handicap and if so - how?
In other words, will the rank of the players change in a different way if a 5k and a 8k play with 5.5 or with 2.5 komi?

With 2.5 komi you can’t play ranked games on OGS.

I just picked a random number

Automatch ranked games sometimes have 3,5 komi - does this have an effect on how the games are rated?

Does the ranking system care for different komi and handicap and if so - how?

Yes, it is supposed to adjust for this, where the rank should be computed as if you’re equally ranked when the game has balanced handicap. Or at least, that was the case last time I checked.

The system starts reducing komi when games are ~>2kyu uneven in 9x9 and they are still rated uneven after the 2 point komi reduction (obviously). Does someone know how the 2 points komi are translated in terms of kyu increase for the lower rated player?