I think that reading ability should be taken into account for the ranking of a person.

If you need to represent the sequences on the screen, because you can’t do it in your mind, it seems to me that it is the same as solving tsumegos playing randomly until you find the answer.

Since this option is getting a lot of negativity currently - I personally don’t care for it in blitz or live matches, but do like it for correspondence matches.

This has been discussed in full length many times. Here one of the most relevant thread.

I think that it would be better to disable the analysis for every game until it is finished or that is is the default setting (especially for the site ladder games) for two main reasons: It fosters reading and therefore leads to improvements in the long run It reduces the incentives to cheat What do you think?

it seems to me that it is the same as solving tsumegos playing randomly until you find the answer.

I don’t think that’s giving the game enough credit. You can’t analyze your way to a win like you can with tsumego.

The goal of practicing tsumegos and tesujis is better reading quality. That in order to figure out how to take advantage in a particular situation and, ultimately, win the game.

I think that since we have the option available for ranked games with analysis, i dont think it would be good or fair idea to take that option away from the people who want to play with those settings. For every possible combination of different settings there is always someone who prefers playing the game that way.

That being said, i think it would be good if the analysis would be off for ranked live and blitz games by default, and on for correspondence games as its traditionally a custom to analyse the heck out of corrs. If players want to play live/blitz with analysis or corrs without it, it would be easy to put that on/off with single click when setting up the challenge.

Why reinvent the wheel? Can’t we just do this, which takes 5 minutes for both backend and frontend to implement? 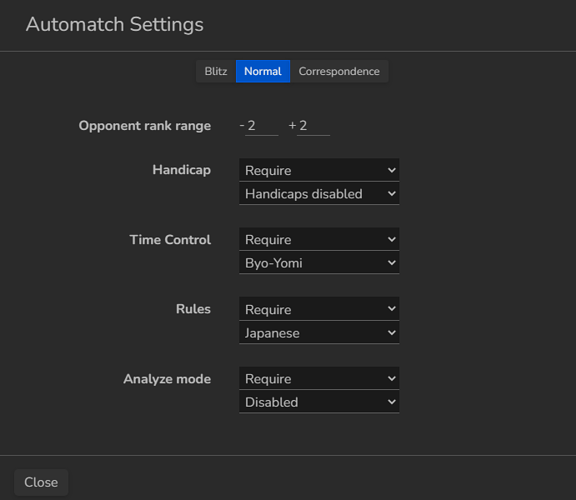 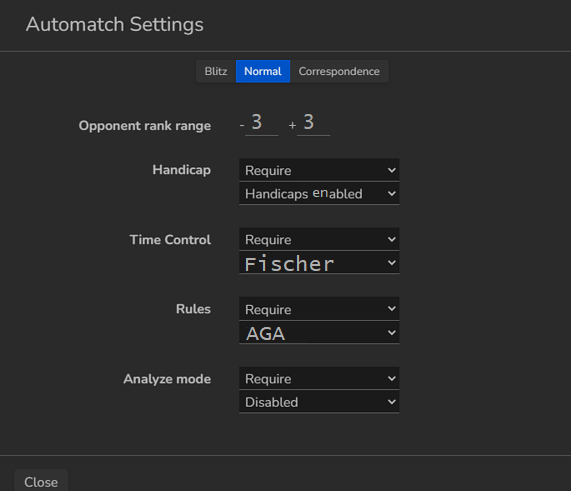 Why has this not been done yet?
So wait, for automatch live games, analysis is actually enabled when playing?
What is that? That is like cheating in a tournament. I’ve never seen it on my screen, only after the game is finished. Do some of my opponents actually have it on during live games?

Strongly agree. Considering how popular is this opinion, is there a reason why the dev team has not implemented it yet? The solution proposed by @esoka seems optimal. That way every body can chose the setting they prefer.

no, this is just game with different rules

yes, but there should be 3 choices

For ranked games, it should definately be off. I want to know how I stack up against other players, not other players+computer analysis. Life and death situations and capturing races are all part of how good you are. You can always replay the game in Kata or OGS and analyze it all you want after the game is over.

A tool that lets you avoid significant blunders in certain situations does make you significantly stronger than you actually are.

Since I now know that Analysis is on by default for live, I’m only playing custom ranked games where its off. I want to play against the actual strength of another players without computer aid.

its strange to use word “computer” when talking about just “analyze mode”. Some people have really bad imagination, analyze mode is way to feel like you have good imagination. Or are you arguing for ban for Paralympics?

just wrong, on kyu level at least
almost no one uses it to see as many variations as possible, most use it just to have no stress.
There may be 1min/move timer , but people do move in 1 second instead.
1-s people may start argue that using full 1 minute is cheating, lets force blitz for everyone

Analysis means that you can click on the board to explore variations. There is no “computer analysis”, it’s just like putting stones on a board.

Since I now know that Analysis is on by default for live, I’m only playing custom ranked games where its off.

Perfect. Custom games is working pretty well to get games.

For ranked games, it should definately be off

For corr. games it doesn’t make sense to turn it off, never mind whether rated games or not, as the players can re-lay it on a physical board, so it makes sense to leave it on per default.

I don’t understand how allowing you to play out variations in a fight does not make you significantly stronger. It takes away the ambiguity. You don’t need to play every possible variation. In most fights there are only a few that even make sense at all. Allowing this basically takes away the importance of reading since you can just play it out and that is a large part of how strong you actually are.

I’m giving analysis to lower ranked while not using it myself and winning
against higher ranked I use it and still losing
I’m convinced that analysis is less than 1 stone handicap help
real strength comes from correct intuition, not from looking at lot of variations
computers that looked at millions of variations failed at Go, but then artificial intuition “neural net” appeared, it is 5 dan at just 1 playouts