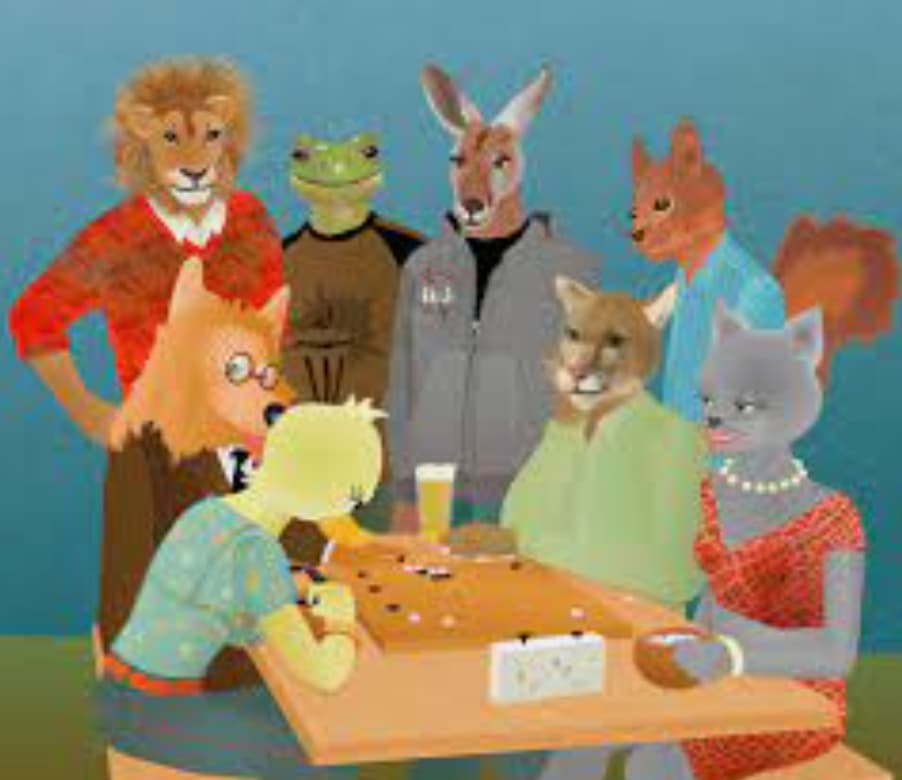 Things that definitely have to be fixed before deployment to the main site: Performance problem (I’m sending too much irrelevant stuff each turn, will bog down main server if it gets used a lot) Chat keeps disappearing Take players to game page when a live game starts (fix submitted) Review page updating like game page does (fix submitted) Things that might have to be fixed before deployment, or soon after: Malkovich chat visibility Green light status updates on player change (fix s…

topic drifted into a discussion about the psychology of rengo, as you can observe from the quotes underneath:

Now when you make a mistake you feel terrible not only for yourself but for the other person as well. And even more - you have to wonder whether what you played was a move they hate or not even if it is not obviously a mistake yet!!

A few years ago I played a Rengo (with handicap) as a 9k, the three other people being 1d+. My opponents tried to drive the game into complicated positions while my partner kept trying to repair my blunders…

if the stronger player in the team is interested in winning more than having fun with the weaker opponent. The psychological(*) problem for the weaker player is knowing whether this is true or not, especially in “randomly formed” teams.

(*): potential hypothetical psychological problem in the case where the weaker person is someone who cares about that sort of thing

Instead of going off topic I created this new topic where - if we wish - we can discuss the ins and outs of inter- and intra team psychology (and not forgetting the individual psychology of course).
Subjects that could be dealt with are:

I haven’t played many rengo online so far and I tend to place a lot less importance on online games so what I’m about to say is based on my experience in irl pair go tournaments. In these, I have always played with a stronger teammate.

The tournaments in Italy we always won without too many problems, being weaker than my teammate didn’t weigh too much on me even when I realized I was making mistakes because I saw that all the other women were weaker😅
(it’s a bit sexist reasoning, it doesn’t make sense to compare myself only with women)
In the international tournaments I did, however, it was different: we were always one of the weaker pairs and we lost often. My teammates didn’t have high expectations on me but I felt very guilty when we lost and I played a lot of ko threats during the games for fear of making a (worse than losing one ko threath) mistake.

So, I would say that how you feel also depends on the result and the opponents. For me (and I think not only for me) a defeat weighs more if I feel that I am making another person “suffer” as well. I usually don’t care about individual defeats, but if another person is involved I feel a bit guilty.

I have no experience of being the strongest player, but I imagine it is very difficult and sometimes frustrating. You have to try to play simple things because (usually) you can’t rely on the other person’s reading.

Actually I think the level doesn’t matter much because two players with the same level can have very different characteristics. For example, a 5k may know very well a lot of joseki that another 5k misses, or their reading ability may be very different. A team is stronger if the players have similar characteristics.

One thing I found very frustrating once was that my teammate was too slow and we would lose some games due to time. Pair go tournaments use absolute time. I usually play very fast. It shouldn’t have mattered to me. Hopefully I’ll become able to overlook these things.

I have never had a stable pair go partner. I have played 8 tournaments (I think) with 7 different teammates. Some of the best European pairs (e.g. Kovaleva - Surin, Cao - Fenech, Kralikova - Jadron, probably someone else as well) are steady and I guess having a stable pair go partner to train with is good to learn how the other plays, but I haven’t found anyone really interested yet.

It’s more about pair go than rengo in general, but at least it’s something

This seems to be the case in Europe indeed, as someone else pointed it to me in another thread, which really surprised me, as none of our tournaments in Argentina (not even pair go) are absolute time, so I kind of assumed that it was almost never used in any serious go setting

It is amazing how many “regional” customs we simply “take as the global normal way” until confronted with a different set of customs.

My experience with over the board rengo is that it can be really fun, although I never played enough games or seriously enough to give an answer about “serious competitive rengo” (most of my rengo games have been closer to “fun games in a bar”, for which rengo is great

I have been at times both the stronger and the weaker player in the pair.

As a clearly weaker player, it can be very educational to see the way in which a truly stronger player (if playing with patience and not getting “angry” at my moves :P) makes everything magically work. My impression in such games was as if I really did not understand what was going on, but some magical force made all my stones always become useful in later fights that I never expected when playing them. Sometimes I could see after a few moves that one of my moves had been a mistake, but was later in the game delighted by the way in which the stronger player used my earlier “mistake stone” to harass the opponent and exploit some aji, making it not totally useless even if somewhat bad, in ways that I would have never thought of.

As a clearly stronger player, I have experienced quite the opposite in what feels while playing like a very interesting challenge “on top” of the normal go game: if you put yourself in the mindset of “ok, my partner played this move. This is wrong and will not kill the opponent group, which will now live. However, how can I turn it into a useful move? If it does not kill, then what else does it actually DO?”. By thinking like this, you can often make moves that coordinate well with your partner moves, even when they are mistakes, “reducing” how much value they lose. For example, the non-killing move in the previous example might work to create some influence to use somewhere else, or might help in reducing another area by giving sente moves, etc. Often, making it so that many moves all work together towards a plan (say, create influence and use it) is better than changing plans semi-randomly because you don’t agree with your partner, even if “the plan itself” is not the best (say, it would have been better as a plan to kill or to fight immediately instead of settling for outward influence).

It is amazing how many “regional” customs we simply “take as the global normal way” until confronted with a different set of customs.

As a clearly weaker player, it can be very educational to see the way in which a truly stronger player (if playing with patience and not getting “angry” at my moves)

I can almost imagine a checkbox like “are you willing to be the stronger player?” in matchmaking… as some form of reassurance!

This seems to be the case in Europe indeed, as someone else pointed it to me in another thread

It was in this tthread:

In Rengo, do you talk with your team? General Go Discussion

While talking on rengo it’s interesting to think about time settings too . Most face to face rengo use absolute time, 30mn or 45mn by team is common. Time has been a kind of problem as it seems that more is generally used as usual or expected. Maybe because players are under more pressure or have to analyse the moves of their partners during their move time (not possible before like in a 1vs1 game). So absolute time could have earned preference as a cohercitive way against endless rengo. Wha…

Playing rengo is truly deeply fun and educational at the same time. and it is not always easy to join these two together in other activities. It push you out of yourself and introduce more distance with your moves. It let you go in different perspective.

Now i won’t play rengo all days and nights, i like to come back home in the cozyness of my way of playing.