It’s not intentional that anyone is able to, and it’s a miracle if it works

Okay, sorry. I didn’t mean to harp on this too much, but a glaring case just happened (I swear I didn’t 'do it on purpose!) and my first instinct was to report it again, but in reality the fault lies with those who misclick

I think some players might find it annoying though

I think some players might find it annoying though

I just clicked through the move history of an ongoing Rengo game on my mobile phone. The goban kept jumping up and down, depending on which direction I went. It was a bit annoying.

I’m assuming the reason is that players dropped out at those points in time, making the displayed list of players longer (or shorter).

Admittedly the game in question has an abnormal number of participants. But anyway I suggest to make the displayed list of players scrollable.

A current rengo game offer highlights a flaw in the system. It has an autostart of 6, with 5 signed up. Clicking VIew confirms that only one more sign-up is needed for the game to start. However, two sign-ups have withdrawn. This means that the game will start with 4 players instead of the intended 6. Presumably, if the other three players drop out now, then the game would start with 1 sign-up and no opponents. (Space for a witticism here.)

Clearly this should be fixed, so that a withdrawal reduces the number of sign-ups recognized by the system.

Which challenge are you referring to?

What you describe should not be the case, in two ways.

I can see three auto-start=6 challenges right now (3 minutes after your post), none of them appear to meet this description.

What leads us to think that this would happen?

Since the game offers have no numbers, the only way to identify is by the organizer (or one can look at the list), which I didn’t want to do. But since you have asked, it is the game organized by Joachim Schmidt.

What leads me to think this will happen is that the View says the game will start when 1 more person joins, even though that would give the game 4 instead of 6. Only three players are listed, with two dashes apparently representing the withdrawn players.

Links to challenges are right up there on the todo list

Joachim’s looks fine to me: 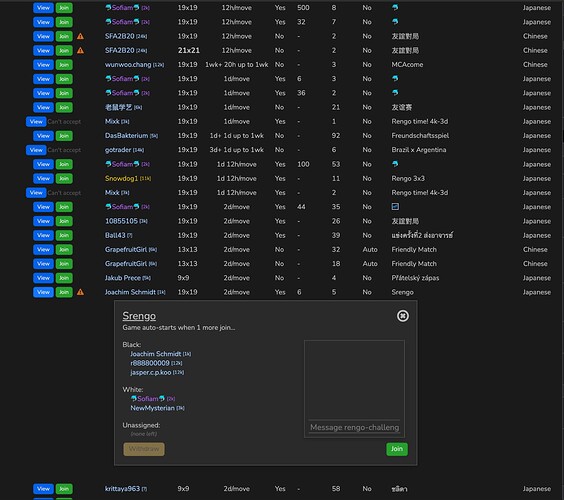 In Joachim Schmidt I see 5 players, autostart when 1 more joins. 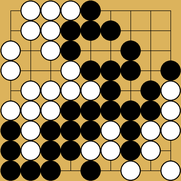 Before lyzz66666’s timeout I was the active player in the white team. I am sure of that. This bug should have been fixed and I couldn’t reproduce it (I tried yesterday), but it happened. It’s the same game where players resigned twice

Yes, it is correct now, because the dashes among the Black players have been replaced by player names. This wasn’t so before, otherwise I wouldn’t have wasted my time reporting it.

Out of curiosity, today I tested a rengo setting

The auto-start can be set to negative number, and the game will immediate start after just one player joins, effectively make it an 1 v 1 game.

Whoa, how did you beat Sofiam to finding that one

Tenuki is always an option. Keep an inquisitive mind, and thinking outside the box.

Before lyzz66666’s timeout I was the active player in the white team. I am sure of that.

I’m not ignoring this, but I’m waiting for a better chance to reproduce.

The same with Gia’s: I haven’t been able to make that happen (though I don’t doubt that it does).

I’m not ignoring this, but I’m waiting for a better chance to reproduce.

Uh, I was about to say “don’t worry, it’s just one game” but I just noticed that it happened also here.
Windey resigned twice and is still playing. Maybe it’s about the number of players?

Rats rats rats eh. I’l start smashing resignations in test, maybe you can too, and see if we can find a way to make it happen while I am watching…

I’m not very confident because I already tried some games on beta yesterday, but I’ll try some more

With 12 hours it’s hard to test timeouts’ effect and in live games they don’t do anything.
What else could I be missing?

Edit: For now I’m of the opinion that I can’t do it, sorry

Is it normal that player cards are not updated immediately when a player is eliminated? This is now the case but I seem to remember something different

I found another game where this happened: ispookmykids on dsadasdasdasd.
This game I believe started with 269 players. In this one (256) everyone seemed to be correctly eliminated, but there were not many players who resigned.
I don’t know if it’s a coincidence but so far I’ve only seen this in the biggest games I know of.
I’m not going to start creating 300 accounts in the beta server to see if they are related