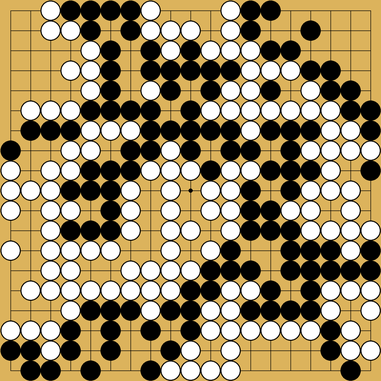 This game took 4 months and change. Obviously my opponent has improved much more than me, but other than the usual pointers that I always ask for and welcome, I wonder if the overall progression of the game over time also holds any useful clues.

We can see (7) as an experiment. After White kicks, though, don’t connect – that’s overconcentrated. The better move is to descend to F18, provoking more aji in the corner. When you play away instead, as in the game, White can just hane underneath and be satisfied with having compromised the shape of your stones.

Even after the exchanges, (18) R5 is good style, otherwise White may play there himself and expose the defect in your shape.

On (21) I’d probably invade the 3-3. As it is, after White kicks you should still stand, or else lose all aji in the corner after White F3 (which he didn’t play…)

A meagre review but all I have time for for now. Someone else will do a better job :D

I really like move 7. It makes a lot of influence, guarantees center access, and makes the opponent abandon their plans and spend moves breaking up that bigger area. You do need to descend to F18 when kicked, however. Instead of that, you played around where the opponent might have played to break it up. This was a smart idea, but getting the local tactics right was more important.

This matches my earlier impressions of your play, @Gia You’re really sharp and plan about as well as anyone (call these “soft skills”—the mental aspect of Go). But soft skills aren’t enough. You need “hard skills” too. Hard skills tell you to increase your liberties when smothered (see move 9), hane in response to attachment (see move 13), poke your opponent’s weaknesses (see move 15), stand up when a single stone is kicked (see move 23), and so on.

The good news is that hard skills are easier to learn than soft skills. There’s so many resources for learning them. The Japanese term to search for is “honte.” In English, it might be called “fundamentals.” Not sure about Greek. But that’s where I’d start. In Go, as in most professions and hobbies, learning what the rules are (how you “should” do things) is necessary before you can break those rules intelligently.

Yeah, connect yourself and keep your groups strong, while disconnecting opponent. 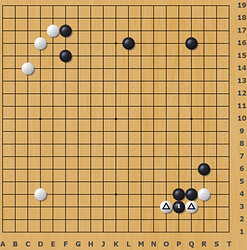 Like this, black separated square stones, which are weak now and can be attacked. So it’s important for black to keep cutting stones alive and strong. 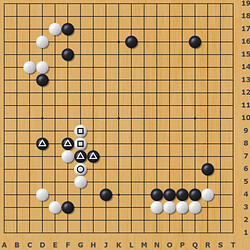 Since the right side two stones feel more lively, you could think of enforcing left side. 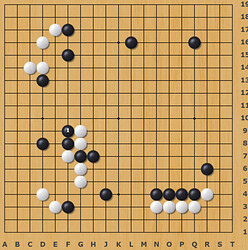 In the game you got cut instead. 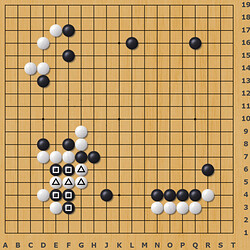 Here you also could’ve tried and saved your stones. 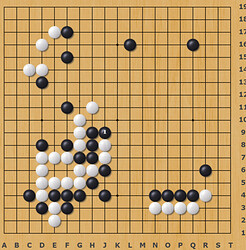 So yeah, I think you need to cut and don’t get cut.

Also, sides are bigger than center so try to fight for sides more.

I played at F3, you mean W would have played there?

@mark5000 I’m trying to get more structured in my studies, but I’m not good student material

(I’m trying Jeth’s book slowly, watching pro games and dwyrin lectures (he’s the only one that does basics - I love Yeonwoo but she’s more advanced - and is engaging to watch). I lurk at Go conversations in the forums and try to increase my play count.
I can see just playing can only take me so far.

About F18: I see both you @bugcat suggest F18 and so does AI. But why? My thinking was “create a link between those two groups, make a strong thing there, if W comes first in the L16 area it will cut me in two”.

My guess is F17 has 4 liberties, after E17 it has 3 liberties, so if I’m planning to do something with it I need to attach a stone to it to increase the overall liberty count of the now 2-stone group. But if it’s not that, I can’t imagine at all, it seems beyond what I can see.

About F18: The most efficient way to start to surround parts of the board is by building straight walls, and that’s exactly what F18 does together with the F17 and F15 stones. If White gets to play F18 instead, you’ll have to answer with G17 and your potential area up top is undercut.

Or L16 shouldn’t even be an option?

(Sorry for the ELI5, not one of my best days)

L16 is not an option I would consider at this point.

Most of Nick Sibicky’s lectures are quite accessible, since they are intended for DDKs, however I think there are a few SDKs in the audience. For instance this lecture about shapes Nick Sibicky Go Lecture #88 - How to Make Better Shape - YouTube starts with very basic (beginner level) ideas, and some parts of the lecture are of interest for people around 10k or a bit stronger.

Now I don’t know if you find him as engaging to watch as Dwyrin, it’s a matter of taste. FWIW when I was about 10k I spent some time watching Nick Sibicky but couldn’t stand Dwyrin.

I find Dwyrin’s latest videos engaging, but imho it was a long way for him to get there, his earlier videos I don’t like much (not his Go skills or presentation, rather his jokes and general vibes). I think he has gotten lots of feedback and taken it into account over the years.

On the other hand, while I like Nick’s earlier videos, I don’t like the later ones. Again, not about Go, the way he interacts with the camera.

But that’s just my personal taste, indeed, and if I manage to catch a Gonewbiefish I will probably recommend both of them, along with some of the other good ones.

He talks TOO much

Which one of the two?

When a nerdy kid tries to be funny and popular, that’s when things go wrong.

He streams, so he has to be engaging. Again, my personal opinion, but I think most people would find a laconic relay of a game a snooze.

I think when the nerdy kid tries to be funny the way popular kids are funny is when things go wrong. When we all align with our personal brand of humour the results are usually better.

you agree with me. that’s how I read your post.

I don’t think he talks too much, but I do think the harmony between a person and their fun side is a work in progress

When a nerdy kid tries to be funny and popular, that’s when things go wrong.

One thing’s for sure; For a go streamer, Dwyrin is very popular.

I will take your words for it, but being popular among nerdy kids does not make him a popular kid.

The Paul bros are popular kids and I wouldn’t touch them with a 10-meter pole made entirely of disinfectant.