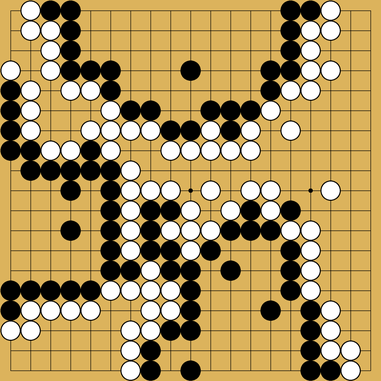 I think both players made direction of play errors in this game, and I was just lucky my opponent did it last, allowing me to narrowly win.

So I’m particularly interested in direction of play feedback (and since there wasn’t any fighting, that’s maybe the only feedback there can be!?).

I think the game was over after that.

I reviewed this and I was a bit surprised by your joseki choice in the upper right.

You also might want to take notice on the number of slow moves made by both sides.

Move 68 was definitely slow, but move 73 didn’t seem bad. It was rather when b responded to some of your slow moves (doesn’t underrdstand sente) that he lost.

Thanks - heaps of good things for me to think about in there. I’m sad that I’m chosing slow moves, because I’ve been consciously trying to chose “the big one” but glad to have such a definite thing to work on

In my original post, I wrote “Move 5”, but that was brain fade, it was Move 14 that I was asking about. You didn’t call it out so I guess it was OK. I think mostly I was wondering whether N14 was better to do first.

(About Y U no hane: at that point I thought the game was over - I was apparently up by 10-15, and that sequence of extend instead of hanes was all conditional moves: with sente, I could predict what came next and churn through them. I guess I would have been very sad if it turned out I did not have that margin afterall 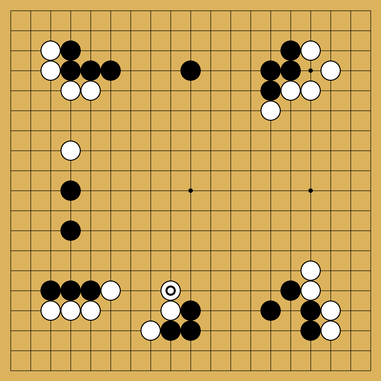 I couldn’t find any mistakes. You slacked off a bit in the endgame, but you were far ahead going into the endgame so it didn’t really make a difference. I’d say you’re on the right track.

Thanks. Both you and mekriff advised me that the centre is not big, but the 2nd line plays are.

I need help seeing that.

I thought that the monkey jump was “only” 8 points in gote, wheras there seemed to be quite a lot of space in the centre at that time. Especially if he had haned at H13 or J13. I played there to stop that moyo growth.

Each of the opportunities to hane around at the 2nd line looked like they would be worth only a few points and gote (actually, except the bottom left where I didn’t spot that there was an atari that made it huge. I think me and my opponent both did not see that).

In the absence of that, what makes the 2nd line hane more precious than staking out the centre?

In the absence of that, what makes the 2nd line hane more precious than staking out the centre?

Generally the answer is the value of power and influence. The center generally doesn’t make a lot of territory (since it is easily reduced), but a lot of the moves you made can increase power and expand your sphere of influence. Since there was nothing you could really attack in the center, power was more or less useless and the territory that could be made on the sides was more important.

@mekriff’s last sentence is pretty much my thought too. The center can be really valuable in some cases, but in your game Black had four stones poking into the center which made playing there pretty much dame. By contrast, second-line moves are kind of first-order endgame moves (minimum 8 points, or 4 points in double sente).

In terms of endgame, why didn’t you push under on the first line? (i.e. a4, q1). They’re usually 4 points in sente, so I’d have taken all of them instead of playing gote. There were three of them, so that would’ve been an extra 12 points of endgame.

Q1 was an oversight - if I’d seen it was sente and so big I would have done it.

In the other cases (eg a5) I thought that the hane was gote for white. At that time in the game, I felt that I had won but my opponent was not going to resign, so I played all the end-game sente moves that I could do in one conditional-move batch to get them over with. I extended instead of hane because it was definitely sente, so I could carry on the conditional move sequence.

They’re usually 4 points in sente, so I’d have taken all of them instead of playing gote.

Can you actually do that? That’s an interesting endgame indeed, and a good time to rethink the meaning of sente. Take a look at this page:
https://senseis.xmp.net/?MutualDamage

I played all the end-game sente moves that I could do in one conditional-move batch to get them over with.

Except that you stopped in the middle to play gote moves in the center, and let your opponent play all the first line yose in sente

Your B4 seems like a reasonable choice to me… knowing that you would follow up with A5!

As for the direction of play, I think F15 was a big move, and white could have played in this area first in sente.

Actually, I am having a big think about “when is it end game”, because while I was playing moves in the centre, I was not thinking “end game” I was thinking “fighting for the last territory before end game”, but all reviewers here have referred to the centre plays as end-game, competing in priority for those hanes.

Apart from Q1, I’m still not clear on the maths of this, and need to look in real detail: I think I mentioned, I thought that H13 was big at stopping his moyo growth and claiming more in the centre, but it’s been described as “slow, and less important than stopping 8 points of monkey jump”.

But once I was thinking endgame then I did all the 2nd line extends that I could in a sequence in conditional move: I think three played out all in one exchange.

I think you can get away with it, in this case, since the C19 an Q1 hanes from black aren’t that threatening, whereas all of the hanes against black threaten severe reductions. If white plays A5, and black goes for mutual damage, white can just invade since black can’t reduce white by more than about 6 points.

It’s a cool concept, though, and one I’ll definitely be adding to my Go arsenal. I always just think of the first line hanes as sente and play them

All reviewers here have referred to the centre plays as end-game, competing in priority for those hanes.

It’s about move values. Sure, the center was the last “open area.” But it was pretty much dame because either player would need 4 or 5 free moves to make about 15 points there. Endgame moves were simply bigger, so you can consider you are in the endgame at that point.

The endgame is the final stage of the game when the life & death status of all big groups has been determined and the remaining moves aim at expansion of own territory and reduction of the territory of the opponent.

In your game, I’d say that the endgame started around move 69, after black protected the upper territory from a white invasion.

I think you can get away with it, in this case

I think you’re right, and those moves are white’s privilege. Funny that in the game it’s black who took all those points. White could have countered with mutual damage.

I’d love to see some variations making the points that you are making, if anyone was willing.

I’m reading the words, but I’m not sure they are sinking in…

I am having a big think about “when is it end game”,

Yeah, I had the wrong idea about that. I thought end-game was later, when really only small points are available.

@GreenAsJade did you check out the link to mutual damage?

I did check it out, and understood it, but was distracted by the fact that the examples were facing the opposite edge of the board, not enemy stones as in the game.

And now at last the light has gone on for me…

So silly - I simply had not seen how those second line hanes are sente, but they obviously are.

Simple as that, doh!

Thanks for your patience, and review input!