Well, I don’t think we have to rush into complications.

yebellz, if we (black) play C16, am I right to assume you would try to collide there?

I’m playing C16, since I think that makes for best shape. I hope that no one collides there.

If I back off and let C16 be solely black, then my shape is ruined.

If black backs off and let’s C16 be solely white, then it’s not too bad since black gets to play elsewhere.

I don’t think we have to rush into complications.

then it’s not too bad since black gets to play elsewhere.

The same argument works for White: if C16 is solidly White, Black cannot connect the outside stones to stuff in the corner, it’s evidently good for White.

I don’t see why @Jon_Ko isn’t convinced of playing C16?

If Vsotvep plays P16* and Feijoa plays R15*, maybe I should play Q16? Seems like a “boring” but still sort of urgent/solid move?

These have both been played already, I was planning on playing O16 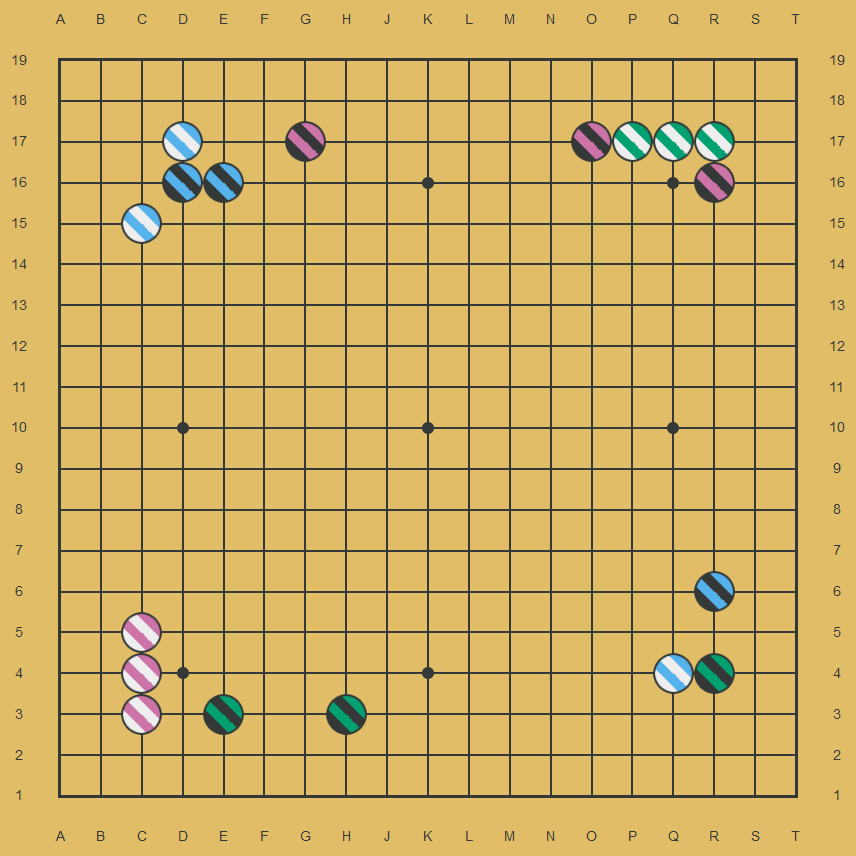 This is the current position

Ah I just completely bungled the coordinates I meant to type

If you play O16, then Q16 definitely doesn’t make sense.

I don’t think I said P16 before. I prefer O16 over P16 because P17 is already there, it feels like a bump, to which one extends.

Huh, you did say O16. My bad lol. So I suppose the plan is to sacrifice your R16 stone and leave the corner to white?

I have no real plan, but R16 is fine for now, I want to develop the top. Feel free to reinforce R16, Black | Green can probably do more against White | Green anyways.

I’m black-blue. Definitely not sure where to play in that corner anyway. Maybe I’ll try something like O4 instead

Oh! Now I see my confusion with @Jon_Ko, I thought they were Black | Blue!

In that case, I suggest you play C16, and @Jon_Ko plays elsewhere

yebellz is going to play C16. Are we sure we want a black+white+blue stone there?

I’m not sure of anything, but that Black+White+Blue seems better than only White+Blue, doesn’t it? 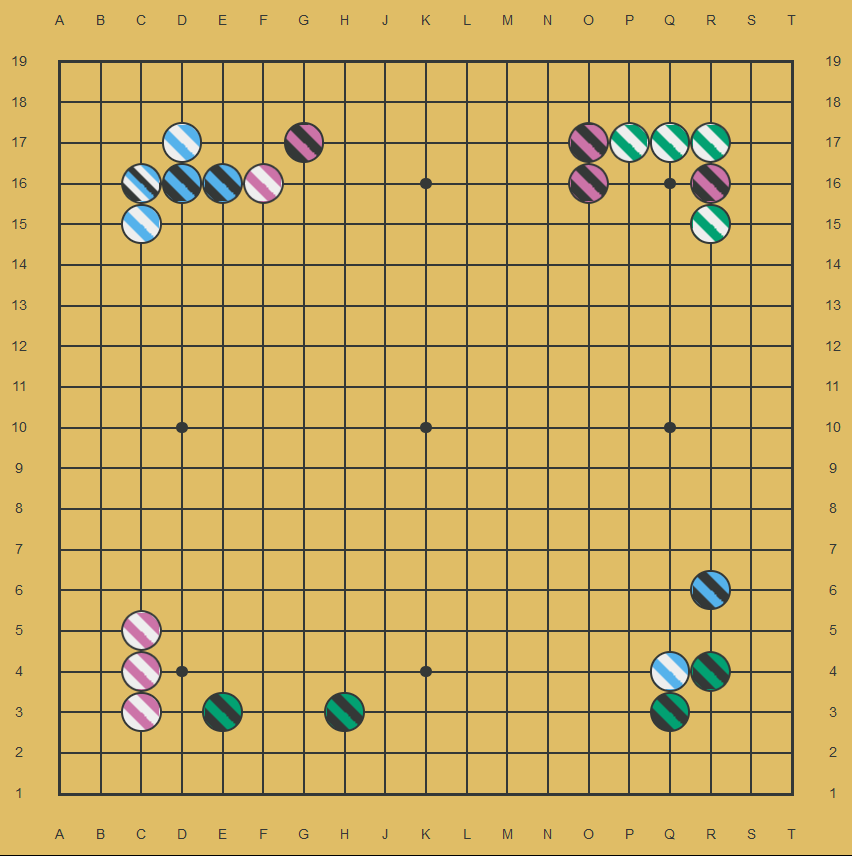 We have our first collision, and with it the first three-coloured stone in history

If the black chain at D16 loses all of its liberties, I assume D16/E16 will be removed from the board, but what about C16? Will it be removed or just lose its shade of black and turn into a blue/white stone?

Unrelatedy, is it allowed to collide with a pre-existing stone?

Those three stones form a Black chain. It just happens to be overlapping with a White chain formed by the three stones D17, C16, and C15. All five of the stones mentioned also form a light blue chain.

My understanding of the rules is that a chain of any color running out of liberties is captured. So, if the three Black stone chain has no liberties, all three of those stones are removed.

I don’t think it is possible to collide with an existing stone.

Yes, I confirm yebellz understanding of the rules.