Hello everybody, I’m new in the site and to the game as well -so what I’m proposing might just be insane- but I had this idea about creating a language based on the game of Go and I was wondering whether it’s feasable and whether somebody else has already thought about it. The general idea is to keep the rules of the game, but without actually playing, rather letting the other player express himself. It would be about cooperation rather than competition. I thought about some concepts that might be codified, like the two first moves of each player in the angles might be the player’s “homes”, where he could start to express himself. Depending on which angle the player starts from, his disposition towards the other player might be inferred (i.e. starting on the left upper angle might be a sign of openness, if that move is codified this way). Asking a question might be moving in a dangerous position, so that if the other player doesn’t want to answer he’s able to express this negation by defending his position in a threatening way, maybe because he’s already expressing a concept and he’s asking his “opponent” to wait. If he wants to express it, instead, he could make a move which is unfavourable to the safety of his form. These are just very general ideas, and I’m concerned about what could be expressed by such a language (can it be a conceptual language? or maybe an emotional one? or what else?). Of course you would initially have to find an arbitrary meaning to some forms or moves, since every language starts from an arbitrary agreement on some basic expressions.

So to me this looked like the right place to ask. Do you think it’s possible or am I just nuts? 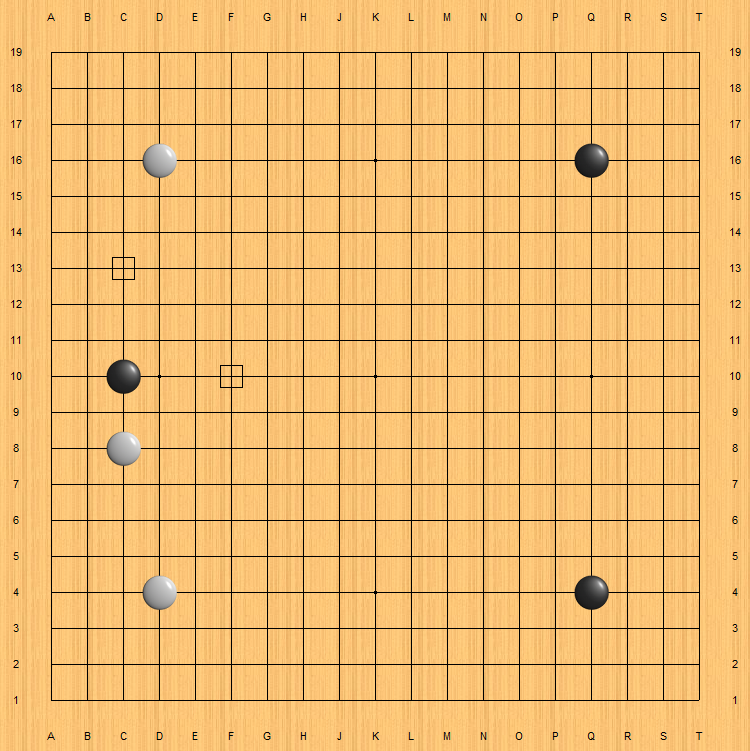 Black would then choose between the two squares as to whether he wanted to move towards or away from the centre and, thus, what message he wanted to express.

so… If you’re thinking about a language, there are a few places you have to start:

Now, there’s a lot more when it comes to making a language, and I’ve thought of using a go-based language altogether once, but not so much with an actual board to express, but rather symbols and meanings derived from a go-heavy culture.

Now, a language can certainly be done, but it generally means a lot of work not just to make it, but to learn and teach it, and on a go board it might not feel right to apply a relatively rigid structure like language to such a thing.

But you could alternatively start small with things already on the board, a small set of moves that denote a certain way of feeling within a group of people you play with often, maybe a joseki choice that you don’t usually make denotes anger, or hopefulness, or something like that, and it might evolve into something resembling a language, or at least a proper “hand talk” like people keep talking about.

Anyway, it depends entirely how much work you wanna put in, and how close to an actual language you wanna get

Thanks everybody for the kind replies (especially to mekriff_telpelote who was so detailed). As I said, I’m new to the game, so I haven’t thought about it too much, let’s say I just fancied about it. Anyway bugcat’s idea for a greeting is close to what I was thinking, so that’s why I wasn’t sure about the possibility of expressing complex concepts, but rather emotional attitudes. So this sort of answers mekriff’s first question. As for the other questions:
2. I had thought about an independent language, so that once learned it doesn’t need any auxiliary form of communication.
3. I would say that the initial moves would already “set the tone”. Starting from them, I think the morphemes would be particular moves, whose meaning might even depend on the section where they’re played.
4. I don’t know how complicated it could get, but I definitely thought about some kind of grammar.
5. It’s a problem, even due to the fact that, as I said, I don’t even know what kind of thoughts (emotional, logical, conceptual) would fit in such a language. Whether by the end of the game the conversation would be concluded is another problem.

Anyway, thanks again everybody, you were all very helpful!

mkay, so each move being a morpheme after the initial play means that at any time there’s only a choice of 361 morphemes maximum, and a lot of those are going to be very bad ideas for an actual game, meaning there’s likely to be a choice from over 10-20 morphemes that correspond to a “normal” move on the average move, with only a few at certain more delicate situations (which is fine, redundancies in communication is a notable part of language, and especially important here since I doubt either player is gonna wanna keep a record of past moves to hold onto the conversation.

This is still doable, although maybe might feel a bit restrictive. The real issues with this kind of setup are two:

Also, not listed is the fact that while a go game can often be 200-300 moves long… it might be considered quite short for a conversation, note how the first paragraph in this response is ~140 morphemes long (rough count), which means that the total in this comment is likely more verbose than both sides of a go game can use in this system. Meaning to have a truly interesting conversation, you’d probably have to go over several games.

and as per your response on the “not needing” any auxiliary form of communication, most languages are like that to an extent – you don’t need to be able to speak english to write and read it, it just helps most of the time because you can associate the two systems (written and spoken) in your head, which can make learning easier via redundancy.

But from what I’m seeing so far, it’s either not going to say much in general, or it’s going to be very hard to learn and communicate with (I’d argue even harder than the game itself)

Although it is an interesting idea, if you get some of the core rules ready to go and are ready to sink plenty of time into this, I’d be happy to help flesh this idea out.

Your two points actually pose some interesting problems, the first in particular, to which I wouldn’t know how to answer. As for the second point, I suggest that this language be a simplified one (if it’s going to be a conceptual language), so that the number of morphemes would be reduced to a minimum to express a maximum of significance. It would have to be a very dense structure, used to communicate only what is meaningful.
In fact the idea came to me fantasizing of an encounter with someone who speaks another language (or no language at all), but knows Go. If this person can only externalize his thoughts by playing, so to say, he’ll develop a way to express concisely what he means to say, depending on what he wants to express. Example: you find him starving in a forest and start to play Go with him (for what else would you do to help a starving man?), of course in this case his first thought will be “hunger” or “food”. He could express this by constructing a solid position in an angle and then placing a stone in one of his two eyes, filling the symbolic void in a suicidal way to express the urgency of his need. Of course in this case, let alone the implausibility of someone casually wandering in a forest with his goban to play with random starving men, you might say that this takes too many moves to be concise, but I think it could be perfected. After the “hunger” morpheme is codified, as time passes he’ll need less stones to express it, since the embryonic form of it will be sufficient.

Or, to follow your example, you say there are 140 morphemes in your first paragraph, but we’re talking of a complex grammatical structure, which presents many elements that we could do without in a Go language. So, in the first sentence “each move being a morpheme” presents two concepts in a relation: therefore “each move=morpheme”. We can do without the “each”, since the word alone already expresses universality, and we’re left with “move=morpheme”. If we decide that the subject always goes first and the predicate is always second, we don’t need the “=”. Therefore “move morpheme”. Of course in a goban this would have to find its own translation.

But from what I’m seeing so far, it’s either not going to say much in general, or it’s going to be very hard to learn and communicate with (I’d argue even harder than the game itself)

Maybe you’re right, so this is why I think that the first problem to solve is what is to be expressed and whether there’s got to be a limited set of basic concepts.

Although it is an interesting idea, if you get some of the core rules ready to go and are ready to sink plenty of time into this, I’d be happy to help flesh this idea out.

Thank you, I’ll definitely keep thinking about this and if I do come up with some valid ideas I’ll share them here. Of course, if you or anybody else have something to propose I’d be more than happy to work on it with other people.

Think of how many starving people we’ll save. If they know how to play.