How important is it to place a stone with the index and middle finger, is it compulsory in competition or just a traditional thing

Besides culture and tradition, the main reason is to hide as less as possible the goboard to your opponent.
I don’t think it’s something compulsory at all anywhere.

Certainly not compulsory, I believe it is just the easiest technique to place a stone without disturbing its neighbours.

Plus it looks super cool

It is not compulsory in any event I’ve been so far.

To me, once you get used to it, it is the most comfortable / easiest way, more so than “thumb + index” which I think is the first that we all try naturally (because we use thumb + fingers everyday for almost everything else). I often find that also apart from go, it is sometimes easier to grab/put small things that way in constrained spaces, like reaching for something small at the end of a narrow bag / drawer.

When you inadvertently pick up and put down small things (candies, coins, piece of rubber, a pen, etc) using your index and middle fingers.

I’m still awkward using index-and-middle-finger placement, but I practice it in all my IRL games. I agree that it is definitely a better means of placement, especially on a crowded board.

So subsequent question, what happens in a tournament if you inadvertently drop your stone and disturb a crowded goban? (Or if you hit too strongly the board, inspired by some famous manga, and produce a similar cataclysm?)

[Poll] How go should be advertised?

Meh, it’s not important at all. It’s really just an optional, stylistic flourish, like how some fancy people use a fork and knife while eating, instead of just tearing apart their food and shoving it in their mouth with their bare hands.

I don’t know. I suppose if the board could not be restored, I would forfeit the game. Not the end of the world. It’s only a game.

So subsequent question, what happens in a tournament if you inadvertently drop your stone and disturb a crowded goban? (Or if you hit too strongly the board, inspired by some famous manga, and produce a similar cataclysm?)

This I’ve encountered before in my past tournaments (but it was a long time ago). IIRC, if the disturbance is just minor and can still return to the original state easily, the opponent can call a judge and give you a warning, where repeat offenders can get disqualified (however, most of the time we would just resume it, if both agree it was just an accident). There are many types of warnings, like slide a stone, touch a stone on the board and pick it back up, (sort of like a missclick), or even talk maliciously, etc. And if the board state is unchanged and a warning is given, the stone has to be placed on the board at the first contact point.

However, if the original position cannot be returned to before the incident happened, it would usually count as an immediate loss. (and if it is malicious, will get disqualified as well)

That depends on the Tournament Rules of whichever tournament you are playing. If it is a friendly game, of course you just do whatever you want

Our Tournament Rules in Argentina and the Chinese Tournament Rules that I’ve read both treat it in a similar way to what claire_yang describes: if the position can be restored by the referee or by mutual agreement between players, then the game carries on. If it is impossible to restore and continue the game, and there is a clear “disturber” of the board like in your example, then that players loses.

I’m trying to remember if backgammon players use index-thumb or index-middle.
(I mean the “real” one, not the sport

)
It looks like the technique for Go is mainly to avoid disturbing precariously placed stones. They are round and easy to move and jiggle, unlike the flat chess pieces or the flat backgamon pieces or the majority of pawn pieces used for board games, which are mainly flat at the bottom.
Also, it is an elegant way to avoid blatant sleight of hand on a board where the pieces are identical. 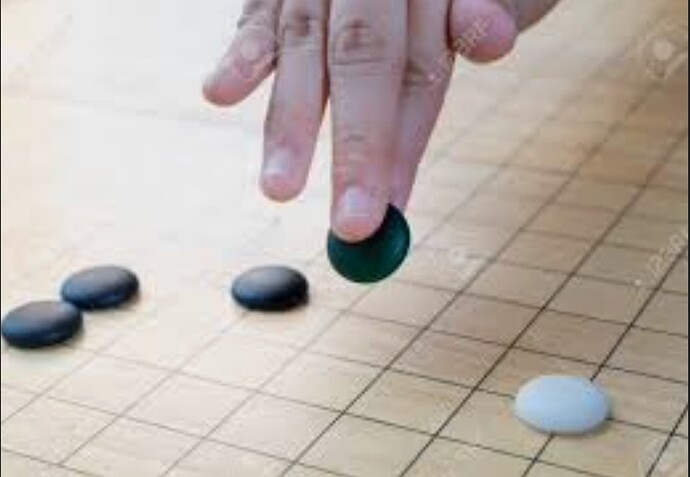 This little finger up is still a choice to take.

Will people forget about this if we all play online in the future?

No idea. Will we have internet in the future?

Surely it will still be relevant in the metaverse.

Will people forget about this if we all play online in the future?

Probably. People will have to invent new rules for future life.
I can’t imagine how it will be because I’m the person who thinks with pen and paper, but I guess digital youth will have no problem clicking instead of “placing”.

@teapoweredrobot
That’s a good point, but I wonder. I think for several years to come the technology of metaverses will focus on online presence and economy, less on simulation.

People will continue to play IRL as long as our masters do not permanently confine us to our homes. As for the permanency of the Internet, It will last until our next Carrington event (we narrowly dodged one a few years ago), or until nuclear EMP ends it.