The weaker player has HP to start the game. Instead of moving, the stronger player can declare that the game will end within x moves and write that declaration down in a notebook available for reference to both players, along with the current move number and the amount of hp that will be eliminated from that guess if right.

In order to calculate how much hp will be reduced by if and only if the game ends on or before the move predicted by the stronger player (the stronger player may be right in some predictions and wrong in others; they simply eliminate HP for the ones they were correct on, with no additional penalty or benefit from those they got wrong), take the difference between the current move (the move on which the prediction is made) (that move still counts as a move and not technically a pass, it’s just not on the board) and the move before which the game is predicted to end. If this number is smaller than the current move number, square it, divide by 1000 (or some other pre-agreed-upon constant; it doesn’t matter as long as you scale the initial HP accordingly), and that is how much HP (including fractional digits) will be taken off the weaker player if the game ends on or before the stronger player’s prediction. If the difference between the move on which the prediction was made and the predicted on-or-before end point is greater than the current move number, just square the current move number as before and divide by 1000 (as before).

The game is resumed according to the rules of whatever ruleset the players are using, and there are no more passes for HP reduction (though players may pass to resume counting normally), nor do the additional moves count towards extending the game beyond the stronger player’s predictions.

The stronger player wins if and only if all of the following are true:

If the stronger player fails to meet any of these conditions, the weaker player wins.

These rules are meant to encourage HP reduction during the midgame, when it will likely be most exciting to see.

But, what if komi is decided only after first 4 moves are made?
Then any move is ok!
You can choose to become 2-7 master for example. And 4-4 master will have no experience what to do against you, komi no longer will be on his side.
Everyone will have to expect anything and train everything.

Asking again whether anyone would be interested in forming a group for this.

I interpreted komi is decided as komi bidding, rather than evaluating with a bot; but I think stone_defender might have meant the latter. 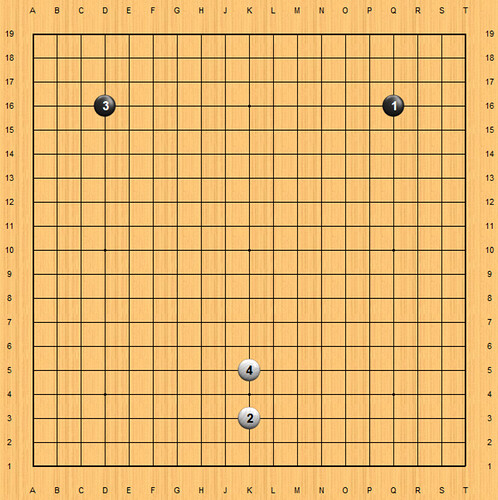 eg. suppose I played this as White.

ideally komi should be decided by bot, so estimated score difference is as close as possible to 0
komi bidding may be used when such bot is not available

I prefer komi bidding, but there’s no reason why the group couldn’t include both approaches.

Have you thought of a name for the variant?

idk about name
Opening Freedom? (or how to correctly say that in English?)

but you have to play your own stones, so only komi should be decided, colors shouldn’t be switched
Or you wouldn’t be able to become “2-7 Master”

Or you mean change color of same stones?

This is my idea:

In that idea, how about Seki Go?

Doesn’t start with an E.

game is a null result

I think I would find it hard to motivate to avoid a null result. So why not: points are only scored for winning ko fights? One point if you win the ko… it would be even more chaotic though

I saw some posts earlier about card driven Go, I didn’t know this existed already. I’ve been wondering if it might be possible to teach haengma to beginners: each card has some haengma on it and you must play some number of N cards per M moves (other moves are free) so must learn to use the haengma? The trouble I run into is how to deal a hand of cards and reshuffle etc

It would be cool to have “oh no I want to play a knights move but don’t have the card” situation, but that’s a specific experience. Maybe some open hand with drafting system if you want more normal Go? ie you can somehow manage the cards available to plan ahead

So why not: points are only scored for winning ko fights? One point if you win the ko… it would be even more chaotic though

What’s the point of having a ko, if both players only get points by filling the ko?

points count ONLY if they are seki?

yeah good point, I didn’t think it through. I just don’t like null results as game design, it’s not motivating. Maybe normal score plus extra points for ko?

Don’t forget that if you’re losing in score on the board and there hasn’t been a ko, you just don’t play any kos and get a null result instead of a loss

If you’re losing just start passing if there’s been no ko, that or always connect any potential kos or just give up the groups/stones

But yeah I agree no result is not very motivating

What if you extend the normal ko rule, saying that you are not allowed to fill on your next move after capturing a ko? (Or more specifically, all points disallowed only due to ko/repetition are also disallowed for the other side on the next move.) Seems like that would strongly encourage fights.

Alternative to komi:
(no komi, perfect equality)
there is delay before first move during which no one can do move.
and then timer activates. There is 1 timer of both players.
Black doesn’t play first. Who clicks first plays first. It may be black or white. (Then other player do move)
then delay again
and …who clicks first plays first
and so on
it is Simultaneous Moves Go in some sense but without new Go mechanics. If first pair is [b move, w move], second pair is [w move, b move] , it just works like b move, w move, b pass, w move, b move.
it may be more effective to move first but if you had no time to think it may be worse.
So it also realtime strategy with arcade elements in some sense

(this is my bit. there are many funnier, but this one is mine.)

What if…captured stones were removed at the end of the next player’s turn? This would make the basic ko rule implicit, so there would be no need to remember the last move. You just wouldn’t get to play on your own dying stone:

This eliminates the unfairness of having to pick up captures while your clock is ticking, and it seems more polite and sanitary, since you never touch your opponent’s stones.

An interesting consequence would be that you wouldn’t get to play a snapback immediately: 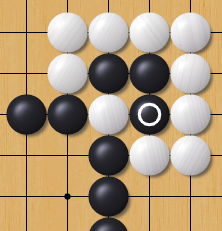 In the position above, White would need to play a sente move elsewhere before returning to kill the three black stones. If there is no large enough threat, Black would live. In fact, many normally dead groups might actually be alive in the absence of big ko threats.

A rule I thought would be good is for players to take 2 moves per turn. With 1 (maybe more) special stones that each player has that the opponent is not allowed to be within 2 liberties from.