I was playing a game yesterday that ended in a way I had only ever dreamed about. My group in the lower left is dead, even though it has (Edit: appears to have) two eyes! 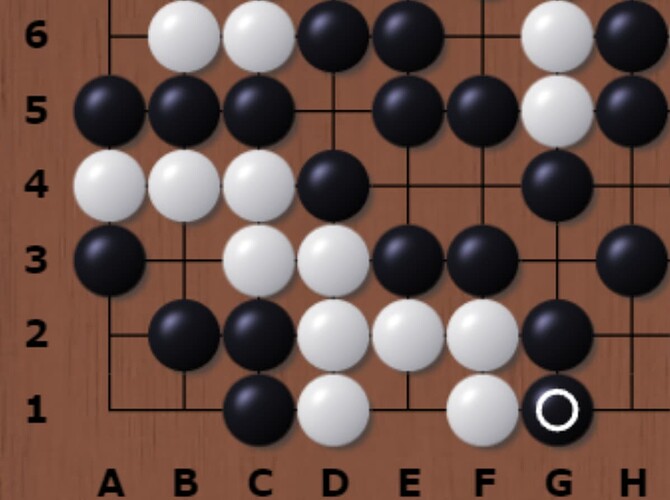 Under some definitions, the space on the lower left isn’t actually an eye because not every intersection is a liberty of my group. But I’ve been playing go for 10 years and haven’t seen something like this in a game until now! Does anyone else know of an example of this happening?

not everything that looks like an eye is the eye.

Your group has only one eye and 2 iberties. Black can win the capture race (b3 and then e1)

I understand that white loses the capturing race, but aside from a mathematical (and from what I can tell uncommon) definition, shouldn’t the space on the left be generally considered an eye? Surely that’s what I’d call it if black’s stones were missing

Ohh that makes sense! Maybe I should rename this discussion to “surprising false eyes” in that case. Thanks for the clarification!

In spite of all that - I have seen close capturing races involving eyes in my games, but probably none in such a small space. And my intuition could have mis-lead me too. So I clearly can understand your fascination,

I’ve been playing go for 17 years and would never have considered that space with a black group inside the white group an eye, false or not. I have seen plenty of groups die from the opponent filling liberties from a big space inside, but the words to describe that would be “black invaded the corner which wasn’t safe yet and killed me”.

On the other hand, imagine if there were just some more Black stones on the board 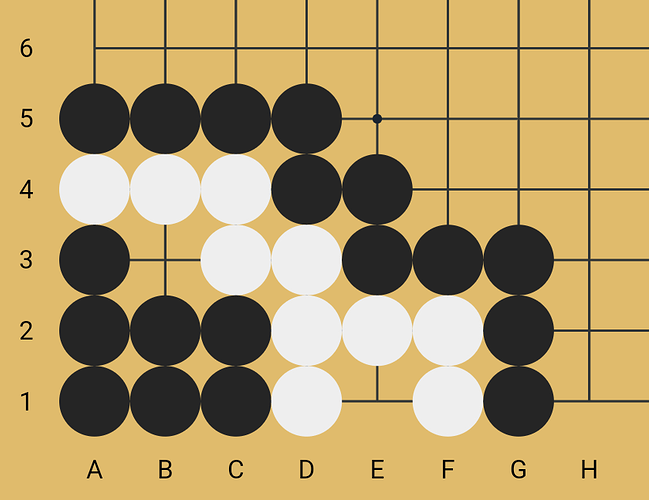 However, what is different in the original shape is that those Black stones can survive by first capturing the surrounding white group.

Another example, if White had more outside liberties, then the bottom left would also be considered an eye, since those Black stones could not survive. 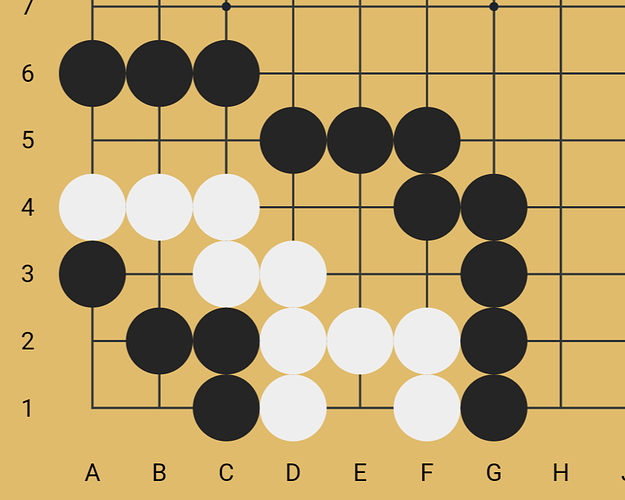 both situations for easy speech are often called “2 eyes”, but only the 1st one is real 2 eyes.

2nd still can die in ko battle as ignored threat

The second one doesn’t have two eyes. If the players place a stone alternatively, starting with White, then Black can make two eyes. But it White is allowed to play twice in a row, then White can kill Black.

The third one only has one eye. If the players place a stone alternatively, starting with White, then Black can make two eyes. If White is allowed to play twice in a row, then White can’t kill but can make a seki.

That’s probably the correct terminology, but not at all how I think about it. I’d just see 3 groups that are alive, being aware that ko threats of different sizes may or may not exist against them and only look at that closer if a ko fight is or could be happening.

There are even more ways to live than by having 2 “real” eyes, such as seki (mutual life) or a two-headed-dragon (2 false eyes in a closed loop).

On the other hand, imagine if there were just some more Black stones on the board

Hmm, but in this case white is pass-safe. Black can never fill the liberty at B3. Isn’t the eternal life evidence that it really is an eye in this case?

we may be 100% sure that its possible to create eye somewhere, but if its not actually created already, its not eye.

Note I’m not saying it isn’t an eye according to some reasonable definition of an eye. I’m saying I, as in me personally, don’t think about it as an eye because I reserve that for the smaller cases where it is a useful concept. In these kinds of larger spaces trying to classify them as “is it an eye?” yes/no doesn’t correspond with how I think about the position either subconsciously in my neural network or consciously when trying to analyse status and find good moves. Which if other strong players think similarly provides some insight that thinking about eyes* is probably not the best way to think about these kinds of shapes.

* at least for white. I do think about if black can make an eye on the corner as that could allow atari from the inside.

Probably at least in terms of the language used, it makes sense to distinguish between terms such as

I think eyes are a bit awkward to define, in terms of shapes, and which stones are needed or not, but I think this

pretty much covers it. I guess whether the word never in the sense of an illegal move vs would never play it, might distinguish it from seki. Though the concept of a “single eye” is a bit weird then, especially when talking about unsettled groups.

Anyway, I think once the liberties and space surrounded are larger than one point, it probably makes sense to just call it eyespace rather than an eye. If the eyespace is too big or the right shape, it might lead to funny things, such as the group dieing, even with two separate “eyespaces”.

Territory should probably be eyespaces of living groups, which of course includes eyes, since that’s kind of what surrounding the territory is.

Eye in the belly at Sensei's Library

Sensei's Library, page: Eye in the belly, keywords: Life & Death, Go term. SL is a large WikiWikiWeb about the game of Go (Baduk, Weiqi). It's a collaboration and community site. Everyone can add comments or edit pages.

When you say “play twice in a row”, do you think about using a ko thread somewhere else ?