The question about the name for a new thread for the iOS app goes also to you, @HongAnhKhoa.

IF it has FULL OGS functionality I’d be interested

Currently I only plan for Start new games, Analyze Mode/Conditional Move, and Puzzles. What other features need to be implemented before you would consider it “Full OGS functionalily”? Literally replicating all features to the app would take years

Currently I only plan for Start new games, Analyze Mode/Conditional Move, and Puzzles.

Puzzles I personally wouldn’t need as I do them with Tsumego Pro on the iPhone.
And the others are nice already for a beginning

Literally replicating all features to the app would take years

and make it a reasonable price for the update, like, say, 3–5 € every time you add something?
If App Store (which will mean some trouble also) then make the updates something that could be purchased in-app as a “power-up” or something?

I’m quite sure a total price of ~15–20 € would be appropriate for such an app, but yeah, I guess it would probably mean a full-time job with no sure income, so… maybe spend the time on something more worthwile.

Now we have an extra section for #3rd-party-apps, thanks @anoek!

The other threads that folks might want to watch (even if it is not “your” OS, especially developers):

The thread where this all began:

Are you a developer? Want OGS on a mobile device? (Android and iOS app development thread) 3rd Party Apps for OGS

Awesome! (And much needed) now the Android thread is under 600 again

Some screenshots of the new feature: 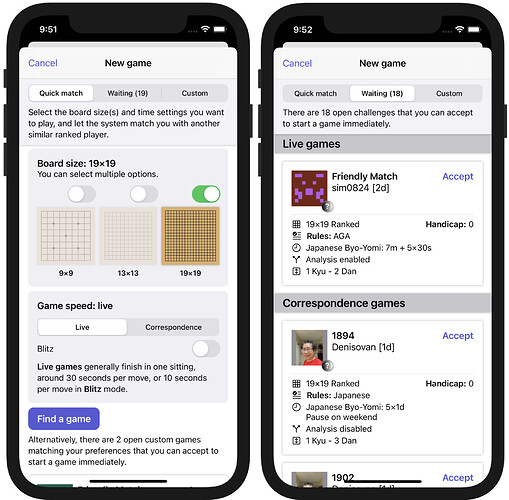 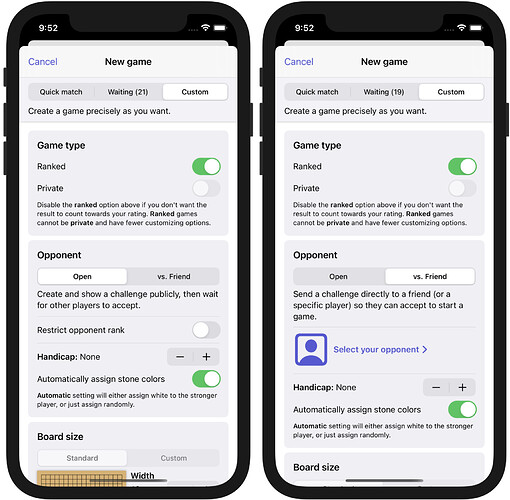 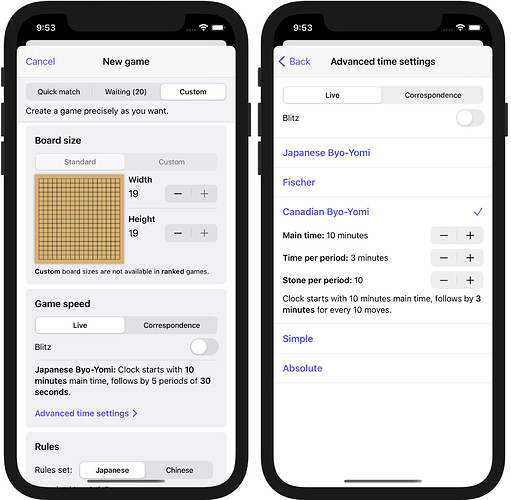 I have been reading several posts on the forum about this feature recently (for example); so when working on the design of this feature, I tried to solve some of the issues raised. You can see in the screenshots that:

This is a bit different from how it works on the website, but similar enough to not confuse people who use both the website and the app; and I think it is clearer for new users. However, that is just my personal take on it; so let me know what you think

I’ve just downloaded TestFlight and this beta release on my iPhone 12. Really excited to try it out - I’ve been wanting a OGS client on iOS for ages and yours seems very polished. Great work!

Somehow my laptop decided to stop working while I was preparing the app for 1.0 release

. I guess I will be unproductive for a while…

Hi, can I make a suggestion? I would be great that when you are about to play a move you need to click the place where you want to play your stone and then click a button to accept it, I am suggesting this with the intention to minimize misclicks (since we are playing on a touchscreen).

Good luck for getting a new one. Those M1 beasts are allegedly awesome, but I for one will wait for the next prod. series, when they have a little more experience, when they (hopefully) have ironed out the bugs in Bug Sur. I’m even skipping Kakalina.

Hey I just tried the beta it seems to work pretty well. Just 2 observations. First it doesn’t make a sound when you place a stone it would be nice to have that feature, second I couldn’t find the analyze mode.

Hi, thanks for the feedbacks

. I have not gotten to implementing those features yet.

The sound is just a matter of finding a good sound file I can use so I might just sneak it in some time soon.

The contrary, thanks to you for doing the app. Maybe just add to see previous moves for now.

Any idea when you will release the first App store version?

Probably next week, if everything goes well

Looking forward to it. If you plan to monetize - please offer a version people can purchase outright and avoid Adverts. I find those very distracting when playing

Any plans to offering simple forward/back navigation on the moves on a game? It would make the app much more useful for correspondence games.

Any plans to offering simple forward/back navigation on the moves on a game?

Yes, I do have plan to implement that first, before full Analyze mode.