Thanks to this thread, and this PR, there is now an OGS setting to hide ranks and ratings! [image]

brings to the fore an interesting question for me: how much does knowing your opponent’s rank affect your play?

Clarification: in ranked games, I mean.

I think the answer is “actually, it does!”

It seems to inform decisions like “will they really be able to live in here?” etc.

I see it all the time in teaching games. Students know what moves they should play, but are too afraid, even if it’s basic or fundamental. It’s just because of the large rank difference… they think they need to back off or play submissively or that I can come up with some amazing move that kills everything.

It does for me a bit. I find myself taking risks I wouldn’t normally take if it seems like they won’t know how to handle it.

I thought to myself “yay, I will turn this on right away, and get rid of this whole silly concern about rank”…

… then “wait, now how do I decide whether this move is too risky??”

I thought to myself “yay, I will turn this on right away, and get rid of this whole silly concern about rank”…

… then “wait, now how do I decide whether this move is too risky??”

… “wait, won’t there be some mod duties where I need to know user’s rank? I don’t want to be constantly turning it on and off…” haha

Would the orange “Show ratings” button on profile pages be enough for this? At least you wouldn’t have to go into the settings menu, but then you would presumably have to visit the users’ profiles more often.

When I play significantly weaker opponents I always get myself in trouble because I’m stupid like that. But often opponents play something too timid and I’m able to get away. I think it might be related to being significantly underranked.

Yeah… maybe… but I keep coming back to “what if” haha, maybe I’ll try it out and see if it’s actually a problem…

Funny, I too find myself playing the player versus playing the game. However, I’m too aggressive with weaker opponents and too passive with stronger ones.

I think this feature is great for me in that it will allow me to simply play the game to my fullest. No matter how hard I try, I always find myself playing the player, versus the game. However, I have a deep desire to play the game, because I know my progress is directly related to continually pushing the envelope of my own skills.

But if I play differently against weaker opponents, that really qualifies as having a good time or messing around. In this way, I am wasting valuable time that could have been invested in playing seriously. That is one aspect and I feel it is important. However, if I am playing to my fullest strength against weaker opponents, it is unlikely that my skills are being truly tested.

On the opposite end of the rank spectrum, I find myself playing too defensively or too timidly against SDK’s. The result is that I often end up with a single small living group in my 9x9 games. If I did not know their rank before hand and simply played the game how I would play a 10 to 14 DDK, then I could progress naturally by having my skills tested, while not letting my opponents rank influence my choices.

Usually I play carelessly, making semi-intentional dumb overplays and not reading much yet I still win half the time. The ranking system works exactly as intended: matching my opponents to my level of lazyness.
However against 5+ stones stronger opponents I focus and sincerely try my best. But it is rare to be matched against an opponent with so much higher rank than oneself and thus most of my games are quite poor.
I think hiding ranks could help me be less lazy. At least for the early game before the moves reveal it (in case opponent is not strong).

It does for me a bit. I find myself taking risks I wouldn’t normally take if it seems like they won’t know how to handle it.

I’m too aggressive with weaker opponents and too passive with stronger ones.

lol… this is interesting. for me its the opposite, when i play against weaker players i am satisfied with the moves i would chose intuitively and just play them, when i face much stronger opponents i overanalyse and keep looking for the move of all moves, because i want to do “something special”

. most often this confuses me more than anyone… i find myself trying new, risky moves, instead of playing calm

timing of resigantion is also something very much influenced by ranks. i think i typically resign sooner against a stronger opponent.

timing of resigantion is also something very much influenced by ranks. i think i typically resign sooner against a stronger opponent.

This is definitely true for me as well.

Giving this a try right now, it is weird and a little scary

.
im not sure wether ill like it yet, but great implementation anyway

“I don’t consciously vote based on popularity, but I clicked View results before voting”

Anyway thanks for informing me of this feature. Is certainly welcomed. I’m always unreasonably overwhelmed when I see the letter “d”, and probably lose a lot more because of that.

I once won against a guy in real life tournament - was an exciting game - only to find out later that he’s 3d, but never managed such thing online. So not knowing opponent rank surely help me keep cool.

Update: my progress so far with “not knowing opponent rank” T_T 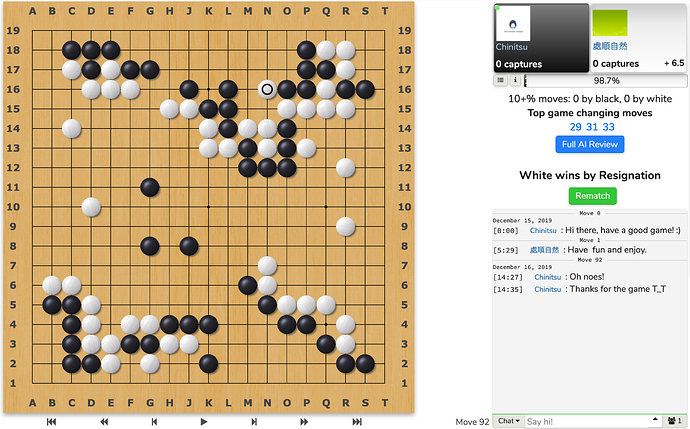 hey, for all you know you lost to a 9 dan… no biggie

Should I make any hilarious commentary on the fact that the creator of Got Stats? wants to hide rank details on the main site?

Edit: Yes I should.

I’ve been trying it for 5 days now and actually (especially thanks to the reveal rank button on each profile page) this is entirely manageable. There are certain awkward moments but overall I’d say an increase to QoL

Wow seriously everyone, it does help! (At least from my experience)

For proof my rank have boosted all the way to 1k since turning off opponent’s rank. I even had wins against 1d and 2d!