Cheers all Go players of the world !!!
Today I started to practice playing with the Board in a 45º while playing and I could see the Geometry in general much better then in a normal position.
I wander if that choice could be implemented so we can also choose the Angle in witch we see the Board in our Screens ?
Some can figure triangles better then Squares.
So, having that choice would be nice.
Battlefields aren’t nailed to the ground, or to an angle, they move.
Everything moves through out Fractal Universes.
For some, more then others, this comes “naturally”…

Thanks and GO well…
Alex

Thanks, I consider being always an “heretic_erectus” as a virtue…

Have you tried ctrl+alt+arrow key?

although it only works on some GPUs…

Yup and my Mac won’t do a thing about it.
I think this would be a job for the “Visual String Programers” in this Site.

Just measured the board on my screen, and it’s a perfectly square board. How would rotation affect it?

Japanese style boards would be affected by rotation, because the aspect ratio is uneven to make up for the optical illusion of a vertically compressed board, stemming from the “isometric” player’s perspective.

Chinese boards, as far as I know (I have one doubling as WeiQi/XiangQi board), are square.

If you want to play on a diamond, I recommend baseball.

Exactly Verlane !!
Thanks for the correction. I did made the change in the original post.
Thank you

Haha, I thought it was a joke

well I want my board as big as possible though.

I mean a 45º view Smurph; It was my mistake at expressing my idea.
And Yes, it would only work on a perfect square board.
Be Well Go in peace 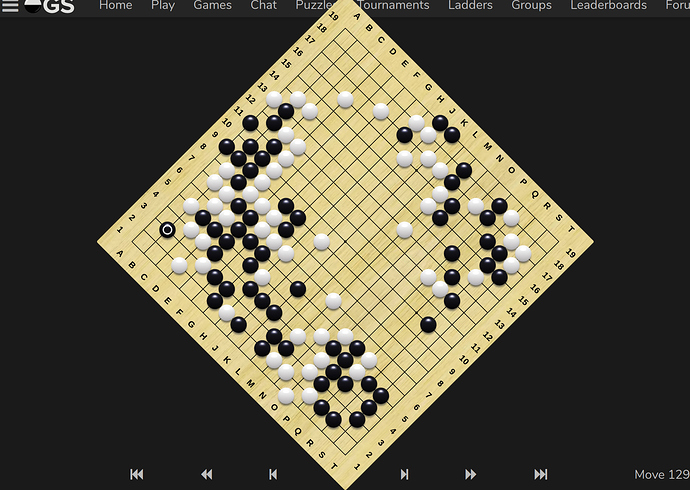 The two obvious interim solutions are:

Open up your javascript console (firefox: ctrl+shift+k) and type:

I want to see Alex playing a whole tournament game with his head at 45 degrees and his opponent trying to keep a poker face at what he presumes is a high-level psychological attack.

To prevent neck problems id suggest tilting both head and monitor by 22.5° in opposite directions.

I find that image so disorienting it makes me feel nauseous!

I automatically tilted my monitor to look at it

first of all: i love the ogs board and how smooth it´s programmed. But: 2 – 4(°) –selections of the go board would be really fine, thats true.