How about a general thread for trick play discussion?

We have an old thread about how best to defend against them, and a newer one about whether or not they’re “wrong”, but not a basic space for posting and discussing them.

I wanted somewhere I could post this diagram from 2006, that I found on Bruce Wayne’s SL page. 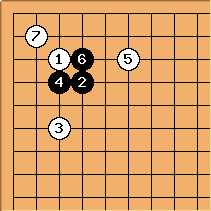 ③ and ⑤ are trick plays. ④ is a correct response but if B plays ⑥ to try and capture the corner then ⑦ uncovers the trick. The W group in the corner is alive while B is without a base and already pressured.

However, Bruce doesn’t say where he believes ⑥ should be.

I tried the above on OGS AI and it says ‘meh’ about effectiveness of the trick, and suggests 6 as is. I guess the baseless group is not that useless…

Although 7 is a good tesuji for miai connection to know, black is still fine in that position, and actually doing a little better than if White had played a usual joseki after the shoulder hit (that’s why it’s not joseki). However, although this position is objectively bad for white, it is still a treacherous position and it’s easy for black to make a mistake in the continuation which would give White the lead, particularly if White has studied the follow ups. Quite a lot of unusual moves are like this: bad if the opponent answers correctly, but could end up good if they mess up.