I started using Leela to review my games on OGS.
After the game is finished, I download SGF files and use Leela’s analysis to see where I made my biggest mistakes and which move Leela would suggest instead.

Is there anybody that do the same?

The results are very interesting but also a little disturbing form me.

It looks like me and my opponents frequently make “gifts” each other. Actually, it looks like I’m able to win games only thanks to my opponent’s mistakes and vice-versa.

Look at this histogram: here I’m white. All the lines climbing up are my moves. All lines going down are my opponent’s. Sometimes we are able to keep the level for few moves and then, again, someone gives away something. 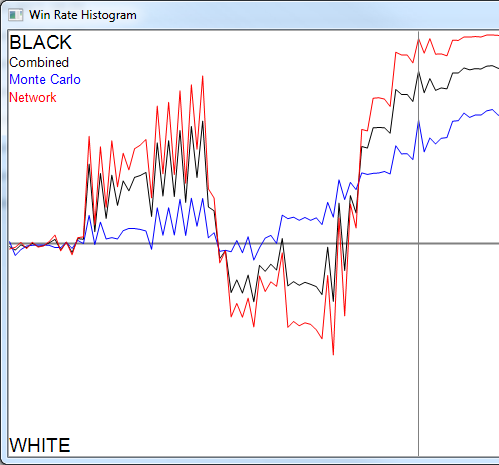 You’re showing a graph of winrate estimates. It shows black on top and white on bottom, so I assume positive (y) values (above the x-axis) indicate black’s advantage and vice versa. It’s not visible for us at who, at which point, made a move though.

I assume you’re trying to say that everytime white (i.e. you) made a move, Leela adjusted black’s winrate positively and vice versa.

That would be the expected result, since every move except the one Leela deems best will by definition be a surprise to Leela, lowering its expected respective winrate for the player “making the mistake” since it assumes best play (according to itself).

In other words, to Leela, every move except its own is a mistake (until it realizes its own evaluation mistake).

If you don’t mind the tongue-in-cheek, the above method is opposite to the general kyu player’s formula, assuming worst play on behalf of their opponent.

I hate using leela as teaching tool, i think it only reads out 1-4 moves with highest net prob% and just gives up on everything else. Move i’ve played isn’t usually even in top10, so leela might just make >100 simulations on it and leave it with 2 move long PV. It would be nice to get some feedback on my own moves, instead jsut seeing what has higher winrate. (better computer would let it run simulations faster, but on 8yo laptop it’s just not that helpful)

Not sure if it’s a factor, but i’ve also noticed that Leela tends to overvalue ko-threats in losing situation.
I mean that it just keeps telling that best move is to play biggest ko threat when every other move has a win% of 30% or something like that, even if there is no ko on the board.
So maybe when the game is pretty much decided, every move is worse than wasting the biggest ko threat.

Perhaps you are humanizing too much Leela

Surprise and pride are feelings that we can find in a human teacher. Leela just says: “according to my algorithm, the winning rate for this move is nn%”.

The y axis is 100% win for black on top and 100% win for white on bottom. The x axis lies on 50% probability.
At the start of the game the estimate is 50%.
Leela estimates the winning rate for each move, so graph will show the estimate for your move, whatever move you decided to make.

It seems to me that very often (if not always) “good” moves are only able to maintain the same winning probability as before, while “bad” moves diminishes it. This is a very unnatural perspective for me, because I usually start the game thinking that “all is open” and “nothing is mine yet”, so I feel that I “take” something for me when I attack and that I “maintain” something when I defend. Obviously, sometimes I also feel I “lose” something, very often actually.

The win rate chart tells a different story: both players are equal 50% probability at the start, so they already have “half of the cake”. They lose the game if they give away their cake. It’s surprising for me but also fascinating.

This is another interesting topic.
When we look at Leela’s “best moves” we can’t have any explaination, so we have to imagine it.
Sometimes it’s hard for me to understand the logic of some move, especially when I look at the PV sequence.

It happens frequently that best move isn’t sente, according to PV.
Here is an example: move 1 is the best for Leela, but doesn’t need an answer from white. Maybe I’m too low rank to understand. 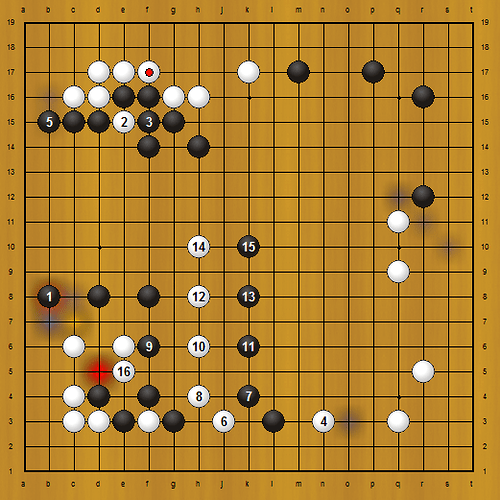 I will put more attention also on ko-threats in my next reviews.