Very naif question: do you count your points during game?

Playing on a computer it’s great because I can see at any moment how many points each player has.
But on a real physical 19x19 board, that seems a daunting task to me.
And sometimes the point difference is small.

What do players do? They look rather at the big picture? or keep track every move? or in the end is strategy+chance that makes you win?
Or maybe it’s me that I’m slow in counting because I’m a beginner?

Counting is extremely useful, especially in the late middle game I think.

I am fairly slow at counting. Even worse: I can’t remember partial counts at all. Being able to keep those in mind would enable me to quickly update a count after a few moves. (Like: top right was 15 points for me, top left 20 for the opponent, hasn’t changed, all that has changed is lower half, so I’ll only count that now.) That would ne nice.

I guess one could specifically train counting quickly and also keeping the counts im memory. So far I couldn’t bring myself to do that. Other ways to improve just are more fun (to me).

I’ll be honest here, I rarely try to count the board – sometimes I can be winning or losing by as much as thirty points and not notice. Typically I just eyeball it.

Counting is a very good habit to get into, though.

Only when I feel that the fightier sequence is too much of an overplay, so I count whether I really need to get into it. So only a few times a game.

I almost never count. But when I do “count”, I only estimate roughly. Usually on the opponent’s turn if he thinks long enough. Maybe once or twice during a game. Right before a big decision to know whether I’m supposed to calmly defend or be more aggressive. And also in the endgame if I see a potential yet unlikely problem in my formation I may count and only defend it if I can easily afford to lose a point (by playing inside my area).
Btw I count in pairs (2 points at a time).

Maybe this will help you.
By the way the more you count, the better you get at it.
Same goes of course also for estimating territory.

A little game I made to practice counting quickly Go Resources

Try it out here: https://count.4tc.xyz/ I mainly made this for myself, but hopefully some other people will find it useful too! Counting a real go position (in an ongoing game) involves several different skills, this is just for practicing the purely mechanical part of counting the territory on the board. I believe that by getting quicker at this part, counting becomes more fun, and you’re likely to start doing it more often in real games. Let me know if there are any issues with the page, or…

I wish could count

I’ve had times where it’s not even my game, or for a game that’s finished and when I count more than once I get different answers (I mean a digital game, not physically re-arranging stones). Actually one time Sabaki had a bug, and that time I could’ve been counting correctly

I have a similar problem as

I am fairly slow at counting. Even worse: I can’t remember partial counts at all. Being able to keep those in mind would enable me to quickly update a count after a few moves. (Like: top right was 15 points for me, top left 20 for the opponent, hasn’t changed, all that has changed is lower half, so I’ll only count that now.) That would ne nice.

Sometimes I forget what the partial counts are, even when trying to add up one sides points.

Recently when watching a game and kibitizing I do try every now and then to estimate the score especially if stronger players are there too, to see if we roughly agree on what’s what.

Maybe this will help you.
By the way te more you count, the better you get at it.
Same goes of course also for estimating territory.

It also has other people sharing their methods of counting too.

In summary it would be great to be able to count and make decisions on it in a game. For me I am a bit slow at it even when it’s someone else’s game. It makes it difficult then for instance in byo-yomi

Counting is a skill that people love to debate its usefulness. For one thing, counting is necessary for evaluating just how big an endgame is and comparison to others, but also a lot of more common endgame can (and often are) be memorized.

The controversial side of things is counting when a game is in progress for the sake of deciding what the best option is. Pros (such as Kageyama Toshiro in “Lessons in the Fundamentals of Go” and Akira Ishida/James Davies in “Attack and Defense”) have been saying counting (as in knowledge of who is ahead, and an estimate of how much) is very important for years, but there arguments that knowing the margin of victory might be useless (or counterproductive) for amateur play, but some of the cardinal sins of counting include playing too passive when you are ahead, too aggressive when behind, or just plain counting things that are not territory yet as if they are. These authors also recommend simpler “counting” schemes for amateurs where you estimate by comparing the size of groups/territories because many amateurs using more precise counting schemes can often come up to an estimate that is way off (which I would wager has more to do with “counting things that are not yet territory as territory” than anything)

I spent some time in the AYD run by Inseong Hwang, who will repeatedly remind you that counting is important (he has a gambling analogy that he would use whenever we took unnecessary risks while ahead), and will teach various methods for doing so (usually recognizing common 10-12 point shapes to speed things up), and I’ve counted chinese in some over-the-board games during endgame to know exactly what I needed to secure a win (as I would only need to count my side to get an idea).

There is a book (in English) about counting written by a professional.
That’s how important it is.

Now myself it happens sometimes that I do it, but rarely more as 1 or 2 times in a game.

Then there is the comparison tactic. If you played a 3-3 invasion and opponent also did, you can assume the areas are equal and not count them. Just remember to ignore the approximately equally sized pairs of groups.

I usually only do a very rough estimate of surrounded empty points (ignoring captured stones, dead stones on the board and komi). Like “that area looks really big” and “those little groups are maybe equivalent to that big area”.

This is surprisingly accurate in most games, but extremely off in some games. I can never tell how many points each player has individually, but I can usually tell that one player is about 10 or 20 points ahead of the other.

Although I realize that you probably have to put more effort into it than that to improve, it feels wrong to count every single intersection exactly.

Instead, i usually have the feel on who has played more stones which are not creating any territory, so i can estimate who is losing in most cases. In those cases where thats not enough, i also estimate territories by comparison, like “my corner here is about the same as his corner there, this group is worth komi, this side has maybe same as that…”

On 9x9 i usually make a quick count when get is almost done, that too on comparing the territories. Often board gets divided, so i can just like ignore the 1st and 9th lines, since they just cancel themself out. Also, i’m horrible 9x9 player, prolly because i don’t count the board any sooner xD

Counting is a very good habit to get into, though. 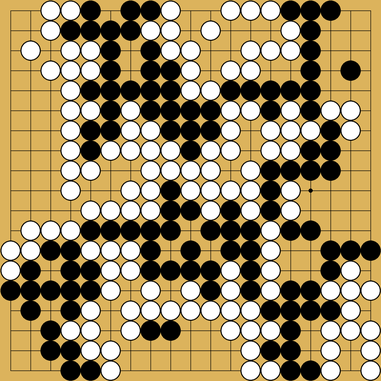 Because I wasn’t counting at all and thought that I was behind by a lot, I half-heartedly attempted to stop the invasion at the end (even passing!); turned out, that cost me the game!

Not sure this would be possible in blitz but I enjoyed this vid about counting mid game to inform positional judgement. 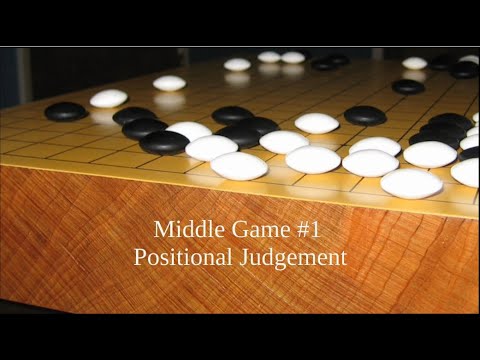 Can you add more positions? This is cool.

I count fairly quickly by structuring territory into groups of three. It’s a tip I learned from reading a book written by a pro. For example here, it takes no time to figure that White has ~4 and black ~3. 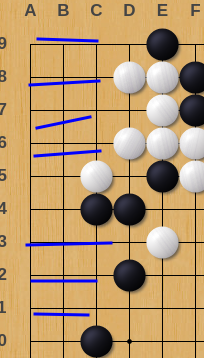 not sure what you mean.

Or maybe it’s me that I’m slow in counting because I’m a beginner?

I missed that question in my first amswer.
You can postpone your attempt to count for later for sure, simply enjoy playing and try whatever come in your mind. If you can memorize what you tried and compare with what happened, that is a lot to improve.