Thanks for bumping this post, I had forgotten about it. As well as having cool names for 9 x 9 openings, GoQuest allows you to browse players and games by opening and retrieve rankings of players for each opening. This functionality is not obvious but it is there. To find it, start on a player’s page (yours for instance). Look at their most played opening, and there you will find a table of other openings they have played. For each of those openings you can click through to rankings of other people who have used that opening and games where it has been played.

Thanks for that! With 7.0 komi and Chinese rules, I have the openings figured out this far:

More info: Percentages are Black’s chance to win, as shown by KataGo, but not necessarily from the starting position. After trying all the likely follow ups, the percentage often changes further down the game tree.

Sorry to be dense but what are the percentages? Win rate for black?

And how were such win rates calculated? Data from strong human games? AI analysis?

Caveat: I didn’t spend time digging through variations like mark did and only stuck with mostly the given positions. And it’s definitely the case that the winrates change as you go down, and as KataGo discovers moves it was wrongly under-or-overvaluing, and even at this many playouts in some of the positions the winrates keep fluctuating by multiple percent, and would also vary run to run if I retried the analysis. So keep that in mind…

But I did use a very large number of playouts.

Using a recent 40 block KataGo net and a minimum of 1 million playouts per each position with a percentage annotated in this SGF, here’s an SGF annotated with the evaluations of the above openings and some additional notations on a few of KataGo’s preferred moves and where it thinks some of these openings are mistakes.
9x9openings.sgf (1.8 KB)

Anyone should feel free to dump this into OGS or some other format that is easier to view while browsing.

@alemitrani is that a function only on the mobile version?

Yes, I think so - the functionality of the browser version is very limited.

I did a series of 20 KataGo v KataGo 9x9 games, and here is the opening distribution:
11: The first five moves of Andromeda, except the 6th move is different 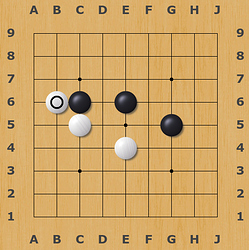 Am I right in thinking this is the most general 9x9 opening thread?

I played this fuseki as Black just now, against @alemitrani : 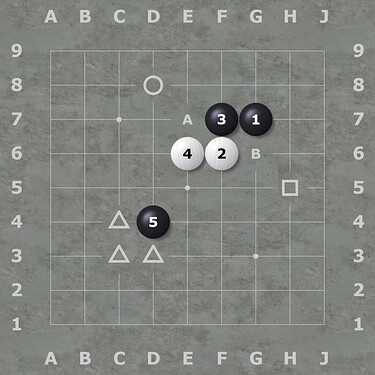 The main choice of line appears to be between A 口 and B O. (In the game we actually played A B.)

Either way, my feeling is that it’s slightly better for White.

This opening can be thought of as just one of a family with (5) at any of the triangles.

Opening with 3-3 causes a loss of 2 points, so yes it’s slight better for white

If you like 1. 3-3, I find the pattern below interesting for Black, though White may still be leading. 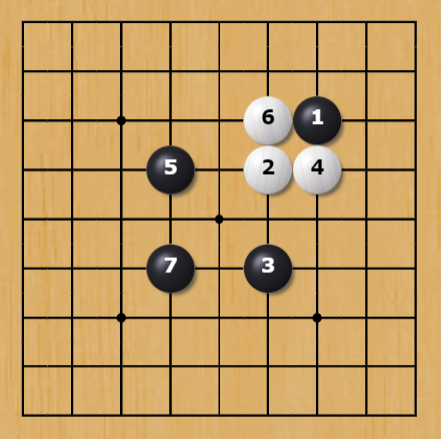 I enjoyed this game after your 1. e8. That move also loses a point or two, but it was fun. 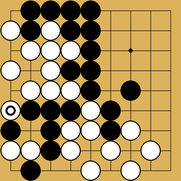 What would be the best openings to study as I see some have fallen out of favor? 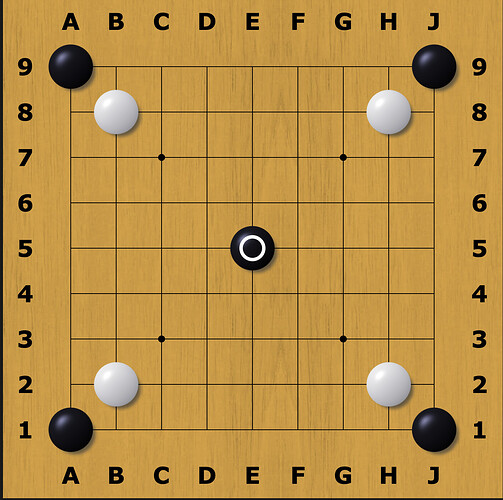 To be honest I made this one up myself

Never put it into practice, but rather curious how the game would proceed though.

One for the category weird openings.

Surely some fun experimentation. My guess still is that w stsnd much better as black, the tengen won’t be enough against the 4 corners.