Since this thread is getting long enough that I can’t remember myself what I’ve covered already, I’ve now added an index at the top for easier browsing.

* It’s not game-breaking to allow suicide in no-pass go, but it would have a larger effect on the game than it does in regular go. In particular, it would affect the point values we’ll calculate at the end of this post.

This ruleset is significantly simpler than regular go in these respects:

Despite the lack of mention of territory in the rules, territory is an emergent goal of the game, because the player with the smaller territory will usually run out of moves first! I say usually, because the value you can expect to get from your territories in no-pass go is a little bit different from in regular go. Let’s see how it plays out in some simple examples. 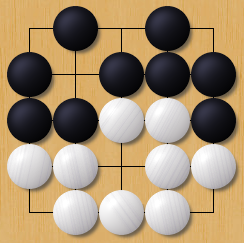 On this board, black has 4 single point eyes, and white has 3 single point eyes. Since passing is not allowed and suicide is illegal, the only moves available to both players are filling in their own eyes. Which eyes they choose to fill does not matter much. The game might proceed in this way: 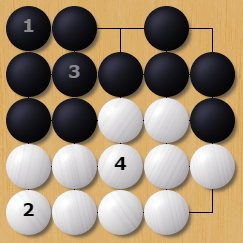 The last move is quite bad since it is self-atari, but white has no other choice as she ran out of safe moves first. Black of course captures: 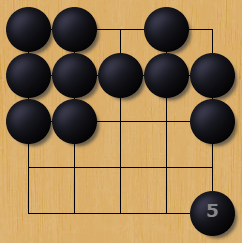 White can keep playing on for a little while longer, but by now the situation is hopeless. Eventually we’re going to reach a position where white has no legal moves available: 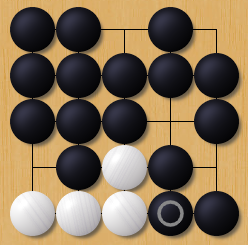 There’s no need to play it out to the bitter end like this: white can resign the moment she is forced to reduce her group to one eye ** (or at any earlier point where she can foresee that this is inevitable).

** The claim here is that if white is currently out of moves, the situation will not get any better after her group is captured, since black will be able to make at least as many moves as white underneath the captured stones. This is not true for arbitrary board graphs, but I suspect it is always true on grid boards.

What we saw here is that due to black having one more point than white, black was able to force white to run out of moves first. The outcome of the game in this case is the same as it would have been with territory scoring.

Note: If both players have the exact same number of moves available, then the player to move is the one who loses.

How many points do black and white have in the position below? 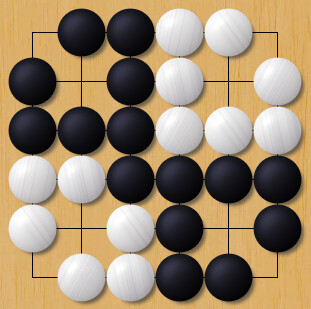 In territory scoring, we would count 4 points for black and 4 points for white. In no-pass go however, what actually matters is the number of moves each player can make before being forced to reduce a group to one eye.

Counting in this way, we see that black has two points, and white has zero points. In general, for every group that needs two eyes to live, we need to subtract two points from its territory.

This so-called “group tax” is a common property of simple rulesets (including no-pass go, no-pass go with prisoner return, and stone scoring). 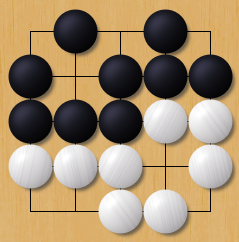 In this scenario, it may look like both players have the same number of moves available.
Indeed, if black plays first and simply fills in his own eyes, he is going to run out of moves first: 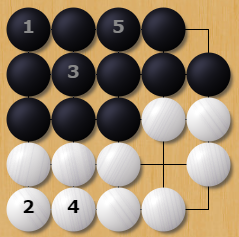 But black has a better strategy! He should take the opportunity to play inside white’s two point eye: 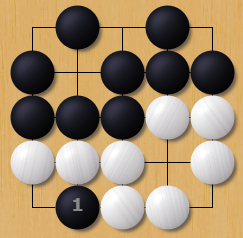 White is still able to make the same number of safe moves, but black was able to sneak in an extra one, so now black wins: 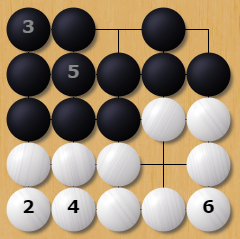 The takeaway is that larger eyes are worth less than they look. You would rather have two single point eyes than a single two point eye!

The value of a two point eye

Is it possible to count the territories in a way where we can easily see that black is winning here, without having to play out all the moves?

Could it be that a two point eye is worth precisely one and a half moves? There are a couple of ways of motivating that this is in fact the correct value. First consider this:

No matter what happens, white will always be able to make two moves inside her own two point eye.
(don’t worry about the group tax for now - we can ignore that while counting individual eyes and subtract it from the total at the end)

Depending on whether black plays first inside the eye or not, black will make either one or zero moves.

Since both white and black playing first in the eye is gote (there is no rush for the opponent to respond), we can treat these two possibilities as equally likely. Thus the expected number of moves for black is one half.

White does not care about the total number of moves she can make, but only about how many more moves than black she can make. From her perspective, the value of the 2-point eye is:
[2 white moves] - [0.5 black moves] = [1.5 white moves] 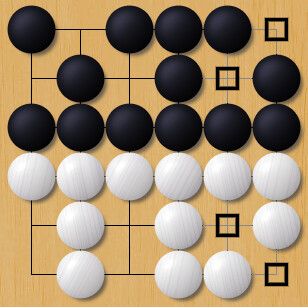 Let’s set aside the square points as eyes and only focus on the left half of the board. Black clearly has 3 moves available in the top left, and white will make 4 moves in total by filling in the bottom left.

Furthermore, no matter who plays first black will be able to make exactly one move in the bottom left.
(when one of the players plays inside one of the two point eyes, the other player will respond in the other)

Both players have 4 moves in total, so the position is balanced, and whoever moves first will lose. The outcome is the same as if white had simply had three single point eyes.

In conclusion, the no-pass endgame can be analyzed in exactly the same way as the regular endgame, using Combinatorial Game Theory. To play no-pass go well, it would be useful to have memorized the values of common small eyes, as well as the value of moving next in these areas, to be able to play the moves in the correct order.

What would a high-level game of no-pass go on a 19x19 board look like? The difference wouldn’t be too drastic in the opening stages, but as the game progressed, you might notice a tendency of the players to prefer “narrower” territories, where they can more effectively limit the number of moves the opponent can make inside in the future. Towards the end of the game, possibly even before the borders have been completely finished, you would start to see some “invasions” that are dead in gote, but give enough extra moves to be more valuable than a regular endgame play. And once the borders have been finalized, there would be a drawn-out eye-filling stage, where players make moves both in their own and in the opponents territory.

This final stage is theoretically interesting, but from a human perspective it’s a bit dull compared to the more exciting opening and middle game. Even for enthusiasts of simple rulesets such as myself, no-pass go is in some sense “too simple” - but I still find it very useful to have some understanding of it, for a couple of reasons:

Towards the end of the game, possibly even before the borders have been completely finished, you would start to see some “invasions” that are dead in gote, but give enough extra moves to be more valuable than a regular endgame play.

This is partly what I find happens in Redstone also, when it hits the no-pass go style endgame. Sometimes a doomed invasion can be sente-enough to even remove potential eyes and chunks of eyespaces while dieing

That could happen before a gote endgame of hane-and-connect type move.

Could it be that a two point eye is worth precisely one and a half moves?

I wonder if it’s the same value when you can capture your own stones in Redstone. In comparison Black can get two moves in a two point eyespace belonging to White, but White will be guaranteed at least one move no matter what, or two if they play first

Very interesting, is there a way to implement komi? White allowed N passes?

Yes, N passes for white is one fine way to give komi! If for some reason one really wants to stay away completely from passes, one can simulate something almost equivalent by setting up a position where white has N guaranteed moves available.

For instance, using a third color of stones, we could setup a 9x9 game with 7 komi on a 13x13 board: 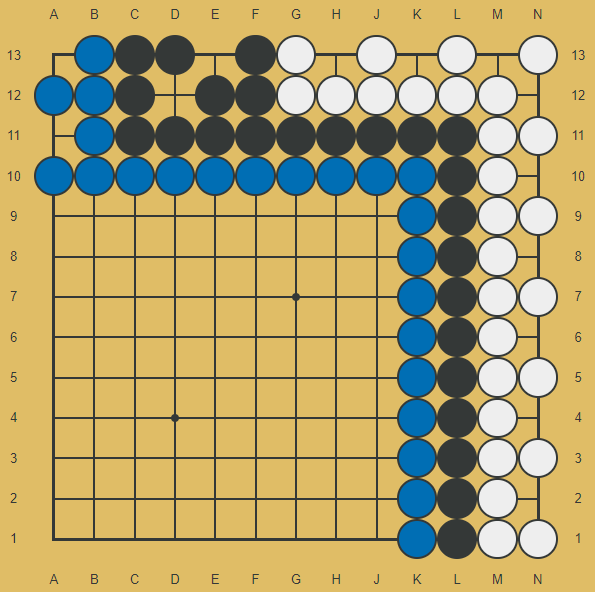 image595×592 10.8 KB
I’ve made sure to keep some black stones around the white stones, so that white is definitely lost if she is forced to reduce that group to one eye. (if white is only surrounded by blue stones, it’s not obvious that black will be able to make more moves than white in the empty area after white is captured)

Of course the third color isn’t really necessary, it’s just a trick to be able to set it up on a single square board. You can also let the board be the union of a regular 19x19 board and a board like this on the side: 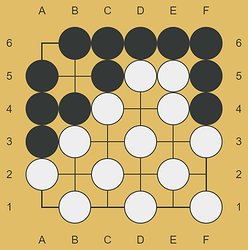 I say that this almost simulates N free passes, because there is one important difference between passes and these guaranteed moves: passes do not change the board state. So for instance if a Molasses ko happens in the game, white would rather have moves than passes.

Conversely, it might be possible to construct some position (perhaps involving Frozen life) where white would rather have passes than moves.

I think the problem with no-pass go - and to an extent, strict superko which also lacks proper passes - is that it’s too different from real go (beyond the obvious territory differences).

Nearly a century ago, before formal passes were invented, games ended on verbal agreement. There were various disputes whether it’s ok to leave certain kos unresolved (for extra point) with excess threats. The invention of passes eliminated most such questions with clean logic (passes can eventually deplete finite ko threats, force ko stabilization).

Passes are also important for analysis with environmental coupons. Adding such coupon stack could change things too much unless the game already had infinite 0-point moves (passes as fully functional moves) and there was no “zugzwang” to begin with. This is essential in modern go.

Passes are also related to the (mis-?) interpretation of the ko concept (like “recreation of a position”). Since the ko rule only forbids immediate ko recapture, the question whether passes lift (simple) ko bans does not arise. After a pass, a recapture is not immediate anymore - so if the board changed or not is irrelevant. Imo this is what 1-Eye-Flaw illustrates (and how one recreation of a position may not even lead to perpetual repetition).

is that it’s too different from real go

If you think of it as a go variant this isn’t necessarily a bad thing.

If you want it as a competitor for the “one true modern rules of go” then yes you want it to be the same as the other most popularly used rules.

as a go variant this isn’t necessarily a bad thing

Sure, and some people are quite fond of no-pass-go as a theoretical / experimental tool. What I meant to emphasize is that in modern go, the role of passes is deeper and goes beyond what may seem at first glance (without even mentioning their central role in Japanese L/D).