What do you think of this position 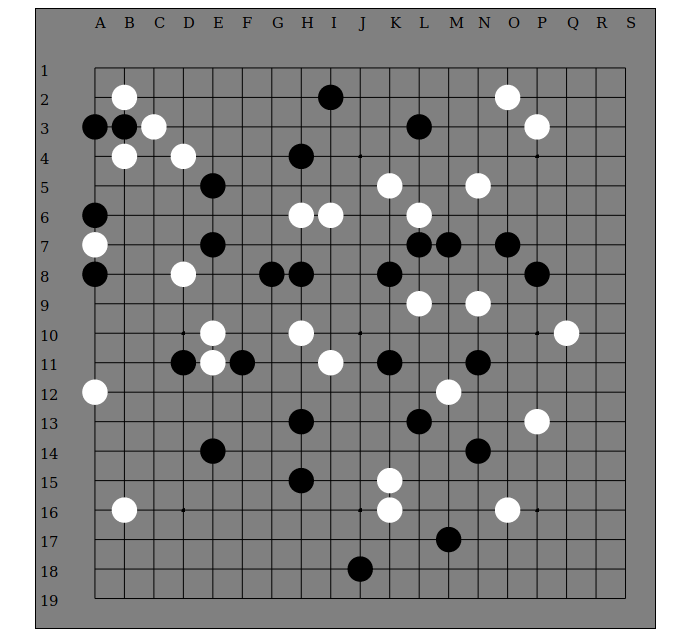 black to play. played by one of my friends that knows nothing about go (both black and white are played by him). Any opinions?

I see a go board with stones on it, so I like it.

Looks like he loaded the stones into a shotgun and fired them randomly at the board.

It looks like a nice game for beginner, i hope your friend keeps on playing!

I used to play games as both black and white shortly after I got my first real 19x board. I didn’t play more than 10 games (it’s not terribly engaging), but I recall that the final score was x+0.5 at least twice and if memory serves, the other results were similarly close.

I wonder how well leela’s eval works for those kind of positions it’d never get itself into (and thus doesn’t have much feedback on from training) ???

Umm … when komi is used (and then it is usually some y.5 value) isn’t the final score always x+0.5? Or am I not following your reasoning correctly?

Only if y is not equal to zero.

They’re strings. Are you actively trying to misinterpret what I wrote?

Looks good for white, doesn’t it? White has corners and sides and can probably get something living out of center.

They’re strings. Are you actively trying to misinterpret what I wrote?

Well, no, I’m not. My original intention was to be slightly humorous (obviously failed). Now I’m trying to interpret what you wrote …

I guess you are simply over my level – not surprising, as I am also not known for being especially clever.

Sorry if I got angered you. That was not the intention.

I think the confusion is as to what “x” represents. I think you intend it to mean “black” or “white”, whereas people seem to be interpreting it as a number, with a score like “10.5” (for black, probably? Negative scores for white? I’m not sure.) As a number, it wouldn’t explicitly connote a close game, which seems to be what you’re describing, based on context.

Of course, if x is a string, and not a variable, the logical conclusion is that one of the players is named “x”, which could be confusing in itself

I think the type of x is player, not integer, here.

I wonder how well leela’s eval works for those kind of positions it’d never get itself into (and thus doesn’t have much feedback on from training) ???

I find this idea fascinating. Can we find a (probably automatically esotheric) board position that is obviously in favour of one of the players to a decent human, but gets misinterpreted completely by Leela?

Can we find a (probably automatically esotheric) board position that is obviously in favour of one of the players to a decent human, but gets misinterpreted completely by Leela?

Yes (and yes, I had to include the whole quote for effect!) 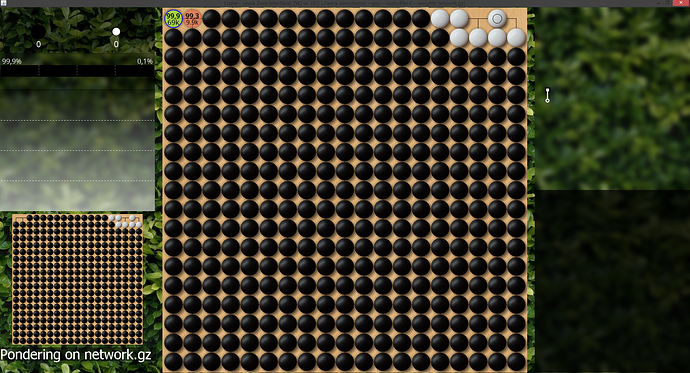 with all their might, it is easy to fool the bots with the simplest tsumegos, as long as the position is completely unreal

you can try it at home. (and it is not a quick capture before the bot catches on… I let it ponder for several good minutes)

Ok, this satisfies me a little too much

For even greater enjoyment, watch as the bot realizes its foolishness: #humiliatingbots
(and yes, Lizzie really thought filling one of her eyes is a better move than capturing the 350+ group, huh)

Tell him/her to send me a challenge.