What is Go? (not like how to play it)

I’ve been asked what is Go? At first I thought, “It’s a board game” but that didn’t feel like it could capture the complexity and amazingness of go. So I thought sport (don’t laugh), but that didn’t seem that right. In the end, I said it’s a mind game. The person who asked it (my friend) said, “ok, cool.” WHICH SHOULDN’T BE THE RESPONSE TO GO!!! I think it should be a mind sport, what about you?

It’s a combinatorial abstract strategy game. Like chess, or draughts, and so on. You’ll either get the response “ok, cool” or “tell me more!” depending on if the person is into that kind of thing. The truth is that most people just aren’t.

It is a board game with very simple rules. It would take about five minutes to explain and start playing. Then the fun starts. Start believing in reincarnation, because it would take many lives to capture the essence of the game.
Still interested in what go is?

I seem to pass a lot of time with it anyway…

Are you……cheating on your wife?!

Who told you she doesn’t know?

Not mentioning the cultural diversity of OGS…

This question is quite interesting.

There are several groups of games that might be called “primary families”, including:

The fact that Go has only a handful of ancient variants, and is out on its own branch of the tree, makes it peculiar. Go possesses one of the telltale features of ancient board games, which is that it has undifferentiated pieces and could therefore be played using pebbles or seeds of different colours, making it accessible to early societies, especially the poorer classes.

Go is also interesting because its history is obscure. The claim that the game is 4,000 years old is often quoted, but actually uncontroversial evidence for it doesn’t seem to extend far before a couple of millenia ago. Note that Wikipedia refers to a restrained estimate of “more than 2,500 years”. For much of the time, we don’t know exactly where Go was being played, by which ethnicities or social classes, using what level of equipment or with which precise rules.

A US antitrust suit might break up Google. Good – it's the Standard Oil of...

Republicans and Democrats finally agree on something: big tech’s power threatens our economies and our flow of information

I think that the reply given by the dragon orb in Dragonlance is quite fitting for Go, as well. As far as I can remember it went like this:

That’s a shame and pain to get this search result, especially more if you consider that Google financed alphago research.
You can’t say they are not aware of what go really is.

That could make a new topic on its own.
From what I heard, go is older by far as chess like games which originated in medieval ages. I have no clue on other games so I can’t say it’s the oldest of all games.
Even if there could be proof of it’s “not so old nature” go has some kind of mythology, which make it’s origin mysterious and sounding old.
Essentially: to be a way to predict the future (Tibetan origin) or to be a way to educate the (stupid) son of the first chinese emperor.

The oldest types of games appear to be:

Then, from the time of classical Rome:

And later, from the Medieval period:

Ah, I was categorising backgammon as a race game with capturing. In Lost, John Locke describes backgammon as “the oldest game in the world”, and there’s good evidence to support that claim, with boards and dice being found from around 3000BCE in Iraq and Iran. It may be related to the Twenty Squares Game or Royal Game of Ur, the distinctive boards of which are widely found.

Wikipedia suggests that some form of draughts is also around 5,000 years old and of, again, Middle Eastern extraction. It also claims that playing cards were first created in Medieval China.

Mahjong comes from the 19th century, as does perhaps gomoku.

This is a board for the Twenty Squares Game: see what I mean about its signature “waisted” shape.

Prof. Irving Finkle commented that backgammon probably displaced the 20SG because backgammon’s luck–skill ratio was “50-50” compared to the 20SG’s “60-40”. 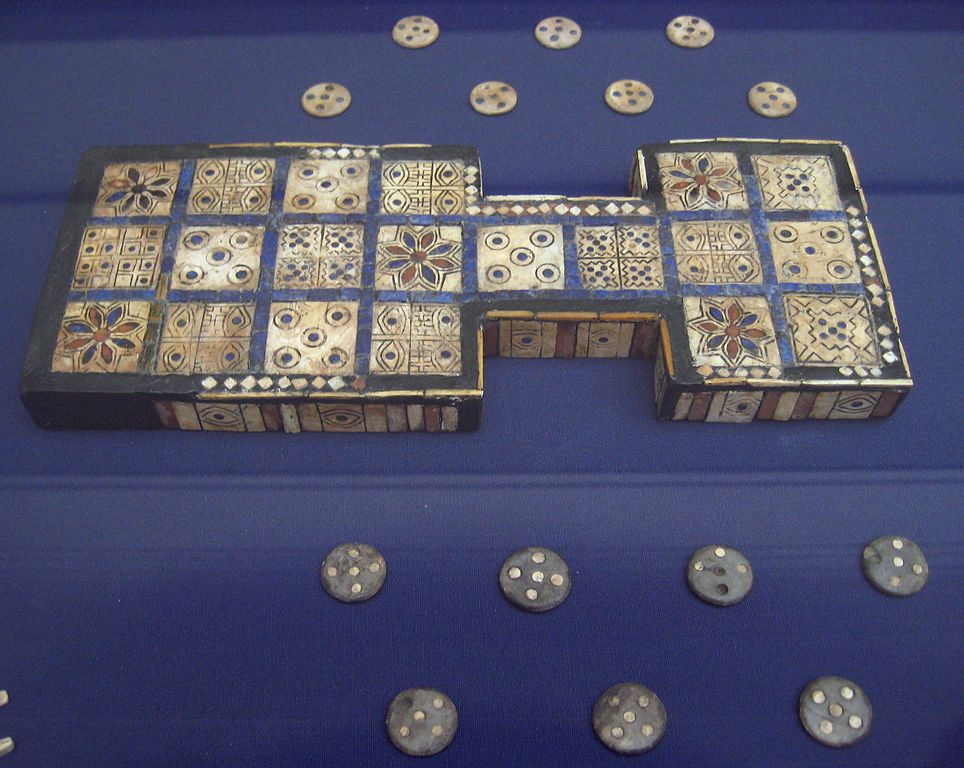