When asking hard questions like this, it tends to be better to explore variations yourself with the help of AI, rather than throwing a million playouts at the starting position. It’s also far more interesting an exercise

Seeing as the OP has stated that they are not interested in the wall games, I’ll just make one more post about it here, and if anyone other than me is interested we could maybe start a new thread

All these setups could inspire a new class of “shape game”-like variant. Even if a superhuman bot might settle the question for a particular corner size, it could still be an interesting game for mere mortals.

Choosing the size of the corner gives a natural way to handicap this game for differing skill levels.

Anyone want to play a game of this “big corner invasion” variant?

Of course I want to play it!

I sent you a challenge for the 9x9-invasion.

The game is underway, in case anyone wants to spectate/kibitz 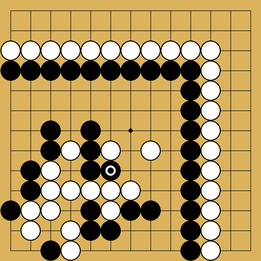 Question about a 5-4 shimari joseki Joseki

What do you think of White’s invasion at 3-3 (R17) in Play Go at online-go.com! | OGS? This is something common enough that I’ve played both Black and White in the position in over-the-board tournaments, and I still see it fairly regularly in online games today. Should the 3-3 invasion be added? (I think so) Is it Ideal, Good, or a Mistake? (I think it is “Good”) What line(s) should be associated to it? (the kosumi attachment at R16 is most common in Waltheri) [image] Or, instead, …

In your very first diagram (with 3 stones) black is comfortable. he can easily run out or make eyes in the corner. A play at 4-4 gets out. Also black can attach underneath or play kosumi twice.

Not only does it matter whether there are opponent stones nearby, it also matters how strong those nearby opponent stones are. For example, if white has the corner entire surrounded by a living group, even a bit further away than your examples, then an invading black at 3-3 is dead, because its eyespace can be reduced so easily using white double-skip or large-knight’s links from the white group. (My comments might be redundant to the comments about walls; they are just meant as a reply to the OP.)

I gave this one a try and found that I had to expand the playing field to a 12x12 corner for there to be any significant chance of life, but KataGo thinks White is likely to win:

I think this is about as big as I can go without messing with komi. No idea if it means anything.

It seems like AI is happy to solve “black to live” or “white to kill” tsumego in this configuration. For example, here’s what it thinks of Cho Chikun Intermediate #41:

And here Black only needs the tiniest territory to win. I don’t think this would be a good way to evaluate whether a particular opening slightly favors white or black.

If black can survive at all under the aggressive attacks, it seems like that means he’s probably going to live on an empty board and in many other situations. I would like to have a collection of such strong positions involving the 3-3 point to study for use in games! 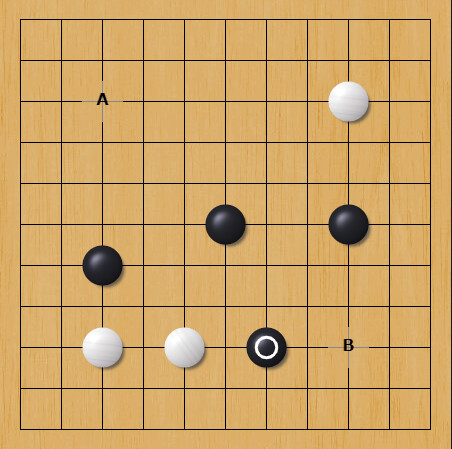 I don’t remember exactly what I was thinking, but I suppose that somehow I considered my two 3-3 stones to be strong, A to be a safe way to claim another corner, and B to be a hopeless invasion. So I played at A and gave up on B.

A safe way? I dunno it will give a chance to play a double attack move on the Left by black

Exactly what happened! I had to think hard before saving the top group, and then the bottom one became a really tough fight. Somehow it worked out well.