Why do people cancel correspondence games right after start?

I’ve started playing correspondence around start of july and since then I have had 17 games cancelled by a player right after accepting my invite. Today the same guy did it twice in less then an hour, forcing me to create the invate third time (which was then cancelled by another player again)!

It is so annoying! I just can’t stand it, why do people do it? Should I report them or what? Are there no rules regarding this issue? I thought playing after accepting an invite is just a part of being polite. Why would anybody accept if they don’t want to play, I just don’t get it, and this happens to me almost every day. I try to start a new game every day and I must do it multiple times because of such people instead of just waiting for a player that wishes to play.

Do you have this problem also? Does it happen at bigger levels? I currently limit my games to 20 and 21k and this is still an issue.

Will be glad for any suggestions.

I have played a lot of correspondence, but didn’t really see what you are describing. However I mostly liked Ladder or correspondence tournaments rather than just open challenges. Perhaps at your level many players are new and don’t realize they are accepting a correspondance game, and then cancel once they see the time settings.

I think sometimes people accept a challenge without really looking at it, then realize its correspondence and cancel it.

But there is a separate table just for correspondence, how can one miss it? It would be nice to have an option to automatically renew an invite after such a quick cancellation.

I have been experiencing the same issue so challenge if you like and I’ll gladly accept. I’m around 20 kyu at the moment on 9 by 9 and probably 22-23 kyu on 19 by 19 as I just started playing on the “big” board.

kajmaj879h
But there is a separate table just for correspondence, how can one miss it? It would be nice to have an option to automatically renew an invite after such a quick cancellation.

To quote Nick Sibicky “The Internet is stupid”

I don’t really play correspondence, but with live games I sometimes have to cancel an invite I accepted. The reason is that I click on it, glance at the settings, and hit accept, because I know it will disappear soon. Then, once I get in game, I throw out the “hi {newline} gl hf!” and click on game info. I then carefully read the settings to make sure it’s something I want to play. Usually it is, or at least something I’m willing to play (I don’t really care for unranked, but I don’t usually cancel over it), but sometimes it’s not, and then I cancel.

I assume something similar is happening.

I have similar experience.

You can’t make board to pop up in correspondence games. So most of the time all I see is “game has started”, “game has ended”.

I already addressed it here: Game board doesn't pops up when someone accepts my correspondence challenge

None of the developers replied anything though.

I have the same issue with starting correspondence games and I am around the same rank. So it’s indeed possible that this is rank related. I think only one out of every five correspondence invites that I create, actually becomes a game.

It’s quite annoying, having to create new invitations each time. Now when I want new games, I just make five invites at the same time. Most of them get cancelled anyways

I’m 10k and I don’t really remember that happening even once.
Do you have any non-default settings that could be annoying, such as disabled analysis?

I do have analysis disabled, but you can see that when accepting the challenge right? Is ‘disable analysis’ really something that people cancel games for? But that’s about the only non-standard thing I have. The time settings are pretty equaly to ladder games and apart from that only rank-restrictions (but those are irrelevant in this matter).

My settings look like this, I think it is quite standard (unfortunately in polish, but should be not a problem): 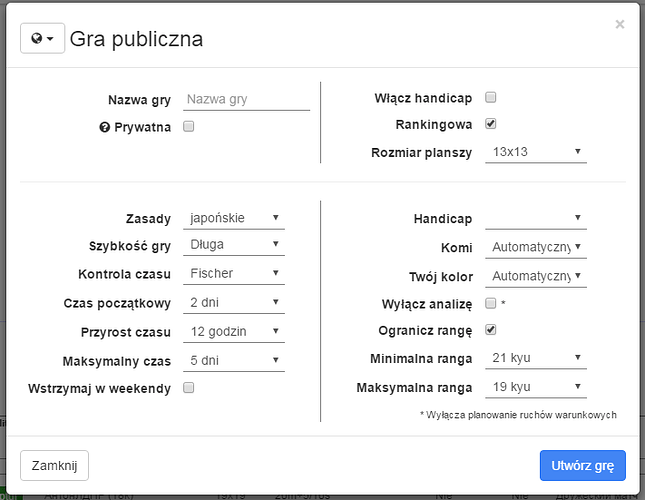 I never had analysis disabled so this is likely not the issue.

Hmm, does the empty handicap field mean automatic handicap? I don’t recall. Some people really hate playing with a handicap for some reason, and many accept a challenge before reading out the settings. Especially lower kyus, I guess.

Nope, handicap is only enabled when the top box is checked.

@kajmaj87 your settings are roughly the same as mine. Apart from analysis that I usually have disabled. I see no reason for it to cause that many cancellations. And still, you can see all those settings before accepting the game.

Perhaps it’s a rank thing, the per-time setting rank and overall rank difference which makes people quit. However I also have this problem when my overall rank is 20k and correspondence rank 21k. Not much to be scared of.

My correspondance and overall ranks are also roughtly the same (+/-1). I’ve disabled the handicap because of situations when i require was playing with someone who had 25k correspondance, but 17k overall and he had 2 stones hadicap because he was “worse” than I am.

Also when I played at even lower ranks (24-23k) I had people saying “35h?! Seriously?” or something like that before cancelling. I think this is rank related, I really hope it changes quickly and people are not doing this at say 18k or so.

Do you have this problem also? Does it happen at bigger levels? I currently limit my games to 20 and 21k and this is still an issue.

Happened to me a lot when i was below 17k and many of my challenges were accepted by other beginners, i think it was because they didn’t quite understand time settings i had put, and simply canceled the game after realizing that i’m not going to play that game instantly.

I actually did find it nicer, than those who simply abandoned the game resulting me to win by timeout few days later

I recommend joining sitewide corr tournaments, i know most players are above your level, but they usually understand well the nature of correspondence games.

Yes, this, or any of the group tournaments who often have more (re)lax(ed) time settings … having joined a few such correspondence tournaments, I haven’t had a lack of games in the past 2.5 years.