Why does rank show differently in chat and on user profile?

I still haven’t figured this out, and I seem to have missed the memo on this aspect when we switched over to Glicko2.

What’s the difference between rank shown in chat and the “main rank” shown on user profiles? Thanks.

Edit: Also, it seems the rank is different in game chat when you Start A Review and when you’re just chatting. Is this part just a bug? Example of bug https://i.imgur.com/hnAFvpt.png

The way ranks are displayed is a mess right now. Probably a side effect of switching to the new rating system. I guess the devs are working on it right now.

I just came across this example. Same user, same game, but 3 different ranks are displayed in different places (?, 4k and 12k):

Rank in game is always the same as rank in profile.
But if you click on name it sometimes outdated in mini window.

I suspect when you first open chat window your rank is loaded. If your rank changes (playing in another tab) then it isn’t updated in currently open tabs. Refreshing the page always fixes this for me

I suspect when you first open chat window your rank is loaded. If your rank changes (playing in another tab) then it isn’t updated in currently open tabs. Refreshing the page always fixes this for me

It’s not this, because my rank didn’t change. There was less than 60 seconds difference in the screenshot I posted.

This may be the least useful reply you ever get but:

Why worry about rank? "Water finds it’s own level."
Is any of this preventing you from arranging good matches?
Just play for the love of the game and if you don’t love the game…never mind, that’s absurd.

Why worry about rank? “Water finds it’s own level.”

Is any of this preventing you from arranging good matches?

If you don’t know what rank the matchup-maker thinks you are, how do you select suitable opponents?

Depends whether or not your primary concern is winning…

You can use rank for a number of reasons in finding games - not only “if your primary concern is winning”:

And if you don’t know which rank of yours, and which rank of other people, is being used in the “limit to rank”, then you can’t use that feature to accurately achieve these goals.

I thought this was the whole point of the ranking system: to help us find suitably skilled opponents and have the game we are looking for.

If you don’t know what rank the matchup-maker thinks you are, how do you select suitable opponents?

Fair comment @GreenAsJade. I almost always use ‘Custom Game’ rather than the ‘Quick Match Finder’ but I see your point. I think it’s fair to say that both the ‘Quick Match Finder’ and the ranking display arrangements are currently works in progress so I am confident these will improve. The extreme example given by BronzeV must surely be a new account so in such a case the best result is to make the misinformation more consistent until there is more data.

Let’s keep this post on topic. This topic is about the way data is displayed on this site, not the importance of that data.

For what it’s worth, it appears that in the chat log, the rank that is displayed is the rank of the person at the time that they made the comment.

This is on display quite clearly in this game: https://online-go.com/game/9851243

My opponent made one comment at 19k and the next at 20k.

It will be great when the game history shows the rank of the players at the time the game ended.

The topic of this thread is close enough to warrant a necro, I think.

SO. It seems there’s a bit of a bug with the chat ranks, and when I say chat I mean https://online-go.com/chat.

For some reason, the ranks displayed are at least out of date for a few people (haven’t checked all). But it gets weirder. When I click the rank of someone affected by this, the first time it shows the proper (profile) rank. The second time, it reverts to something that looks to be September ranks/ratings. 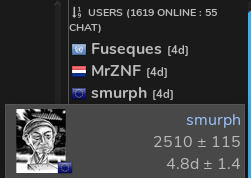 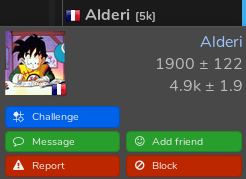 The topic of this thread is close enough to warrant a necro, I think.

Just create a new topic and link this one

When I click the rank of someone affected by this, the first time it shows the proper (profile) rank.

I tried to reproduce it.
If I open the popups of some chat users the first time, there is a flicker. I think this means a update of the cached data is made as I opened the popup. The rank is correct then. If I open the popup a second time then a old rank/ratind is shown.

Update:
I just had a case in which it was correct at the second try as well, but the old at the third.

At the same time, the first update was slow enough for me to see the popup before it’s being updated. It’s the old rating in question.

The second time, it reverts to something that looks to be September ranks/ratings

I had one case of late October rating. I don’t think the old ratings a of a specific date.

If I remember correctly, OGS uses rating periods of 15 games / 30 days or something and since (at least for me) it’s more than 30 days but could easily be under 15 games, I wonder if it has anything to do with “rating/rank” before x games. Still doesn’t explain why it shows up correctly some of the time.

I forgot to write. I get the same ratings for smurph and Alderi as you got. It doesn’t look like a local caching error.

It doesn’t fit. For you and Alderi it’s 4 and 2 games but both times over a month.
For KronosTheShinobi it’s 10 games back, less than a month and not the start/end of a rating period.

PS: The rank in the chats user list is always the wrong rank

I think I know what’s going on - when a player chats or joins a channel we store their rating information along with the message so we can later show their rating/rank information. However that doesn’t get updated per line, so if the user say joins a channel, plays a game, and doesn’t say anything after the game is resolved, their rank will be stale. So short answer, yep a caching bug.

Hm, and why does this persist even if the user logs out and back in again?

and doesn’t say anything after the game is resolved,

Both just wrote something in chat, but the ratings are still the old ratings.