Why there's so little coverage of go events?

I noticed that whenever I hear about a big go event, it’s mostly almost accidental. There’re never announcements beforehand, no broadcasts, no reviews. Even tournament brackets are hidden somewhere.

Following top-level events is a big part of any sport, but it seems that go has nothing of that sort.

I’m guessing they do in Asia. Could you clarify which country you live in and which language you’re looking for information in?

In English naturally. Even European tournaments sometimes happen without anyone noticing.

For example, Golaxy vs humans has basically 0 English articles on it (excluding my post on reddit), Honinbo match slipped through too.

I feel like we’re losing players because of it, don’t you think? Like if one doesn’t actively play, they might still stay in the community for the sake of following go news. And maybe new players could be inspired by whatever’s going on on top-level scene?

Maybe someone can code a News module for the OGS home page? I am not a programmer, but I did a mockup in MS Paint. 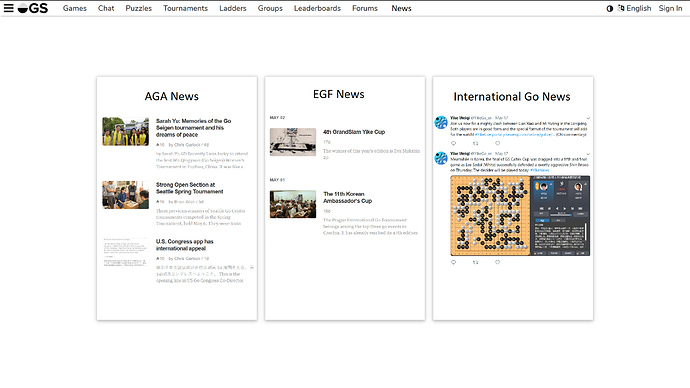 In Asia, there’s some number of non-player who follow/read go news and there’re also some number of reporters in big news agency who specialize in writing go related articles. I guess here there’s just not enough demand not enough formal platform for this. Also probably because all the top-level events are happening in Asia.

There’s also ‘fan club’ or ‘fan group’ for some top Asian player in social media… they would watch games, post memes and discuss together. Maybe we need something like this as well.

It would be nice if people who knows japanese/chinese/korean volunteer to collectively translate some game review and international go news and have a way to easily sharing it with the go community. There are top pro matches going on almost every day but sadly there’s not much coverage of that.

Creating a News module requires more than a coder. The other OGS pages are all essentially self-generating, but a News page would require an editor. Someone would need to find the news, select what to post, cut-and-paste it (if not actually edit or rewrite it), and post it. I think a News page would be a great addition, but my guess is that anoek already has his hands full with day-to-day operations.

Not necessarily. You could code it as an RSS-style feed from trusted sources and rely on them to curate it. (With permission, of course)

Let’s start from a discussion on this forum, maybe it’ll help.

Great idea with the Go World News forum discussion, but I think the idea of a page with RSS-style feeds as suggested by @mark5000 definitely should be pursued

If we could get several dedicated people to also regularly do some edits/manual additions (e.g. from the Go World News forum discussion) this would be a terrific addition to OGS

I would love to help in any way.

Unfortunately my help would be somewhat limited since I can not read Japanese, Korean or Chinese …