Are tournaments and game request rank resrictions using the old rating formula? I feel like I have seen the bug brought up but I couldn’t find the thread/post so maybe I imagined it.

I think ± confidence interval should change with time.
I didn’t play enough 9x9 blitz back then and didn’t play it for very long time
I don’t believe these numbers. ± should be big

And what if someone like 35081 returns to OGS after long time? I think it would be better if they will need to play less number of games to change their rating - it may change a lot in long time, so ± needs to increase with time.

It does (kinda, or at least the theoretic equivalent of that), but doesn’t show the update till you play a game, cuz that’s when it gets calculated (to save time calculating tons of accounts at every ratings period end for the update), at least for main rating, idk about the size/time ratings

to save time calculating

then it should update and show at least once a year

I’m not 100% sure how that would work out, as it would be an extra kink in the code (it checks to see when your most recent game was, and how many ratings periods ago it was), but it might not be too difficult to code a sort of “virtual game” that has no effect on the actual mu at the beginning of every year, but it would probably be a notable load on the server when it happens.

Nothing needs to be calculated. Purely cosmetically indication needs to be showed near ranks in table that were not updated for a year.
(graph below already has this information)

I have an old account (was 15k). So as an experiment I tried to play and rank it up to my current level (5k-1k). And dear god that was such a grind. The first 10 games were vs bots. I gave up after 20 games total and only got to 6k. One human accused me of sandbagging. Statistically 20 is not a big sample size but in minutes it is still a very long sitting.

No, no, no, no, nooo
The +/- is part of the Glicko system, it determines the uncertainty in the OGS number. It depends on the number of games played, the win/lose ratio, the time rating periods since last update… etc
It is a well defined quantity and trying to add some model of the human brain decay with time lack of practice can only destabilize the Glicko system. I think this would be a bad idea!

Nonetheless, I absolutely see the point of showing “the uncertainty due to not-playing”. Simply the +/- quantity is not the way.

the uncertainty due to not-playing

These are the same thing. What he wants is already part of glicko, it just doesn’t get calculated until the next completed game.

Oh! I apologize, I thought she/he was asking to introduce an additional term beside that!

It seems they want it to periodically update without games being completed, but that’s just not how it works.

it just doesn’t get calculated until the next completed game

there have to be indication that rank is not trustworthy without that
I don’t wish for people to think with ±0.9 certainty that I am 4.7k in 9x9 blitz (last game in 2017)
indication can be purely cosmetical

those smaller ranks are cosmetic anyway, only your overall rank matters

yes, mission of this table is to be cosmetic - but it is technical instead
it shows what rating system thinks instead of what may be useful for any human
humans needs to know that ranks that were not updated for a year shouldn’t be trusted

but if you’re not playing those board speed combos then what people think doesn’t matter, and if you do play them then they’ll update…

oh I just noticed that all your ranks have the same uncertainty, that might be a bug of some kind, as all of mine are different…

Oh I see, it’s because you have so many games that they’ve all been refined down to high accuracy 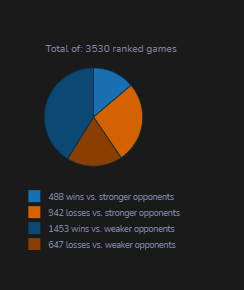 if you’re not playing those board speed combos then what people think doesn’t matter,

I will never play this combo again and that’s why it shouldn’t be trusted or even displayed
What if someone will wish co compare their rank table with my rank table? They will get wrong idea or will have to click graph for each of them.

Of course not, because you lost to a stronger opponent and won against a weaker opponent, giving the system no reason to believe that your rank may have lost any accuracy. You won and lost exactly the games it predicted you would win and lose, thus if anything the uncertainty would decrease not increase since its guesses were proved correct/accurate.

but what if I won against stronger opponent?
would there be difference if i did it next day or half year later?

FWIW I agree with stone_defender. If a parameter is changing over time, it should be displayed that way, and it is currently very misleading in the way it works.

When you play that next game after a break, it will show that your uncertainty suddenly jumped up after the game, which is not the case. Actually, your uncertaintly moved up in the intervening time and then started heading down after the first new result (AIUI).