A Program/Book that gives a foundation of the game

Hi guys I am a beginner. I know basic rules of the game. I have a competitive chess background and can see this game is far more complicated. In Chess there are courses(ChessMaster Program, How to Reassess your Chess, etc…) that give the player a foundation and introduce the main topics of the game. I was wondering if something like that existed for Go. I play games and like to do Life and Death problems. However playing, I can see I lack information to come up with a move and find myself trying to survive or fight with calculation. Im sure what im saying is super noobish please bear with me. Reading online, people say you just have to play alot and go from there. Im doing that and can see patterns building up. However I feel im being inefficient with my time and could be doing alot more if someone pointed me in the right direction. Im really looking for a system/guide that can teach me how to Really play Go. Thanks to those who reply!

You are right that just doing problems won’t do (or at least, it’s hard to find a full workout that trains every skill) and that playing can cause only slow improvement sometimes. Compared with Chess, it’s much easier to get trapped into only playing people of your level, which at the beginner level (anything from 25k up to 12k or so is your level as a beginner) is sure to teach you some very bad patterns and bad habits that will be hard to get around, especially if you don’t review your games.

The problem of lacking information to come up with a move will continue to track you as and if you improve; the game is deep and if you aren’t playing reflexively (so as to learn new things) then you will sometimes be perplexed about what to do. I don’t know of any compact web courses for Go, partly no doubt due to the translation barrier and the lower computer savvy of East Asia, but also because the theory for Go is so much less compact than for Chess. A tenuous grasp of the basics would bring you to dan-level, about 2000 ELO points or so from where you stand.

That said, there are books which give a solid introduction to the theory of the game, usually as a multi-part series. I recommend Janice Kim’s series, which is an English translation of what was very popular material in Korean baduk classes, at least for a time.

When I play I think of this. How can I keep my stones connected, How can I disconnect my opponents stones and constant calculation to win stones or get a particular area of the board(Would cutting him off work here, do I have a shot going into enemy territory, lol noobish things like that. At the same time keeping in mind territory, center influence, and the corners. This is what ive learned so far through playing and watching Hikaru No Go for like the 3rd time xD. I will follow your recommendation. But do I have the right idea at least for a beginner?

Definitely. There is a reason why it is often recommended to play a lot of losing games early on, when stronger players will basically just cut you to shreds; that’s to absorb information on cutting and connection and eyespace in the very local sense, which is what you need to hold a group together. When you can manage tactics in (loosely speaking) a 4x4 square, then a lot of the theoretical discussion becomes more fruitful.

But skimming one of your games, it seems that you are definitely ready for some comprehensive theory. You are thinking in terms of groups, cutting/connection, and large points already, but a formal introduction will help you to think more systematically about finding plausible moves and choosing among them.

When you have no idea what to do in your game or whether what you did was a good idea, I know it can be tempting to just open a book and hope to have it explain everything. I’m not saying that you should not read Go books; you should!

But way more importantly: learn from stronger players! There is no better way. Get reviews, get teaching games, replay pro games and watch lectures. A stronger player can tell you which books you should read next, and which problems are suitable for you to solve. If you can find some stronger Go players in your area, that would be best.

You can get reviews and teaching games right here on OGS.
https://forums.online-go.com/c/teaching
Post your own games as “Review Requests”.
You can also post your games for review on https://gokibitz.com/.

Hi, there is The Guide of Go Weiqi Baduk for Android, it runs on Smartphone and Tablet, it teaches the foundations of the game, it has many different kinds of tatics used by beginners. 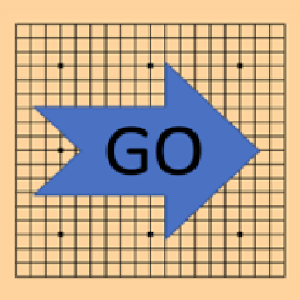 The Go is an ancient board game, is known as Weiqi in China, Baduk in Korea and Go in Japan.It helps to develop the capacity for discipline and engaging in an activity, develop local tactic and global strategic thinking, as well as developing focus for reading, writing, attending classes, and visual-spatial intelligence.This guide shows main concepts about the game of Go of opening and middle game, related to strategies of: defense, attack, invasion and expansion of territory.The concepts are ab...

I got immense benefit from reading this book; In the Beginning: The Opening in the Game of Go, by Ikuro Ishigure.

I also came to Go from Chess. Essentially you have focussed on what we’d call “tactics” in Chess. I did the opposite. I read this book and got a solid “strategic” foundation. I’ve spent my time since learning (avoiding) tactics. But that book alone got me to 12 kyu within a couple of weeks.

The book itself is a page-turner, really well written, clear, instructive, exciting - everything you ever wished a Go book could be!